On Running and Street Harassment

On Saturday, not for the first time, my dad offers to buy me a gun. I’m still in my running gear, sitting on my bed, certain I’m leaving sweaty ass-prints on my good quilt, but I’ve got no choice. I have to sit here, crammed against the wall’s one outlet because my phone can’t hold a charge, and I have to call him. He’s my dad, and I want him to make me feel better.

My pop used to run long distances, too. Both sides of my family are athletic and built for hard labor, and when my parents met and merged, they birthed a batch of strong, sinewy children. Unlike my brothers, I didn’t use my powers to win homecoming games. I never gave a shit about sports at all until one day in college, when I went through a terrible time and needed to run away—and so I did. Running gave me a way to run away, as well as a way to come back to who I was. It also gave me something to talk about with family members who had never understood my lack of interest in sports.

Sometimes, when I call my pop now and talk to him, we talk about running. These conversations feel like another, newer language we are practicing together. It feels good. It gives us a way to connect.

But today I call him because this particular run felt really bad. I’m teary and trying to tamp it down. Before I can finish describing the sexual harassment I just endured from eight separate men during the one hour, 14 minutes, and 20 seconds it took me to run ten miles, my dad interrupts.

“See, now this is why you need a .38,” he says. “Something nice and small you can carry with you at all times.”

He’s joking, but he’s not. We’ve had this conversation before. Dad lives in Michigan, and I live in Chicago, and he is frightened for me. He gets mad at the idea of my vulnerability, and that anger sometimes comes out at me.

“You’ve got to ignore them,” he says for the billionth time. “You don’t have to prove a point by saying something back.”

I hold my breath. I remember that my dad is trying to keep me safe from his limited perch in Michigan, the way he did in September, just before I got on the train to head back and he told me to keep the cardigan of his I had worn all weekend. “Here,” he said then, pushing my hands back when I went to pass him his sweater. “It will make me feel like I can protect you when you’re back in the city.”

During the last decade of my life, I have run a minimum of 20-30 miles a week. In that time I have lived on three continents. In each country, in each village, in each sophisticated metropolis or rural outpost, I have been verbally harassed, physically chased, forcibly touched, and definitely followed. The severity and type of harassment varies, but the objective always feels the same: to try and take away my power as I do the thing that makes me feel most free.

I want to explain this to my dad, but then he will inevitably tell me not to travel, and that’s not the problem. The small number of men in India who smacked my ass at stoplights, or their gentler brethren who ran alongside me while asking me to marry them, are not representative of their entire country — just like the few but ever-present men of Ireland who looked and looked without saying a thing as I passed them on slim and scary country roads, men whose dogs would chase me down for miles, don’t represent all the men in their country. Harassment is universal, and I face just as much of it here in the country of my birth.

The “best” street harassment I have ever received came from a man with one leg calling out “Do your thang, girl,” as he gave me two thumbs up. I couldn’t be mad about him. The worst was when male children no older than thirteen told me to suck their dicks as they threw debris from the construction of the Bloomingdale Trail at my head. Just for a minute, I saw them as little boys, before their faces changed to resemble the face of a man who would later back me up against a brick wall and say, slowly, “The fuck you say to me, bitch?” after I told him I didn’t like how he licked his lips and said, “Damn, honey” while staring at my sports bra. My encounter with him and his friends took place in the same month as the one with the boys who already felt entitled to tell me what they wanted to do to my body. The three words that set each pack off? “That’s disrespectful. Stop.”

On the phone, I get mad. I tell him I’ve done nothing wrong. “I’m just trying to be recognized as a person,” I say.

He goes quiet. “I know, Kate,” he says, and I can hear now that he is more sad than angry. “But you might be asking for too much.”

Runners are people who are a little bit fucked up. There is a reason we start this merciless, methodical action. While often it isn’t pretty, running saves lives, and it has saved mine. It taught me to love this body when I hated it most — through the eating disorder triggered by an unwanted sexual encounter, through the anxieties that have dogged me all my life. I run to disappear, but the very physicality of the sport has placed me more into my very self than I have ever been. I have to tend to my hurts; my blisters and scrapes, sore muscles and fatigue. I have to tend to my appetite; acknowledge that I have one, that I am hungry for everything, and that I want to grow strong. I have to be tender.

It’s difficult for me to trust men, and it’s difficult for me to trust my body, and for me, these things are terribly connected. When I run, I inhabit myself to the very edges, and then I spill out and inhabit space in a way I struggle to do in my daily, less Under-Armoured way. I move with power and purpose — not like I can never be hurt, but like I am truly alive and free, in sync with my own heartbeat. How dare you — father with a stroller, two businessmen out to lunch, man in a group, boy alone — how dare you take my running, this thing that has put me back into my body again, and use it to try and claim my body as yours? For me, running is an ache and a search and a profound act of self-love. I’ll be damned if I’ll carry a gun, and I’ll be damned if I’ll stay quiet.

This past Saturday, eight different men verbally harassed me. Two stepped into my path and said they wouldn’t move unless I gave them a high five. The murmurs, the coos and looks, all serve as reminders that I am not a person to them.

By the seventh man, I was tired. He told me he could look at that ass all day. I told him to shut up. He said to me, “Don’t worry, baby, I still love you,” and my skin went clammy with defeat. And there was something about hearing the word “love” come out of his mouth that made me want to push him into traffic.

When I talk to my dad about this, I want him to get it — how these interactions, over and over, tear at the soul. I want him to get that yes, not only am I angry, but I have a right to be. That regardless of whether or not I am polite in my response to these men, it is not my response that is the problem. I think he does get that, but I also think he still sees my anger as the thing that could get me in trouble.

Many women runners I know do not speak back to their harassers, because it makes them feel in danger. They do not need to justify their choices to anyone, and never to me. In any situation, women should do precisely the thing that makes them feel the most protected, self-loving, and okay. Everyone should do what makes them feel the most protected and okay. For me, silence feels more damaging to my health and wellbeing than anything else I am threatened with. I love this body, I have earned my love for this body, and the best way I can show love for it is to use a voice I once neglected. And so I run: with my phone, with my keys, gunless and visible, with nothing but my body and my raised voice to help me fight and weave over the long miles to come. I don’t think it’s asking too much to be seen as human, but then again, I am no longer asking. I am moving. I am me. 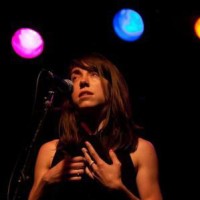 Katie Prout is a runner, writer, and storyteller who lives in Chicago with 2 bicycles and 14 plants. She writes about feminism and feelings at her blog.