This is Nichole Perkins’ first essay for The Toast. Her previous work for The Butter can be found here.

My ringtone is the theme from the Lynda Carter-led Wonder Woman series. The journal I use for ideas and outlines features a comic version of the heroine looking prettily from the corners of her eyes. I have several sets of Wonder Woman underwear that I put on when I want good luck or good sex. To say I’m a fan of the Princess of Themyscira is putting it lightly, but it took me a long time to be comfortable enough to admit it.

It seems silly now, but I was once very anxious about how it looked for me, as a Black woman, to have so much paraphernalia with a white woman on it. I felt guilty, like I was betraying part of my community because of a connection to one superhero over another.

I was born in the middle of the Lynda Carter series’ original run, and its syndication was a major part of how I spent time with my mother and older sister. When my mother wanted me to help clean, I’d spin in circles until I’d transformed into a little Black girl Wonder Woman whose bracelets would send dirty clothes defeated to the washing machine. My sister and I would repeat the campy dialogue to each other, and it was one of the ways I, seven years younger than she, could connect with her without any big sister-little sister annoyance spoiling our time. When my family would go to the library, I’d try to catch up on Wonder Woman’s DC Comics adventures, and Saturdays found me sitting on the floor, next to my sister, punching the air with whatever version of Super Friends was rerunning that day. Wonder Woman is not only badass, she’s also a symbol of family time for me.

Then I learned about Storm, the X-Men character, and fell in love with her, too. She is a fierce, capable leader, plus who wouldn’t want control over the weather? As a Southern Black woman, it’s difficult for me to trace my heritage past my great-grandparents, but Storm knows exactly who she is and where she comes from. I respected that as much as I respected her leadership and superhuman abilities. But when I searched for clothes or trinkets featuring Storm, I came up short. When the 1990s X-Men animated series took off, merchandise featuring Storm by herself wasn’t as prominent as that of her male colleagues and definitely not like that of Wonder Woman. From what I could tell, Storm was rarely on a shirt alone. I suppose I could’ve bought a doll, but I’ve never been into action figures. If I wanted to show the world that I related to an awesome female superhero, it pretty much had to be Wonder Woman, and at the time, I had no problem with that.

Then high school and an explosion of black sitcoms and films took place. Any week, I could turn to A Different World, Martin, Living Single and see someone wearing a sweatshirt with the name of a Historically Black College or University on it. I grew up within walking distance of three major HBCUs — Fisk, Tennessee State, and Meharry Medical College. How could I let a blue-eyed white woman represent me? I felt guilty so I started collecting Wonder Woman merchandise that only had the stacked Ws logo on it, no physical details of any kind. No one else prompted me to feel this way, but I thought it was the least I could do to avoid promoting a standard of beauty that had little to do with how I looked. I put aside how I felt about Wonder Woman and ramped up my talk of Storm.

As I grew older and rooted myself in Black feminist texts and criticism, my conflict about Wonder Woman grew as well. There is no shortage of images of white women as heroes and saviors, as beautiful and worthy of love. Shouldn’t I make a stronger effort to showcase images of Black women as beautiful heroes people want to love?

By this time the X-Men live-action movies had started, and my disappointment with the portrayal of Storm was sharp. In the films, she was a glorified babysitter with supernatural abilities, left in a position of leadership because there was no one else left, not because she had earned it. Throughout the film series, including the recent prequels, the main (white) female characters were featured in various love stories, shoehorned in on the action. Jean Grey is in a love triangle of sorts between Wolverine and Cyclops. Rogue and Kitty Pryde have feelings for Iceman. In the prequels, Mystique is part of the tension between Professor Xavier and Magneto, plus she has flirtations with Beast. But Storm? Well, in X2: X-Men United, Nightcrawler, the mutant Storm babysits, expresses some attachment to her, but that’s pretty much it. In a deleted scene from X-Men: Days of Future Past, Wolverine and Storm kiss, but it’s clearly something the actors have done for the blooper reel. The idea of Storm as a woman with sexual desires gets regulated to a joke, while characters like Jean Grey, Rogue, and Kitty Pryde sacrifice their powers, physical well-being, and lives for the sake of the ones they love. Even Wonder Woman on the small screen sacrifices parts of her upbringing to be close to Lt. Steve Trevor.

In the comic books, Storm is a much more realized character, who becomes a leader not by default, not because there’s no one else left, but because of her own intellectual and physical prowess. She gets to have a love life and an invigorating backstory. In the live-action movies, Storm had none of these things. For a while, I tried to speak up about the “real” Storm from the comics, but it always led to discussions about Halle Berry’s portrayal of her, then Berry’s Catwoman, then Berry’s lovelife. I felt worn down by the debates.

Maybe it was all a sign that I was trying too hard to lift Storm up above my first female superhero love — Wonder Woman. When I talked about Storm, nobody raised a fist in Black solidarity. I didn’t receive a power-up of street cred. I had been trying to cut off Black feminist criticism against myself that didn’t seem to exist. This isn’t to say that the live-action portrayal of Storm and how it could influence millions of young Black girls searching for superheroes who look like them isn’t important. It is, but I’ve found that my connecting to Wonder Woman more closely doesn’t make me less Black, less of a Black Feminist, or less of a person.

As I’ve gotten older and more settled into being a feminist, I’ve realized I don’t need to make a competition out of who I hold in esteem or why, whether they’re real or fictional. I’ve returned to owning and displaying Wonder Woman paraphernalia with likenesses of her face and body. I can draw strength from a blue-eyed white woman who stops bullets with bracelets and from a white-eyed African woman who commands the weather. Both characters show aspects of leadership, kindness, and strength that should be highlighted in their live-action portrayals so audiences that don’t have access to a steady diet of comic books can see that heroes are more than men with brute physical powers. Once I discovered that William Moulton Marston created the Princess of Themyscira using aspects of bondage and submission, and that his polyamorous relationship was also an influence, I fell even more in love with her. Now, when I wear a shirt with Wonder Woman brandishing her lasso, I do so with pride. 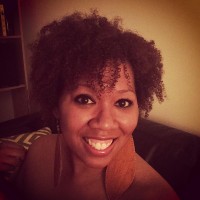 Nichole Perkins is a freelance writer, based in her hometown of Nashville, TN. She began writing about pop culture, race, gender, and sex at the website Postbourgie.com and has written for BuzzFeed, Think Progress, Talking Points Memo, and rogerebert.com. Nichole also writes poetry, fiction, screenplays, and is currently working on a collection of personal essays.