The Ubiquitous Roving Plants of the Starship Enterprise

Star Trek: The Next Generation (or Next Gen, as it will always be known to me) is one of the formative shows of my childhood. In my memory, every time I snuck through the family room after I was supposed to be in bed, my parents were watching one of three programs: Next Gen, Poirot, or Nick at Nite reruns of The Mary Tyler Moore Show.

Next Gen, I have since learned, premiered on my eighth birthday. We share an unbreakable cosmic link. My dad might as well be Captain Jean-Luc Picard, in both looks and worldview. The resemblance is, I’m sure you’ll agree, uncanny:

The show ran for seven seasons, towards the end of the era in which TV special effects were still noticeably dinkier than movie effects. Now, thanks to computer magic, even relatively modest Syfy shows look pretty good. Shows like the Battlestar Galactica reboot, whose run ended in 2009, often look amazing, easily as cool as a movie. Not so during the Next Gen era, 1987-1994. The show’s budget was actually quite large: $1.3 million an episode, according to Wikipedia, which at the time was one of the biggest around. Unfortunately, that did not translate into an ageless depiction, especially given the complexity of bringing to life a giant starship, space battles, embarrassing holodeck noir fantasy, and numerous makeup-and-prosthetics-heavy alien races. If you rewatch the episode in which Tasha Yar dies, the emotional resonance of her untimely passing is pretty severely marred by the fact that her killer appears to be a man in a bedazzled garbage bag trying to shake staticy unspooled VHS tape off of his arms.

One of the strangest quirks of the Enterprise-D, one that can’t be explained by budget constraints or outdated technology, is someone’s penchant for jamming crappy dentist’s-office potted plants in places where they make absolutely no sense. Ficuses, corn plants, banana trees, succulents: this starship, which is flying IN SPACE, is littered with them. Like, okay, we can all agree that Star Trek is not hard sci-fi, but we are talking about a place with no natural light whatsoever. And before you say the plants are there to help clean the air and produce more oxygen: a) these shitball rubber trees are not making enough air to make a difference, and b) there’s an entire arboretum on the Enterprise full of beautiful plants.

It’s like after they had finished building the sets to resemble futuristic starship environments—grey, sterile, spare—they called in somebody’s tchotchke-loving aunt to add some nice little touches and soften up the look. Why? Once you start noticing the plants, you realize they are in every shot. Was some poor key grip or best boy tasked with dragging the pots of corn plants around to different sets so that no character was ever filmed sans plant?

Here is the briefing room. It has a plant in each corner.

This has the effect of creating shots in which a character has part of a plant sticking out from behind their head while they’re making an impassioned speech.

Picard looks like he is wearing a kicky fascinator.

They’re not just accidentally in shots, either. Over and over again, a plant is framed in triptych with two characters experiencing sexual tension. Here’s Riker, flirting with an ambassador’s aide:

Please note that Jonathan Frakes backed up a step during this conversation so that his body was not blocking a clear shot of that plant. Here they are again, Riker’s stand-in boner flora clearly visible by the door:

Somebody lugged the same boner plants into Troi’s room for her uncomfortable sexual harassment scene with this negotiator:

Lest you think I’m cherry-picking, here’s another example of the Captain, talking to a woman Q sent to seduce him:

Geordi, looking at a lady’s butt and also a plant:

Wesley Crusher ineptly flirting with a girl while a plant looks on:

Data’s awkward kiss amongst the succulents:

And I mean, that’s the thing: a lot of these plants are objectively terrible plants. If some overthinking set designer wanted to use plants to represent blossoming sexuality, fertility, quivering stamens and all that, why not get some better plants?

Who put all of the spotlight on these plants that are, by any reasonable measure, entirely shitty? These sad little guys are lit so brightly we cannot see the actors’ faces. That is a commitment to space plants so serious it’s downright troubling.

Okay, so now picture your standard-issue starship bed. Does it have a little bromeliad village growing out of the headboard? Because apparently it fucking should:

Above is a succulent party at Picard’s.

Riker’s living headboard. (It’s a different essay, but the silver lamé sheets and plunging male night-clothing necklines on this show are fascinating.)

Counselor Troi’s standard-issue bedtime bromeliads. Good thing all of these space people had such green thumbs and lots of time to cultivate the plant life in their private quarters!

You seriously could not get away from the houseplants on the Starship Enterprise. God forbid you walk down this hallway and not find a plant:

Or here, does this little fellow look familiar yet?

Oh hello Ensign Ro, what’s that behind you?

Even on the holodeck, a place where anything can look like anything from any time or space, the plants make themselves known.

So how can this be explained?

Perhaps a florist once saved Gene Roddenberry’s life, and this is how he was repaying her, in plant purchases. Perhaps there was a subtle genius at work here that a dumb mortal like me could never hope to understand. Perhaps this is all a hidden Ur-story: the plants were running the show all along, with the humans and androids as their gullible puppets. Whatever the case may be, I must salute all those poor overworked plant handlers on the crew whose job it was to cart around and spritz those ugly houseplants so that viewers escaping into space an hour at a time could see and marvel at them. Sirs and madams, bravo. 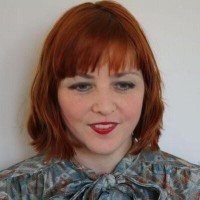