Grief in the Diaspora

Tasbeeh last wrote The Names They Gave Me, which is one of Nicole’s favourite pieces.

We don’t have much time to grieve before the guests come pouring in through our door. The news travels fast to all our kith and kin scattered across continents. Facebook statuses and tweets dispatched, emails sent to all appropriate community listservs. Instagram photos treated with a somber filter. Tiny digital memorials erected across the cyberspaces we’ve forged over the years to replace the physical homes we lost in migration. The internet connects us to the motherland, each fiber optic cable a tether to the people that we love. We used to buy phone cards, but now we have Skype.

But when the news finally reaches us, it is through a crackling international phone call, at some hour before we pray our morning prayers. Mama spends the next few hours on Viber, her anguish transmitted across borders and oceans from cell phone tower to cell phone tower.

I am still asleep. I wake up to her knocking on my door. Her face is flush with sadness.

Tasbeeh, she tells me, jdayda died. Your grandmother passed away.

And then: We have to start cleaning. The guests will arrive soon.

They told me there wasn’t much to do for a woman in Libya but they were wrong. There are more weddings and funerals to attend than we are capable of scheduling. The event of someone’s nuptials or death occupies most of our time. One day, we hear a story about a woman whose husband-to-be died in a car accident on the way to his wedding. That’s two-for-one for the guests, someone joked morbidly. We all laughed.

I don’t remember much from my first trip to Benghazi but I do remember the vivid patterns of the funeral tents, all dusted lightly with dirt. I remember the zimzamat singers, their voices frayed by a lifetime of cigarette smoke, at the weddings we attended. I remember the eternal heat of a North African summer, the humid air bonding the fabric of abayas and evening gowns to my sweaty skin.

Mama says she enjoys the funerals more than the weddings. She hasn’t seen many of her friends in Libya in more than 15 years. At weddings, they arrive dressed in extravagant regalia, their faces heavy with makeup. I don’t recognize them, she says. The music is too loud for conversation. There is no chance for reunion.

But funerals, too, are social events, and better ones for socializing. The burial is an affair reserved for close family and friends; instead, the community gathers at the grieving family’s home. Their houses are not large enough to accommodate these crowds, which is why the funeral tents become necessary. Friends who haven’t seen each other in a long while get reacquainted again. Sometimes the conversations give way to laughter. A typical funeral tent would feel much more jubilant that the occasion would suggest.

One sweltering summer, a close relative passed away, and we opened my grandmother’s home to those who wanted to pass along their condolences. From the kitchen, where the younger girls were preparing tea and small finger foods to serve to the guests, we suddenly heard wailing. A woman had collapsed to her knees in the foyer, overcome by her sobs. Who is she? I ask my cousins. They don’t know. One of them rolls her eyes.

Funerals are stages for the drama of a life that teeters always on edge of the mundane and the absurd. Performances of griefs are not uncommon. It happens at every funereal gathering.  Usually an acquaintance, or a distant relative. Sometimes she’ll begin beating her chest, or slapping her own cheeks. Another woman might join in on the howling, and they all compete for the most passionate display of emotional torment. You can take these spectacles for what they look like, which is a shrill demand for attention.  But mama says that sometimes it is displaced sadness. Sometimes people come to funerals because they haven’t finished mourning their own.  Sometimes people don’t even know that they need to mourn until they cross the threshold of a grieving family’s home.

The last time I visited Benghazi before my grandmother died was in 2009. I told my mother I was never coming back. My grandmother’s house was not yet equipped with a television or an internet connection. I sent desperate Facebook messages to my friends in the States from a computer café where the privilege costed me five dinars an hour. But when we finally left, after a long two-month stay, I cried as I always did. As we said our goodbyes, my grandmother clutched my hands tightly in between her own weathered fingers and said, Come back. Tears dampened the wrinkles in the face. Come back.

I told her I would.

We weren’t in Benghazi when my grandmother died, in 2010, quietly in her bed. But my aunt Salma reports confidently that on the eve of her passing, she attended the wedding of a far-off relative, her first appearance at a social event in a very long time. There was noor in her face, my aunt tell us. A light. When my aunt found her the next day, the life had left her body as quietly as it had entered. Aunt Salma later sent a photo of herself over WhatsApp washing my grandmother’s body, performing the last burial rites.

How do we mourn in the diaspora? With ten boxes of Ritz crackers, four boxes of Medjool dates, seven kettles of Lipton tea, six pots of Arabic coffee, and four plates full of homemade bread. Lay these out on trays in your living room. The guests will arrive immediately. People walk through the door without knocking, bearing trays of food, of lunches and dinners your mother will be too aggrieved to make. They fill your home. You run out of chairs.

The responsibility of hospitality falls on the eldest daughter. New chairs must be summoned from the garage. Coats must be taken from the visitors. Tea cups must be topped off. Finger foods must be offered to each new grieving guest. The dishes must not be allowed to pile up. And still, you must accept fresh condolences as they come. One kiss on each cheek, one firm hug, and then a whispered prayer: Inna lilahi wa ilayhi raji’oon. To Him we belong and to Him we do return. A’tham Allah ajrakum. May God increase you reward.

Your reply will be perfunctory. Ajirna wa ajirkum a’la Allah. It rolls off the tongue swiftly.

Life passes in tandem. What happens there does not always happen here. Our grief is postponed. Mama could only find closure for her mother’s death a year later, when she went back to Libya, and collapsed in mourning at the threshold of her childhood home. Those who don’t go back are sometimes held captive by their grief forever, carrying their sadness everywhere they go.

Experiencing a death in the diaspora is like watching your life on a film reel. There are no bodies to bury. There are no belongings to pack away. There is no funeral tent. And even as guests come through the door, our self-made family in a self-made exile, there is a loneliness to the heartache.

They discovered the cancer in 2014. Umee Fathia, my father’s mother, suffered a stroke, triggered by a bomb blast at the next-door neighbor’s house. The diagnosis came like a death sentence. The hospitals in Libya are morgues. There is no infrastructure left for the living.

I have photos of Umee Fathia on my phone from our last trip to Benghazi, in 2012. The lens captured her image in perfect health. I had posted a photo on Instagram last year, for mother’s day. I took it at the airport, right before we were supposed to board a flight back to Los Angeles. Umee Fathia gazed distrustfully at the iPhone. Hers is a generation that only learned to embrace these new technologies after they sacrificed their progeny to the diaspora. Come back, she told me after we took the photo. Don’t leave.

Later, my cousin sent us a photo of her on the hospital bed. The covers swathed her frail body.

A phone call in the middle of the night is not always a harbinger of bad news. Sometimes it’s a misdial. Sometimes it’s a miscalculation of the time difference. Still, when it rings at 3 AM, you are shocked awake, and your mind can only react with panic. My mother again answered the call. My mother again gently roused me from my sleep, her body filling the frame of my door and her face again shining with sorrow.

Your grandmother passed away, she said, standing in the doorway. Your father’s mother is gone. Time shifts briefly to accommodate for decades of diasporic longing and

And then: We have to clean. The guests will arrive soon. 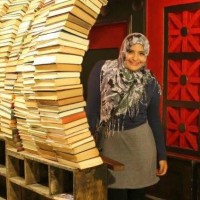 Tasbeeh Herwees is a freelance writer and producer in Los Angeles, CA.