This post is generously sponsored by A Friend of The Toast, who wishes to encourage others to donate as well.

Your father comes outside only to tell you that the orchard has closed. He finds you in the backyard, drifting through the pool on a half-deflated float and finally finishing Franny and Zooey. There is little else to do when you come home to visit your parents; it’s also probably time for you to return the waterlogged paperback to your friend, as she sent it to you in the mail two years ago. You have grown into the kind of person who waits an additional two years to read a decades-old novella.

So, despite the sun and the sweat and the skin peeling off your shoulders, you keep scanning pages. For a moment you consider going inside to read, but then you think that if you do you’ll have to dry off and shower and dry off again, and then you’ll have to comb your hair and get dressed and check Facebook and maybe go to the kitchen for a snack. Inevitably, you’ll forget why you came inside in the first place, because you have grown into the kind of person who struggles with purpose.

You decide to stay outside staring at Franny and Zooey, until your father calls your name. He stands in the doorway to the breakfast room and announces that there will be no strawberry picking this year. Someone has bought the orchard, where you’ve gone as a family every year to collect your fresh fruit and your memories.

You and the peach trees grew up together, but now someone has plans to chop them down and cover their stumps with asphalt. Their graves will be marked with nothing more than the neat lines of a parking lot.

The orchard closed three months ago, but the owners just posted a memo on their website addressed to their loyal customers — the people who had come to the fields season after season, year after year. Your father reads the letter aloud to you from his phone. It thanks patrons for praying often, visiting faithfully, and sending in photos of their children posing in red wagons as they wove through the orchard rows. Some of those photos are included at the end of the note, your father says. Yours is one of them.

He scrolls down on the phone’s screen and holds it up for you to see. The picture of you and your sister picking strawberries in 1996 stares at you from the bottom of the orchard’s webpage. It’s the same photograph that your father displays in his office and in the study at home, where it hangs surrounded by replica shots taken years later. Every photograph shows you and your sister standing next to each other in the strawberry patch, the fruits of labor and longing pinched between your fingers.

You are almost five years old in the original picture, your sister almost three, and each of you holds a ripe, red fruit in your hand. You dangle yours up in the air, almost above the upper-reaches of frizz coming off your thick golden blonde ringlets, and with authority you reach your other hand across your sister’s shoulders and pull her toward you. Both of you wear high-waist denim shorts and a smile signifying laughter, probably in response to something silly your father said. Most likely he shouted smile, buttheads!, but he might’ve made a different quip that you found hysterical at the time. You and your sister scrunch your noses and squint your eyes as you bare your baby teeth. Your smiles are the sunshine otherwise missing from an overcast day.

Without warning your father hits a button and the webpage evaporates, only to be replaced by a different version of the image. Now little icons surround it, app buttons that obscure your sunny smile. The strawberry picture is the background on your father’s phone. He waits by the edge of the pool for your response to the news, but instead of consolation you offer your father an acerbic statement. That sucks, you say, and then you go back to reading your book.

But as soon as your father turns around and goes back inside, you get that clump of feelings in your throat that seems like a solid mass blocking your windpipe, the kind that only teardrops can loosen. The heat in the yard now seems overwhelming and you need to go back inside.

You get out of the pool and place Franny and Zooey on a patio chair, then wrap yourself in a monogrammed beach towel that bears an incorrect spelling of your sister’s name. It used to be thick and absorbent and oversized, but now it is gauzy and perforated and only goes down to the middle of your thigh. At some point you started to stand one foot taller than you were when you got the towel, but you can’t remember growing past the graphite notches that creep up a doorframe in the house.

Chlorinated droplets dribble down your legs and sting your open mosquito bites, but you go inside anyway to have a good cry alone, under the covers, in the dark. You shut the door to your childhood bedroom and realize that your skin is still too damp to lie in bed. So, instead of having a catharsis, you decide to inspect your nose for blackheads you can pop.

The full-length mirror on the back of the door remains stained with mascara and dry-erase marker and the cleaning solution your mother used to remove them, along with a silver Sharpie-scrawled sign of her thwarted efforts: A directive to smile! in the big, bubbly capital letters of your high school handwriting. You go over to the three smaller mirrors that hang in a vertical line instead, and stand once more in front of the small glass table where you would painstakingly flat-iron your hair every day of eighth grade.

The room is still painted the ebullient hot pink you selected the summer you turned thirteen, but the photos you pinned to the walls in high school no longer mask the regretted color choice. You took some of the old Polaroids down to adorn your freshman dormitory, but most of the snapshots now contain a film of dust they gathered in the shoebox where you left them.

When you look in the mirror, you see a person who resembles vaguely the girl in the buried photos. Your heart gets stuck mid-beat for just a second while you stare at your reflection: An adult stares back at you from the mirror in its rounded pewter frame. She looks startlingly like your mother, but she isn’t as tall.  Her hair is the same golden blonde and her irises the same olive drab, dotted with the same mysterious freckle just below her right pupil; her face, the same long oval outlined by the same well-defined jaw. She has darker eyebrows than your mother does, but they have the same wiry texture. They arch over eyes shaped exactly like your father’s. They start to get wet with tears just as your body finally dries, and so you turn away from the mirror.

You sit at your desk and try not to be melodramatic, but — unable to help yourself — you decide to pen an elegy to the orchard. The last time you were there, one year before, you had no idea it would be your final visit. You didn’t even get to pick strawberries. You drove to there with your best friend from college, along with your sister and her boyfriend. Your parents stayed home because you weren’t almost five and your sister wasn’t almost three, and it wasn’t 1996 anymore.

You both still dressed in high-waist denim shorts but wore different expressions on your faces. Your father didn’t crouch on the ground and count to three and implore you to say cheese, and your arms didn’t encircle a toddler with curly hair and chubby cheeks. The orthodontically perfected smile you flashed for the camera didn’t signify laughter; you offered it in jest, knowing that this would not be a photo of two little girls.

You did not get another portrait of your childhood in the orchard. Instead, you got a grainy cell phone snapshot of two young women standing in a fruitless patch of weeds.  You laughed at how poorly the shot resembled the original, how many details seemed to be missing. Without strawberries, your sister was the only thing you had to hold onto.

One of you emailed the photo to your parents, who would be empty nesters in a matter of weeks, and divorced just a few years later — but you couldn’t know the second part then. Things were still easy, though not as easy as they’d been. Your mother and father both responded with emoticons and embarrassing text abbreviations that betrayed their age; they had gotten older, but so had you. Neither of them ever framed that last photo of you in the orchard.

Now you pull the image up on your computer and there you are, posing by a lane of strawberry plants, framed on the screen instead of a wall in the other room. Moments after the last picture was taken, you had piled your long wavy hair into a ball-of-yarn bun on top of your head, but in the photo it drapes over your shoulders like a hand-knitted blanket, thicker than the humid gulf coast air. You smile and sweat in the early summer heat as your cheeks redden with hints of a sunburn.

A bright cloudless sky seems to light you from all sides, and it causes you to squint in the final shot. When the image shows up on your screen it is out of focus, fuzzy and at a low resolution. In the center of the frame, you can see a woman with her deep-set hazel eyes half-open, just one year younger than the adult you saw in the mirror. She appears one lifetime older than the little girl in the original. Somehow, the faces are the same. 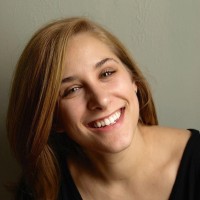 Jenny Kutner is a writer for Salon and for hire. She is originally from Texas.