Widowmaker: My Father’s Dance with Death

The TV is too loud because he’s hard of hearing, and he leans forward so he doesn’t miss a word, his eyes hungry, unblinking. The motorcycle sport documentary On Any Sunday plays on the screen, and though my dad has probably seen it a dozen times, his fascination will never fade.  He’s watching the part about the famous Widowmaker hill climb– the 1,000-foot-tall mountain slope in Utah that only twenty riders out of thousands have succssfully climbed in the last dozen years. “I could have done that,” he tells me.

My dad always loved flirting with death. In the swamps near my house, he and his friends had their own “Widowmaker.” The hill was so steep that stupidity and fearlessness were the only reasons they continued flipping their bikes attempting to climb it. But my dad could do it. When the others couldn’t, they’d ask my dad to climb on their bikes, just to see if it was possible. He was the envy of every rider who ever came to the swamp in south Mississippi for the hills or enduro races. They called him “The Hill Climber.”

There was something about machinery that always drew him, an attraction to the strongest, the fastest, the most powerful. My grandmother secretly cosigned for my dad to buy his first dirt bike when he was 11-years-old. My grandfather refused to help him buy one, because he’d wrecked a motorcycle himself when he was young and vowed he wouldn’t put his son in that kind of danger. My dad paid $8 a month for eighteen months with the money he earned picking okra for twenty cents per pound and tung nuts for twenty-five cents per pair of five-gallon buckets. He snuck to the swamp on his bike every day. When my grandfather finally went to the swamp and caught him, he was furious, but secretly proud to see his talent. My dad had become a local celebrity.

He’s owned eighteen bikes since then, and probably ridden more than one hundred. At sixteen, years before he got his commercial license, he started driving 18-wheelers. He got a job operating heavy machinery right out of high school and bought his first 18-wheeler when he was twenty-two. He dreamed of being a fighter pilot, but instead, he spent the next twenty years in a truck cab, hauling chickens, sheet rock, produce, or hazardous waste to all but a handful of the continental United States, with only his CB radio for company. His radio code name was Hill Climber.

He would be gone for a week at a time and then get to come home for a day. I’d run into the yard with my mom and sister when he’d turn into our driveway, honking the horn in celebration until he parked. He’d leave the truck running when he got out, picking me and my sister up in hugs. Then he’d bring us back to the truck with him where he’d always let me drive. I’d perch on the edge of his knees and still strain to see over the dash as he let me steer through the back roads surrounding my house. I’d make sure his hands weren’t on the wheel so that he wasn’t only tricking me into believing I was steering. Most of the time, they weren’t.

He’d go days without sleep, trying to get his loads across the country on time, ignoring exhaustion and weather conditions. He was in the middle of the badlands of Colorado once when he thought he saw one of his back tires flat in the side mirror. When he stopped and got out to check, the wind blew the door closed, locking him out in the eighteen-degree weather, with only a long-sleeved t-shirt to protect him against the 38-mile-per-hour sustained winds. It was 3:00 AM, and he was forty miles from the nearest town. He was too cold to speak when a truck finally drove up and stopped nearly four hours later.

My dad quit driving full time in the early 90s when he could no longer stand to be away from my mom, sister, and me, and he found a job as a mechanic for 18-wheelers and heavy machinery. He wasn’t just good with his hands– he was a magician. No college degree could have made him a more qualified expert.

He drew up plans and started building a house in our front yard so that we could move out of our trailer. He’d get home from work at 6:00 or 7:00, eat dinner, then go out to the house. My mom would hear the saws and hammers until 1:00 or 2:00 in the morning, and then he’d leave for work again at 5:00. He built most of our house with his bare hands and finished it in less than a year.

When I was in middle school, he started working as a boiler technician, traveling around the south fixing hot water systems in schools, hospitals, and businesses– a dangerous job made even more dangerous by the fact that he often had to crawl into the tiny spaces where none of his coworkers could fit.

He was working on a boiler several years ago when a pipe came unscrewed and started spewing boiling water and steam. Instead of running for safety, he ran into the spouting water to turn the valve off so that his hours of work wouldn’t have been in vain. The second-degree burns it left him with didn’t leave as many scars as he thought they would.

He could have been a comedian, could have been a storyteller, could have been a writer.  “Put him on a stage, and I swear he’ll make money,” my mom’s always said. Instead he’s earned his money by taunting death. Underneath machines that could crush him, trying to keep control of his truck when the brakes wouldn’t hold while speeding down ice-covered mountains, and in the flooded basement of the New Orleans hospitals after Hurricane Katrina, relying on the centimeter of rubber boot between him and the water to protect him from E. Coli. His body is comprised of four decades of manual labor. He constantly has to go to the eye doctor to get stray slivers of steel removed from his eyes. The skin on his arms is littered with scrapes and scabs, and the creases in his hands are permanently stained black. But his compact frame could be the body of someone half his age, and his thick brown hair has hardly a strand of gray.

He arrived home after work one day in my last year of high school and grabbed me too hard, holding on too long, and I stopped protesting when I realized he was crying. The wreck he’d passed on his way home had been between an 18-wheeler and a silver Saturn Ion identical to mine. He’d stopped on the side of the road and run to the police, passing CDs strewn across the street from the crushed car before it was peeled off the road. It was two girls, the cops told him– It was me bringing my best friend home after school, he imagined, until a bystander pointed to two girls on the side of the road and said, “There they are.”  He imagined me in that car for days, couldn’t make himself unsee it. He believed in his own immortality, not mine.

I’m a nervous passenger– always begging him to back off of the car in front of us, to slow down in the rain, always setting off his temper. Once he started riding street bikes, he got two tickets for riding without a helmet before he finally bought one. He’s never intentionally reckless, he just knows that behind a wheel or handle bars, nothing can happen to him. When he finally came face-to-face with death, it was because his own body betrayed him.

I was four hours away when my mom called to tell me he’d had a heart attack. I drove as fast as I could in the dark and ice while the Emergency Room team tried to bring him back to life. During the half-hour of CPR he flat lined multiple times, and it took a dozen shocks with the defibrillator to restart his heart “He probably won’t survive the ambulance ride to the hospital that can help him,” the doctor explained to my mom, “but he definitely won’t if we don’t try.”  We sped toward each other on the interstate– me praying my way over ice-covered bridges heading south, he in the back of the ambulance going north with a hand-pumped ventilator feeding him oxygen.

I arrived at the hospital, in time for the cardiologist to tell us that he’d put three stents in his heart, and that our main worry now was that my dad had gone too long without oxygen. Brain damage is likely to begin after three minutes without oxygen. After ten minutes, so many brain cells have died that the patient is unlikely to recover, and after fifteen minutes, recovery is virtually impossible. My dad had gone without oxygen for at least half an hour, the doctor said. He would probably never come out of this coma.

My mom, sister, and I ignored the ICU visitation rules and took turns sitting with him and talking to him. I read him Michael Ondaatje’s novel Coming Through Slaughter and ignored the nurses’ glances. One of the ICU nurses told us, “I knew I recognized him as soon as I walked in the room this morning.”  He’d visited cousins near my house when he was young and had seen my dad ride in the swamp. “He did things on a motorcycle that shouldn’t have been possible,” he said.  “I’ve seen him cheat death before.  He can do it again.”

It took three more days in the ICU for my dad to wake up and prove the doctor wrong. A month and a half later, my mom, who had taken leave from work to care for him, heard a motor start in the yard and ran to the front porch to see him driving away on his motorcycle. She stood furious, and secretly proud. Around 5% of people survive a heart attack that completely blocks the left main coronary artery, what doctors call a “Widowmaker” heart attack. My dad recovered, with inexplicably worse hearing and the lesson it took him over half a century to learn– that he can’t keep cheating forever. 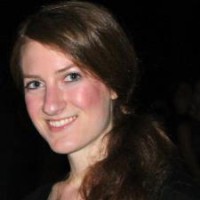 Kayla Smith is a graduate of Columbia University’s MFA Program in Nonfiction Writing. She’s originally from South Mississippi. You can follow her on Twitter at @KaylaMSmith89.