Exposure: On Raising a Bilingual Child

When he goes to her in the morning, I listen for the words I know: buenos dias, ojo, pelo, bébé. The morning words will be simple ones. Nouns.

I can remember most numbers, too, when we sit on the floor and count blocks. I often forget siete, so I start over, hoping it will come back the next time around.

“The way you go about helping your child become bilingual isn’t that much different from the way you’d go about helping him become, say, a highly skilled swimmer or piano player: You provide him with lots of instruction and opportunity to practice…” —Seven Steps to Raising a Bilingual Child, Naomi Steiner

We, but I really mean he, decided to raise our daughter bilingually when she was the size of a pea, Spanish being a decade-old hobby for him. CDs on long work drives, language school in Guatemala and a weekly Skype class with a teacher he’d met there. He taught ESL on Sunday afternoons to a mostly Spanish-speaking class. He had a natural gift. Everyone said so.

I’m at a turning point he mulled a couple weeks into the pregnancy. Either I commit to this and make it part of our lives or it becomes an old hobby.

Do it, I said between Saltine crackers. If you can give her a head start with a language, let’s do it.

I was flippant, distracted. He was focused, driven—research on brain development and cognitive function, how-to books and lengthy discussions with friends. I slept and slept and slept.

At night, he watched Spanish versions of Survivor and a soap opera called Devious Maids—sometimes without headphones so she could hear, in utero, native speakers.  Every now and then I rolled over and attempted to catch the story lines, especially the soap opera. He would explain about the murder and the affair and the secret father. But mostly, all those Spanish words were a lullaby rolling me along, bobbing and big-bellied.

The first hardest part, he’d say when I was awake, will be speaking Spanish when everyone else is speaking English. The second hardest part will be talking to her about deeper things—sadness or love or sex. I think you have a while before that, I told him. She’ll need to learn her body parts, first.

“I can confidently say that any person on earth can learn a second language, no matter what their age, intelligence, working or living situation is…. When our mentality, motivation, passion, and attitude are kept strong, we have the momentum required to charge on toward language fluency.” —Fluent in the Three Months, Benny Lewis

When are you going to learn, he asks me in the ninth month of my pregnancy. You’ll have to learn. A year, I say. But I’m not sure about the year. I’m not sure about ever. I tried a class once, but all my college French words welled up first and I had to walk through them like tall grass and it made me tired. I am already so tired. But I download the language app along with the one that will track my contractions when the time comes.

“The extent of a bilingual child’s disparity in fluency depends on that child’s unique bilingual environment, which is comprised of the languages spoken by his parents, the languages of his extended family and culture, the language of his community…” —Seven Steps to Raising a Bilingual Child, Naomi Steiner

She finally comes, this baby. Though it takes two sunsets and a sunrise before it really happens, before she’s swaddled and weighed and bathed. I fall asleep and wake up and fall asleep and wake up. That second time, Spanish words like a July rain—soft, familiar—are in the air. My nurse is Colombian and they are talking over me, my husband and she chatting about school and visas. Life, it seems, goes on and on while I’m here in this bed, stitched up and hungry. The baby’s nursery bassinet sign is markered with Felicitaciones! and Me llama Nola! Already he is whispering to her in Spanish.

“There is absolutely no reason to believe in a ‘language gene,’ as if the ability to learn a foreign language is encoded in your genome at conception.” —Fluent in the Three Months, Benny Lewis

When I first heard “esperanza,” the Spanish word for my name, “hope,” it sounded like razors—all esse and pppa and zzz. It felt heartier, stronger, than the English equivalent with only a soft pppa at the end to see it through.

I wanted to name our daughter Nola Grace, give her a noun name. Like mine.  But in Spanish, it would sound like no la gracias, “no grace.”

We argued. When she travels in a Spanish-speaking country, it’ll be weird, he claimed. My arguments embarrassed me even as I made them. She’s American. She’ll live here. Her native language is English.

I gave in on the condition that I get to pick the replacement middle name. I named her after my North Carolinian grandmother.

“One-parent-one-language, or, OPOL…. One parent speaks one language to the child and the other parent speaks another—always.” —Seven Steps to Raising a Bilingual Child, Naomi Steiner

They take Spanish walking tours through the house. He tells her about the kitchen and the living room and our dog. Sometimes I think I should follow him, learn from the ground up, just like she is.

I realize I don’t walk her through the house and say these things in English. I start to, though it feels forced and silly. I soon switch to Jack Gilbert poems and board books.

When she wakes up inconsolable in the night, he takes her to the window and describes the whole world in Spanish. She calms, finds her thumb. I listen and wonder if these words are sinking in me somewhere, too.

“Exposure to human beings who speak your target language is what’s it’s all about. It’s time with real people and real exposure to the language through TV, radio and movies that pushes you forward.” —Fluent in the Three Months, Benny Lewis

We begin interviewing Spanish-speaking nannies. The first, a young woman with two sons. She and her husband come to dinner, friends of friends. Turns out they are 21 and live with his mother. The second is a woman whose own two young children live in Mexico with her mother. The third, a shy woman who doesn’t say much, trips up the stairs when I take her to Nola’s room and speaks very little English. I follow my gut, a strange language-less thing. This is the woman we ending up hiring. It will be one of the best decisions we’ve ever made.

“The farther you can extend the language boundary at home, the more your kids will benefit.” —Seven Steps to Raising a Bilingual Child, Naomi Steiner

He subscribes to Netflix and HuluPlus in hopes of accessing Spanish kids programs. Scratchy Spanish versions of Dora can be found on YouTube (as well as other weird versions of Dora). We buy overpriced DVDs and Blues Clues dubbed in Spanish. I get a crush on Steve who is not bilingual either.

Twice a month at the library I pick up three English storybooks and two Spanish ones. By now, I can at least read the Spanish ones out loud even if I don’t know exactly what the words means. I’ve always been good with mimicry.

He’s consistent, my husband. At home, at friend’s houses, in restaurants, he’s only Spanish. I’ve almost stopped registering it as a language different from the one I speak to her. But others do. Sometimes I catch them staring and then I remember.

At the airport once someone official asked if anyone spoke Spanish. A woman stood beside the official, wild-eyed and bewildered. We stepped up. I imagined this is what doctor’s partners felt like in times of crisis. A little proud. A little annoyed because of the delay since you’re the one holding the thrashing toddler. I watched the woman’s eyes as my husband talked with her, the way they softened with relief and lost the fear. And I wondered why I’m dragging my feet. It’s such a simple act, really, to learn another language.

“Speaking the language out loud with a real human being… every single day is the best way to zoom forward toward a conversational language level and on toward fluency.” —Fluent in the Three Months, Benny Lewis

I Spanglish mostly: English with a few Spanish nouns thrown in. That’s what Nola does, too. At two years old, she speaks in mostly nouns anyway—sometimes English, sometimes Spanish. But whatever is Spanish is always Spanish. Like agua or cama or allá.

I can roll my “r’s” almost well. And I can repeat the phrases I hear him say perfectly: “Dónde está el mono? And there is a charming habit of adding “ita” to “little things” in Spanish. Our daughter becomes “Nolita” and I think, for the first time, that maybe this language is more beautiful than French. Maybe. And maybe, I really do want to learn it.

“Develop your family’s bilingual goals and Bilingual Action Plan with your partner regardless of whether he speaks your language.” —Seven Steps to Raising a Bilingual Child, Naomi Steiner

I hate that Siri is in Spanish on his phone. When I use it, I can’t look up directions or navigate the web well. And texting takes forever. Because auto correct in Spanish. I also hate the Spanish nursery rhymes CD—the singer’s voice pitch, the too-loud accordion.

At the end of the day, I just want to read my book, in English, and not feel guilty for not studying Spanish. I want—when the babysitter tells me in the Spanglishy way we communicate how long our daughter slept, what she ate and if she pooped—to be able to ask questions about said sleep, food and poop and understand the answers.

“You live a new life for every new language you speak. If you know only one language, you only live once.” [Czech proverb] –Fluent in the Three Months, Benny Lewis

I buy a book of poems by a Nicaraguan poet. The left page is in Spanish with English on the right. I’m hoping the experience of reading it in both languages will help me fall in love with Spanish, to find my footing in this arranged marriage I am in.

It takes me two months to finish the book because I make myself read the right page and then the left, to hear the poems in two languages.

Sometimes, I come to understand, love is hindsight. And sometimes, you are already too far in to ever leave unchanged. 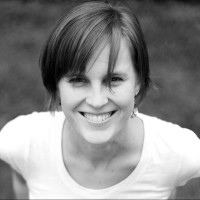