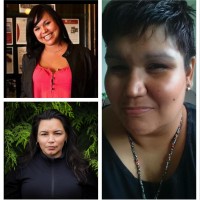 Colleen Hele - Cardinal, nêhiyaw-iskwêw - Amiskwacīwiyiniwak is an adoptee of the Sixties scoop and the daughter of a residential school survivor who organizes with Families of Sisters in Spirit (FSIS) and speaks publicly about murdered and missing Indigenous women, drawing connections between genocidal colonial policies and the lived experiences of the women in her family. Naomi Sayers is an Anishnaabe Kwe, indigenous feminist, and sex work activist with experience working in the sex trade in various places in Canada, including northern Ontario. As VP-women's representative for the Aboriginal People's Commission for the Liberal Party of Canada from 2012-2014, Naomi drafted a policy resolution calling for the party's support on MMIW actions; this policy passed unanimously at the party's last convention. She writes at kwetoday.com and is currently studying law at the University of Ottawa. Jessica Wood is Gitxan / Tsimshian from Northern BC. A queer-identified artist, activist, researcher, and community planner, Jessica has been working on issues related to violence against Indigenous women and girls for over fifteen years.