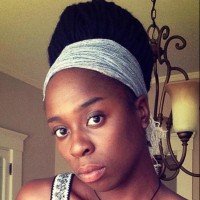 Maria Pinto was once called a dark horse by someone she trusts to judge that sort of thing, and thinks the phrase is just as pretty as "cellar door." Her recent work has appeared or will appear in Bartleby Snopes, The Missing Slate, Literary Orphans, 100 Word Story, and elsewhere. She was an Ivan Gold Fellow at The Writers' Room of Boston, in the city where she lives. Her debut novel is in search of a home. She is working on her second.