The Plight of the Small Business Owner

If there was one thing I envied about Laura Ingalls Wilder (besides the fact that making molasses candy in the snow was something I was never going to experience as an elementary schooler in Honolulu, Hawaii), it was that she had such keen survival skills. Waking up at the crack of dawn and sleeping on straw weren’t exactly my cup of tea, but that girl could churn butter and fashion her own dolls and understood how to store meat for the winter. To someone who struggled through late night English homework and handwriting exercises, the idea of running away and knowing how to fend for oneself was liberating.

Though there are certainly rural parts of Oahu, life in Honolulu mimicked that of any moderately-sized city. The closest I got to having crops was growing a lima bean plant for class, a responsibility I quickly forgot about once the assignment was over, killing it off before getting to taste the fruit of my labor. Still, even before getting to double digits in age, I dreamed about being more independent. My parents would have to pry me out of the Power Wheels Barbie Cars at Toys R Us, because, even though they were chained to the displays, I would imagine myself taking off down the freeway, running errands for my parents or leaving home when the bedroom I shared with my two younger sisters felt too crowded.

While I accepted the fact that I was not cut out for the country life, I quickly latched onto another concept that could lead to self-sufficiency: money. I received a small allowance ranging from $1 a week to eventually $5 closer to my graduation from elementary school, which meant independence came less in the form of paying my own room and board and more in being able to afford a new comic book or block of clay from the art supply store on my own. Even those items, however, took patience to save up for, a quality that I was almost always in short supply of. Birthday and Christmas money was almost always put into some mysterious “college fund” or whatever, so I always felt like, if I really wanted to start amassing a fortune to be able to afford luxuries like a bulk box of Fruit by the Foot from Costco or clothes for an American Girl doll, I would have to take matters into my own hands.

Our house was on a hill and did not really have a sidewalk, so simple dreams of a lemonade stand were not an option. I did what I could, though: I attempted selling homemade books (complete with yarn-tied-three-hole-punch binding), laminated dried flower book marks (that was really just smashing weeds from our yard onto a strip of paper and putting packing tape over it), jars filled with water and ferns (an exercise which I still, to this day, am trying to figure out where I got that idea from), and pencil grips for a school market project that just consisted of tin foil that had been wrapped around a pencil– no one bought it, go figure. I even once tried to construct a rudimentary vending machine a la Caine’s Arcade to take the few quarters my little sister might be able to spare.

My most steady patron was always my mother, who eventually commissioned me to make homemade gift tags for her. Holidays, of course, were the most busy season, though I also exercised my marketing skills by coming out with a hand-drawn catalog once when business was slow. All of the gift tags involved a hand-drawn present template, which I would outline and then color myself. I only charged about $0.50/tag, which, upon reflection, would’ve gotten me eaten alive on Shark Tank, as I was only making about $2/hour and those Gelly Roll pens I was using were not cheap.

Once in a while, I found opportunities to expand my customer base. When my family was preparing to move from Hawaii to Georgia, we got a booth at the swap meet to sell off some stuff from storage, and a friend and I made a basket full of scrunchies to add to our wares. We only sold one, but it received rave reviews when the woman who purchased it declared enthusiastically that it wrapped exactly twice around her hair, the biggest compliment a scrunchie can receive.

I experienced many of the trials and tribulations of any entrepreneur. I had very little startup capital to work with– working materials were pretty much limited to things laying around and near the house. I also was notoriously impatient when it came to acquiring new skills, often losing interest if I couldn’t pick them up right away. Many a knitting attempt has been left in uneven patches and artwork sloppily finished in frustration. Then there was just the difficulty of managing the funds. Sometimes having a pocket full of change made me feel almost too confident. I lost a devastating $10 or so once in a game of blackjack against my dad, a moment of hubris that taught me the evil underbelly of gambling at a young age.

Even when business was good, I learned that money could not surmount any problem. One year, my uncle and aunt visited from California, and I thought I would be able to treat them to a lunch of $1 Whoppers. I could even afford to throw in some fries and a couple of drinks! When they revealed that they weren’t interested in eating at Burger King on their Hawaii vacation, I threw an epic tantrum, tears and snot running down my face and sobbing so hard that I couldn’t form words. In a matter of minutes, my attempt at a very adult gesture had dissolved into the definition of childishness. The very thing that made me feel so big also had the capability to make me feel so small. This, too, was a hard lesson learned at an early age.

Currently supporting myself with both a full time and a part time job, in addition to some freelance gigs, I benefit from having learned the art of the hustle long ago, selling origami birds out of cardboard playhouses or pulling weeds from our downstairs neighbor’s yard. While I am hardly building log cabins or sewing my own clothes, I manage to keep myself sheltered, fed, and generally content. And when I have a little extra, I indulge sometimes in the little luxuries–dinner with a friend, a movie or new book, or even a bulk box of Fruit by the Foot–and I can smile knowing that I got it myself. 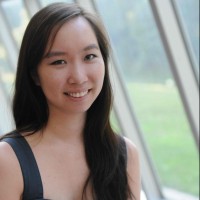 Kimberly Lew is the proud writer of plays, blogs, and the monthly rent check when it is due.