We were sitting on the porch of Dead Rat Beach, having some terribly important discussion about fake punks versus real punks, when I said:

“You know who K is like? That whiny prick Neil from Real World Four. ‘There’s not enough intellectual stimulation in this house.’” I rolled my eyes.

So I explained: “Neil was this pseudo-intellectual pissy fuck who got a bottle of peroxide and thought it made him punk.” Off the porch, behind the telephone wires and tree branches, electric pink stripes of sunset shot across the West Oakland sky. “But the weird thing was, he had this super rad girlfriend. For Valentine’s Day, she got him a cow’s heart with nails through it. And he freaked out.”

A light, a little bit of the sunset, flashed through Alex’s eyes. “She got him a cow’s heart?” I nodded. “With nails in it?” I nodded again.

“Yeah, it was bad-ass. And he totally couldn’t handle it.”

Alex looked out at the sky, damn near majestic as the dogs barked and the shopping carts rattled, an evening still settling over the street. “That’s the coolest thing a girl’s ever gotten a guy.”

So, you know, the plan was set.

Poor Alex had been raised in one of those liberal, North Berkeley Tibetan-prayer-flags-and-Noam-Chomsky households that disallowed everything: no violent images; no playing with guns; no overexposure to corporate branding; no Disney; no processed sugar; no pornography; no more than one carefully monitored half-hour of television per day on pre-approved channels of PBS, Discovery or public access.

So he was constantly missing my references to foundational cultural pillars such as Divorce Court, Tales from the Crypt, My So-Called Life, Montel Williams, 90210 and of course, Real World. My parents were Marxist-Leninist revolutionaries whose overarching approach to child-rearing had been: take the filters off everything and let the kids figure it out for themselves. Open discussions about adults’ sex lives; booze-lubricated political debates; stoner babysitters; mentally unstable drug-dealing neighbors; copious profanity; and unfettered access to a premium cable package were the cornerstones of my childhood. By the mid-aughts, this overexposure had led me to an early-twenties lifestyle of middle-class strivings muddled by punk overtures. Or maybe it was the other way around.

Alex’s childhood insulation against, well, everything probably had something to do with why he opted to move into one of the most notorious punk houses in West Oakland. Eleven people lived in a five-bedroom Victorian, catty-corner from a hobo encampment and a recycling center. There were broken windows, holes in walls and a pentagram on the kitchen floor that was sometimes lit on fire. Stray neighborhood dogs roamed through the house and a junkie lived in the crawlspace under the front-porch stairs. Sometimes at night, when the rats got squeaking too loud, Alex would sit up in bed and hiss like a cat to make them stop.

While the romanticization of urban poverty wasn’t something Alex and I shared, at the end of the day our childhoods had instilled values more similar than different: a propensity towards thriftiness (a date was a burrito in the park); a love of getting-over (hopping BART and working under-the-table); and a hatred for all consumerist cultural mandates (Christmas, Mother’s Day, Valentine’s Day).

Valentine’s Day in particular seemed to elicit Alex’s ire—a corporate construction designed for gold-digging women to suck money and gifts out of sorry-sap boyfriends. It was stupid, we both agreed. Buying gifts was a waste of money, and expressing affection was for the needy and weak.

Except, how could you argue with an impaled raw animal heart?

The first question was where to find a cow’s heart. A vegan at the time, I wasn’t in the habit of seeking out strange animal parts. My best friend, a taxidermist, was. “Chinatown,” she told me. “We gotta go to Chinatown.”

We drove down to Oakland’s Chinatown, traversed the double parkers, and pushed past the throngs of old ladies and teenagers drinking bubble tea. We entered a dimly lit meat shop where we waited for several minutes, trying to discern the line.

Realizing there was none, we elbowed to the front counter. “Do you have a cow’s heart?” Alicia asked the butcher.

The old man gave us a LOOK.

“Cow,” Alicia repeated. “Mooooo.” Then she pointed to her chest, made a thump-thump motion. “Heart.” (Oh, my God, ALICIA, like a butcher in Chinatown doesn’t know “cow”! – Ed.)

The butcher frowned. “You want a cow heart?”

He sighed and his elbows disappeared inside a massive freezer. When he raised his arms, a frozen red block as big as my head slammed onto the counter.

Alicia and I looked at each other. “Uh, sorry,” I said. “It’s kinda big. You have anything smaller. Like,” I raised my fist, “like this?”

“Hmmph,” the butcher nodded. He rooted around in the freezer again and this time retrieved something much smaller, indeed the size of my fist. “Pig heart,” he told us.

He wrapped it in newspaper and shooed us away. The rest was easy: I bought a cheesy heart-shaped box from Walgreens, and got some nails and rose petals. I let the heart defrost, drove the nails through it, laid it in the box and arranged the petals around it.

Blood started seeping through the box and onto my floorboard as I drove the gift over to Alex’s new apartment. He’d moved out of Dead Rat Beach the month before—winter had come, the winds blowing through the broken windows, and I guess that’s when you could say the glamour of living in a West Oakland flophouse had worn off.

“Happy Valentine’s,” I said to Alex when I walked in his new flat.

He snorted. “Yeah, Valentine’s.” He didn’t bother to look up.

“Hey remember that thing I told you about that MTV show, the fake punk with the cool girlfriend?”

I took the box out from behind my back and handed it to him.

He gave me a suspicious look as he reached for the box: heavy, lumpy, the cardboard soggy. He looked down at it, then back at me.

There’s this moment when you give a really good gift—when you see this flash in someone’s eyes; when you watch them raise their hand to their mouth; when they look at the gift and then at you and then back to the gift again; when something like disbelief spreads across their face and blooms into an honest-to-God shit-eating smile—this moment when you think those hokey old adages are true, that maybe it really is better to give than receive.

Alex held the box in his hands as he did a little hop, walked over to the window then back again. He put the box on the counter, stared at the heart, poked it with his finger and shivered.

“That’s like, that’s by far, that’s…” He came over and put his arms around me. “That’s the coolest present I’ve ever gotten.” And then he kissed me.

He called his roommate into the kitchen, who similarly oohed and ahhed over the heart. It was agreed that, while Valentine’s was bullshit and MTV was the epitome of corporate evil, driving a stake through the heart of an animal procured in Chinatown was clearly the best way to make something punk out of an unpunk situation.

Alex took pictures of the heart, which he later made his Myspace profile picture. He showed everyone who came over and they all agreed: best Valentine’s gift ever.

He kept the heart on the counter for days, and slowly it started to decompose. A rot stench rose from it, a little puddle of deep red pooling around it on the kitchen counter. I didn’t want to ask him to get rid of it—it’d been my gift after all, and it’d made him so happy. But by the next weekend, The Greatest Valentine’s Gift Ever had been reduced to a mucky blob of putrid purple, and not even Alex could take it anymore.

The debate over what to do with the decomposing pig’s heart was a fierce one. Clearly, you couldn’t throw out it, and it was beyond the point of cooking. The idea of preserving it in a jar was floated out, until my taxidermist friend nixed it: “It’s too far gone.”

At last it was decided that regifting the heart was really the best way to honor it. So Alex and his roommate drove to Dead Rat Beach in the middle of the night; stormed in through the unlocked door and clammered up the steps; took one of the nails and pounded the pig’s heart to their friend Jason’s door; then ran back down the stairs, jumped into the car and drove off.

The noise woke Jason and when he opened the door, he saw the half-rotten pig’s heart sliding down his door, and screamed.

It turned out the boys had pulled the stunt when Jason was in the middle of a breakdown, and that having a pig’s heart mysteriously nailed to his door didn’t help his mental state any.

So the next day we all piled back in Alex’s car and drove down to Dead Rat Beach, brought Jason some dumpstered vegan cookies and tried to explain the story—that it’d all been done out of love, out of anti-consumerism, out of punk rock and pop culture and the search for the place where those things intersected, where we intersected, and made something repulsively beautiful.

In the original Real World episode, Neil sits next to his girlfriend Chris, seriously perturbed as she keeps laughing about the gift. “You didn’t see the humor?” she asks him.

And we asked Jason the same thing, wide-eyed and semi-consolable, wrapped in blankets to buffer against the winter wind that kept rushing in through the broken window.

Eventually, I think he did. 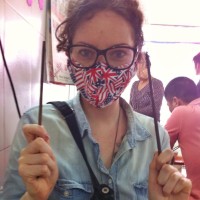 Lauren Quinn is a writer, kindergarten teacher and contributing editor for Vela. She will always be an Oakland girl at heart.