The Gossip Columns of H.P. Lovecraft

There are some stories we wish to tell and some we are compelled to, even if we fear the telling may drive all who hear it to madness and cruel death at the fates of some beast greater than man could ever comprehend. This horrifying account belongs to the dreaded latter. It concerns a mysterious occurrence, a terrible fate, and sheer horror. It is only after much discussion and consultation with eminent professionals that I dare to pen this tale, so baffling and strange its maddening details are.

This concerns an actress, one born of an old Hollywood family noted for both their staggering talents and magnificent acts of self destruction. The actress, unfortunately, inherited both traits in equal measure. After a childhood of successes, she navigated an adolescence of career and personal shortcomings, until she was able to finally able to succeed both in front of and behind the camera.

A recent movie found her acting on location in a rather remote section of Alaska. Without much to do in terms of local amusement, she and the director, an adaptive man who started out making videos before developing a reputation for inventive filmmaking, began to rekindle a decades old flirtation, even going as far to take a day off filming to go snowmobiling, just the two of them.

But beware those places man does not understand! For, as the B+/A-director related to me, in a panicked and concerned fashion, things quickly became harrowing after an hour of riding in that frozen and miserable land. The icy ridges of mountains gleamed menacingly in the sun. The snow glistened in an awful fashion. Even more troubling, they began to get the sense that there was someone behind them, even though they saw nothing.

Just as they had made their mind up to turn around, they crested a hill and before them a terrifying sight appeared.

The director, at this point in relating the story broke down in tears. I went off to fetch him a warm cup of tea to try to calm his nerves, but when I returned, he had left the room in an antic state. The girl in the office next door said she heard him screaming as he ran, something about “how they were made of ice.”

Disoriented and confused, he rushed out into traffic, and was hit by a car and instantly killed. He left behind in my office a map, hand drawn, of an expanse in Alaska. A particular section was circled on bright red and, underneath, in his trembling hand, he had written, “mors ultima linea rerum est.” The actress is still listed as missing, although, as he assured me when he began his tale, what happened to her was a fate far, far worse than that.

Which well known, very young to be married and now very young to be already divorced, reality star (C+ list) was found by her first husband in a mysterious manner? Apparently she comes from a curious village, thirty miles away from the nearest city, near the rocky beaches of grey and cold New England. He went to this village on a matter of nondescript personal business and found it a strange and bizarre place, full of silent villagers with odd customs and strange, fishlike facial features. Everywhere he went, there was the smell of the sea and it, it seems, always a villager watching him, with eyes as cold and alien as the granite grey skies above.

After the two married, he would wake up to find the bed empty on her side. He would look out the window of their modern glass home and see her standing at the edge of the ocean, standing ankle deep in the surf. She would come in the home before dawn with the smell of the sea about her and the smell of something else, something ancient and terrifying. The husband, distraught over this odd behavior, confided in a friend, a former B list movie actor now attempting to make a big bang on the small screen with a recurring guest spot. Little did he knew this friend knew all the ghastly details already, since he belonged to the same cult as our reality star teen bride, a cult dedicated to the worship of the dreaded sea god who was actually the girl’s horrid father!  I have

The old hospital on the edge of Los Angeles has a strange history to it. Clouded in rumours, lies, and truths all men pray are only lies, it was built by the infamous architect Wilhelm Fleischesser in the winter of 1919 and then closed, by merciful providence, in the summer of 2008. The sudden closure was explained by financial collapse of the housing market, but the hospital administration knew better.

The hospital had doubled, for years, as a filming location for many movies. If you were to see it’s long corridors and ornate courtyards you would be struck by an intimate familiarity with its architecture. What you may not realize is the hideous secret behind it.

This celebrity is A list in name only,  C list really. Scion of Hollywood royalty, he began his career  in films only and was legendarily depraved, even by celebrity standards. Frequent scandals with hookers, drugs, drugs and hookers did little to dilute his brand; indeed, if anything  it appeared to strengthen it. During his lucrative stay in a hit network television show, he agreed to film a small role as a doctor in an emergency room. The movie was made, of course,  in the accursed hospital, the last film to be made in that horrific place.

He was said to be immediately bothered by the atmosphere in the hospital, describing it as a frigid and cruel place. The elevators in particular, he said, rattled and creaked ominously and sometimes there was the sound of what almost sounded like footsteps on the top of the cars, a possibility he attempted to laugh off as impossible.

Or was it? For on the day he vanished from the set, he had complained of strange, clattering footsteps all about him, and the hospital elevators were all shut down, forcing him to walk from floor to floor.

After complaining of a queer and pulsing headache, he went into one of the stairwells, which is the last anyone saw of him, There was a noise, a desperate screaming and then, when the crew managed to open the doors, there was nothing — or no one — to be seen. Just a fedora on the stairs and a bowling shirt rumpled next to it.

This piece concerns itself with dread and cruel bargains with unknown forces that we can only hope to never see. In the midst of the first decade of this new century, two very famous couples, both well known for their complicated personal lives and grand professional successes (less known, perhaps, for the horrid dark secrets that throb and scream in their antediluvian Hollywood mansions), met for a fateful dinner. Both men were A++ movies only, although the husband of Couple B had certainly began his illustrious, princely career in the cloaked and mysterious worlds of television and music. The reason they met that fateful, wind-blown and rain-smeared evening involved the long rumored status of a hideous bargain the men had made with a mysterious creature who is said to lurk on the edges of man’s knowledge and sanity. Years later, in discussing the case, eminent scholar Dr. Charles Montgomery, notably of Miskatonic University of New England, dropped his voice when he reported that the other guests at the restaurants were forced to leave halfway through their meal, and that one, as he was leaving, swore that there was an inhuman sound in the kitchen, a curious and awful noise, a kind of squelching noise, like what a great fish would sound like if it was attempting to drag itself across dry land.  Although both couples would be seen alive again, there are unsubstantiated stories –from their doctors, their housekeepers, close family friends and family members people who sell their gossip to tabloids  — that none of them have ever appeared to be the same; that in some strange and internal manner they are no longer what we may think of when we think of human. Indeed, I have worked with one of the four in attempting to develop a pilot for HBO and there is something in his walk and curious habits that seems almost– what was that? A strange noise. Something at the door. Let me — oh god! No! It is him! It is him! No! No! He is not what I thought! He is no longer hu-”

Jason Katzenstein is a nebbishy, bespectacled Brooklyn-based cartoonist. When he was young he dreamed of playing for the NBA but had to give that dream up because see first sentence. You can find his work in publications including MAD, Scene and Scooter Magazine. 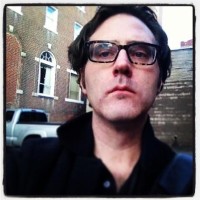 Kevin Sharp lives in Pittsburgh with his wife and two sons. He tweets @el_ksharp. His novel isn't writing itself.