It’s four-thirty am, and everything is dark and quiet in the Sunshine State. The people here won’t wake until the rays hit their faces, reminding them to play their morning round of golf. I jot down Google Maps’ perilous journey in my Rite-in-the-Rain field notebook, and set off. My road companions are 18-wheelers shipping cargo, giants next to my small white rental sedan. In the darkness, their headlights are my only reassurance that I’m not alone. I sip my coffee as I zip up I-75, turning off on exit 220B to head into the orange groves and abandoned mines, where the radar told me the tree swallows might be.

I arrive at the first potential locale. There is a faint tint of yellow on the horizon. I shut off the engine, get out, and lean up against my hood, swinging my binoculars to my face to scan the landscape. There are reeds everywhere. These wetlands are prime habitat for undead birds. Unlike other mythical living dead creatures, zombie tree swallows thrive in the light of day. Vampires will wait for you in the shadows, but these birds will parade right in front of you, and you won’t notice them. You won’t notice them until they attack.

I wait with my binoculars raised to my eyes. It limits my peripheral view, but the laser app I downloaded for them will protect me once I zero in on my target. The sun is rising; I see the first small orange semi-circle from this plateau, an abandoned mining reservoir turned wetland. The familiar chirping begins. Their sounds are like liquid running down their throat. Liquid that no longer supports their vital organs. Liquid that announces your impending doom. The sun is starting to turn the sky orange, yellow, pink, red, and I know it won’t be long. I move behind my car, putting a momentary obstacle between their beds (some sort of Typha sp.) and my blood.

Suddenly, they all shoot up. They already ate tonight (probably an unsuspecting duck.) You can tell by the trail of red that follows the tail of the flock’s tornado-like ascent into the abyss that is the sky. I start shooting at them with my laser binoculars. There have been mysterious deaths all along central Florida and I’m sure they’re due to these zombie tree swallows (when alive, Tachycineta bicolor, now that they’re dead, Tachycineta acolor.) But how will anyone believe me? With no institutional support, I have to take matters into my own hands. Enter Natalia Piland, Defender of the Living, Procurer of the Truth.

I’m kidding about everything after “These wetlands are prime habitat for these undead birds.” Once again, I’m off from the tree swallows’ actual roosting point by at least a few miles. Central Florida is full of wetlands, both “natural” and “artificial,” and the radar I use to try to find where the birds sleep definitely has an error margin. It takes about 3-5 days (depending on the landscape) to track these buggers down, so I have a lot of time in and on top of the car with binoculars to my face to daydream (by the way, driving with binoculars to your face is not recommended.) This particular daydream of zombie birds started the first field season in Florida, when Andrew, the graduate student my friend Ilana and I were working with, told us about how Aristotle was convinced that swallows, instead of migrating for winter, hibernated either in water or underground. True fact: this was believed up until the late 1800s, and probably by some until Monty Python’s Holy Grail, when the validity of swallows carrying coconuts during migration was discussed. Look it up on Wikipedia. We went a little further and added the Walking Dead factor.

The truth is that all of a field ecologist’s patience has, by law and practice, to go into their line of work. Nature is a flighty fellow and its secrets are not easily ascertained. While researching the winter ecology of tree swallows, I spent many hours pretending to be something else. Between wearing all black and headbanging to the Yeah Yeah Yeahs’ “Fever to Tell” in the car pretending to be Karen O and speeding at 90 mph while stuffing McDonald’s into my face at the same time pretending to be an “American as perceived by Foreigners,” I undertook a million personas in order to survive the countless hours spent at the wheel looking for large groups of this bird.

The tree swallow is a beautiful iridescent blue-green and white bird found all over North America during the summer and only in the southern latitudes (Mexico, the Caribbean, and the southern US coast) during the winter. It’s the only swallow to stay in the US at all during the winter and also the only swallow to eat fruit during the winter (they normally eat insects), two facts that might be related. This fruit, wax myrtle, could be a deciding factor of where the birds hang out. The Typha sp., or cattail reed, really does serve as their sleeping habitat, and could be another deciding factor. Thinking about these factors leads to what I actually study, how resource placement (whether it be food or shelter) across time influences the location, behavior, and evolution of different organisms.

In a place like central Florida, where housing developments are being raised faster than people are moving in (c. f. Everyone I met in Florida et al., pers. comm. 2010-2012), how these plant resources are being used by humans could decide where the tree swallows end up during the winter. While this has an intrinsic interesting “conservation” viewpoint (where we, all-altering humans put the fruit will decide where the bird goes, and if we decide we don’t like the fruit, the bird will no longer be around…potentially… more on this later), from an intellectual “nerdy academic” viewpoint, this has implications that will probably take 20+ years of research to determine if they’re really true, but are nonetheless fun to think about:

Do wintering populations stay the same as they move to breeding grounds?

Does what happens on the wintering grounds decide what may happen on the breeding ground?

Are they breeding between those two populations?

My own research looked to see if there was a connection between temperature and fruit usage. I think there was, at least in my field season. That’s science. I can only answer small questions in small situational constraints. Patience.

I put “conservation viewpoint” in quotations because I’m not actually worried about the tree swallow. They’re a species that if you ask any birder (see this link for an in depth view into what the “birding world” is) is not “sexy” because it is so common. The breeding biology of this bird has been studied for at least the last 20+ years, and some scientists have even called it a “model organism” for ecology. Tree swallows eat insects, which, if you’ve ever been in the swampy South, you know is not exactly a “sparse resource,” and the ones who migrate further south don’t even bother with the wax myrtle. If we were to get rid of wax myrtle in Florida, a lot of birds would die, but I think the species as a whole would be fine.

However, I am worried about the loss of an incredible phenomenon that the tree swallow partakes in. When I talked about the blood trailing “the tail of the flock’s tornado-like ascent,” I was referring to something that actually happens (not the blood, never the blood.) While wintering in the United States, they aggregate into groups of over 1 million birds, with some people estimating up to 8 million individuals in one group. Seeing them get together to roost is far grander than any daydream I have thus far come up with. Searching for their roost is more exciting than tornado chasing (AND probably less dangerous), and has a very similar aesthetic. If near enough to the action, you will see the sky go dark with birds, before seeing the tornado descend. And in the morning, you will see ribbons of birds chirping into the distance looking for their first batch of insect prey. Yet the people that live around them barely notice them; like the zombie swallows, the live ones hide in plain view. With the Sarasota Audubon Society, we organized some small birder trips to see them and with the radar were able to pinpoint where they were sleeping to see this incredible sight. At Venice High School, we talked about the tree swallows to try to interest them in something that basically only happens in their backyard.

Most field ecologists I meet are into nature for the “nerdy academic” science aspect. I think many of us would be happy sitting and speculating about the different questions that could be asked, imagining ourselves as field cowboys/-girls/-people decked out in safari gear communicating via walkie-talkies, running away from T-rexes, Jurassic Park-style. But, instead, we endure hours of searching in silence for nature to show us a clue to the questions we have.

We are constantly aware of the line between what we imagine and what is real, because what we only pretend to be is nothing when nature decides to show us something incredible. When I looked for my tree swallows, I wanted to know where they are, what they’re eating, and what implications that may have for the future. My daydreams won’t answer those, but reality might.

Enter Natalia Piland, Defender of the Living, Procurer of the Truth. 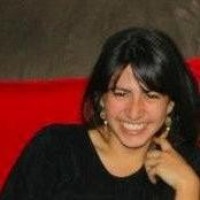 Natalia Piland studied Ecology and Evolutionary Biology at Cornell University and is currently the Amazon Program Officer at the Wildlife Conservation Society.