Gal Science: On What All Those Genetic Tests Actually Mean

As The Toast searches for its one true Gal Scientist, we will be running a ton of wonderful one-off pieces by female scientists of all shapes and sizes and fields and education levels, which we are sure you will enjoy. They’ll live here, so you can always find them. Most recently: On Dry Ground and in Floods.

When I was sixteen, my parents were still able to convince me to attend “Bring Your Child To Work Day.” Happy for a good excuse to miss a day of school, I obliged. My dad works at IBM, and that particular year (2006), there was a raffle towards the end of the day for various prizes. I tossed my ticket in and ended up bringing home a Genographic Project kit. The Genographic Project, funded by National Geographic and IBM, uses DNA sequencing technologies to answer fundamental questions regarding ancestry and how humans have populated the earth. The kit sat at home for a few months before I decided to submit a sample of my DNA (using a cheek swab) to their lab. After waiting for a few weeks for my results, I found myself staring at a portion of my mitochondrial DNA on my computer screen on a late September evening. 99.99% of the DNA that you (dear reader) and I share is the same; I had the privilege of examining part of the .01% that makes me unique. Navigating the website’s map and seeing how my maternal ancestors left Africa, migrated through Australia, and eventually landed in China hundreds of years ago made me enamored with the mysteries within our DNA and the power of computational biology.

The human genome consists of approximately three billion bases (A, T, C, and Gs). Whereas 1% of our genome directly codes for proteins, 99% of our genome is commonly referred to as “junk DNA,” as it is non-coding and contains myriad mutations humans have accrued through the evolutionary process. Single nucleotide polymorphisms (SNPs), mutations that occur during the process of DNA replication, are usually hereditary and contribute to biological variation between individuals. While SNPs can influence a variety of traits such as skin color, disease susceptibility, or response to drugs, the majority of them do not manifest physically, as they are more likely to be found in the 99% of noncoding DNA. The detection of particular SNPs can give extremely accurate, high-resolution results regarding both deep and recent ancestry. DNA sequencing technologies, similar to the one used by the Genographic Project, allow for the rapid determination of the precise order of nucleotides within our DNA to aid in the tracing of our lineage.

Through the years, DNA sequencing technologies have only gotten (harder), better, faster, and stronger. In 2006, the Genographic Project didn’t trace ancestry by looking for markers through our entire genome, but focused their attention on capturing very specific SNPs that could give information regarding ancestry. Today, companies such as 23andMe, Pathway Genomics, and Genetic Testing Laboratories are capitalizing on the power of sequencing technologies to provide customers with information not only pertaining to their ancestry, but also their susceptibility to disease for only a few hundred dollars. About a decade ago, it cost much more than $1 billion to sequence an entire human genome. Last week, Illumina unveiled a supercomputer that can process 20,000 genomes a year for $1,000 per genome. The hope is that as more people use these sequencing technologies, researchers can be better informed as to how DNA variations manifest themselves in disease to yield clinical breakthroughs in treatment and disease prevention.

But these DNA sequencing services have also received a good amount of backlash. On November 22, 2013, the FDA sent a letter to Anne Wojcicki, CEO and co-founder of 23andMe, expressing concern that the Personal Genome Service (PSGs) offered by the company did not provide accurate results. “The FDA is concerned about the public health consequences of inaccurate results from the PSG device…. We do not have any assurances that the firm has analytically or clinically validated the PGS for its intended uses, which have expanded from the uses that the firm identified in its submissions.” Kira Peikoff recently wrote a concerning New York Times piece about her experience with the personal genomic services: after submitting the same DNA sample for three different tests, she received widely different results about her risks for particular diseases. Her account seems to suggest that the SNPs these companies examine need to be further validated in both research labs and the clinic.

While learning about exactly what mutations predispose us to diseases such as heart disease, diabetes, arthritis, hereditary cancers, etc., is important, we should also become curious about how epigenetics works.

Let me explain: although only ~1% of our genome codes directly for proteins, no cell in our body is expressing the entirety of those genes at a particular time. The “central dogma” of biology dictates that DNA codes for RNA via a process termed transcription and the resulting RNA can be made into protein by translation. However, transcription of DNA into RNA will only occur if the initial portions of our genes of interest are exposed enough so that essential proteins that load onto the DNA double helix to initiate transcription.

If the DNA in our individual cells were completely unwound, it would measure approximately 1.8 meters in length. Within our cells, DNA is compacted to approximately 90 micrometers by wrapping itself around proteins called histones. When our genes are wound up against proteins, transcription factors won’t be able to access them and RNA message will not be generated. Many enzymes have the ability to add chemical groups to the histone proteins, altering the affinity of the histones to DNA. Some of these modifications allow for DNA unwinding while others prevent this process.

While genes are immutable, how an organism decides to make sense of them based on myriad environmental factors, is incredibly variable. Lone Frank, the author of My Beautiful Genome, elegantly defines epigenetics as “that almost mystical encounter between inheritance and environment.” Every cell in our body contains the same DNA; epigenetics explains why a liver cell expresses the proteins necessary for a liver to carry out its functions while shutting off genes that may be essential and specific to the function of brain cells. It’s important to recognize that epigenetic programming is an adaptive mechanism that can modify gene expression based on environment. Consider this: while you may have a mutation that in a gene that predisposes you to cardiovascular disease, eating a balanced diet and exercising frequently can perhaps prevent this entire gene from being made into a protein altogether. And this is where DNA tests fail – they can only detect for mutations in DNA, not measure RNA or protein production.

Although DNA testing kits could offer extremely valuable information pertaining to human health and disease, I don’t believe the general public is ready to get its hands on all that knowledge without a basic understanding of the interplay of genetics and epigenetics; this article is an attempt to remedy that issue. Companies providing these tests should also include pamphlets on how their consumers should think about their genetic information, and let the layperson know that what’s written in their genes are not an end-all-be-all. People certainly have a right to learn about their genetic information if they are curious, but that curiosity should also extend into understanding their results – instead of taking their genetic mutations at face value – by consulting genetic counselors or healthcare providers to get additional tests done if concerning mutations show up along the way.

We’ve come a long way in developing DNA sequencing technologies since our earlier attempts to obtain information on ancestry. However, I think it’s disappointing that the most trustworthy information we can glean (with even the most advanced of technologies) would still be the mutations that allow us to trace ancestry. I’m not arguing that sequencing for disease-related SNPs is futile, but rather that DNA sequencing should be complemented with other techniques that allow for detection of RNA and mutant proteins.

When Angelina Jolie publicly announced that she had a double mastectomy after discovering mutations in BRCA1, a gene involved in hereditary cases of breast cancer, she wrote in her letter to the New York Times: “Cancer is still a word that strikes fear in people’s heart, producing a deep sense of powerlessness.” Given what we know – and will continue to discover – about epigenetics, ‘powerlessness,’ is a word I would hesitate to use in describing the mutations in my DNA that make me unique, for better or for worse. 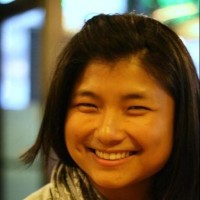 Wudan is a graduate student studying cancer biology in New York City. When she's not in the lab, you can find her doing chaturangas at the yoga studio, lost within the stacks of The Strand, hunting for ripe avocados, or at @wudanyan / @hypothesizin on Twitter.