My Uncomplicated Relationship With My Penis

This post was brought to you by A Reader. The Toast’s previous coverage of trans* issues can be found here. Most recently: Being Visible Online.

I am not the kind of trans person who has conflicting feelings on the subject of her penis. In fact, it would be fair to say I have a very clear concept of how I feel about my penis, free of uncertainty or doubt – I hate it. I fucking hate my penis. I hate it more than the sun hates the moon, more than the day hates the night, more than Khorne hates Slaanesh (and who could blame him?). My feelings for my penis have crystallised over the years into a jagged black jewel that serves no purpose except to stab at my heart in moments of weakness and despair.

I do not, strictly speaking, have a positive relationship with my dick, is what I am trying to say.

It was not always this way of course. In the Before Times I was kind of famous for the size and girth of my penis, and in an effort to overemphasise my false masculinity I owned that reputation. Songs like this travesty became personal anthems. I became intimately familiar with condom brands and the specific elasticity of their ‘Larger’ or ‘XL’ range for extremely practical reasons, then proceeded to rub those reasons in my friend’s faces. Someone I once called a friend stopped calling me by my name, and instead referred to me as ‘Horse’. Having the penis I had made it really easy to showboat my obvious maleness, and quell the raging voices of conflict and doubt I was suppressing with drugs and alcohol and cigarettes and ill-advised long-term relationships.

That said, I was never actually able to get it to work, though. Obviously that is not a concern for me anymore, but at no point did sex ever come naturally or easy to me as a man, because I found it really hard to stay erect when with a woman. I sustained almost no pleasure from sex, and if my ex had been the kind of woman to watch Archer she’d have spent a lot of nights telling me I was pushing rope. The thing seemed to be a mystery to me. I was attracted to women (mostly), but it did not react to them in a way that was consistent with that attraction. I started to believe that at some point every other penis-owning humanoid had been given a manual on how to operate their dicks, but mine had been lost in the post. It made me feel like shit, every time it failed me – and it failed me a lot.

Over time me and my ex figured out tricks to make it work, but they were just that – tricks. They all seemed to rely on telling stories, and my ex became really great at making up erotica on the spot while actively engaging in erotica. She’d tell a story about some dirty schoolgirl, or herself in a compromising situation, and looking back I can pretty clearly see what was going on and why they worked so well. The actual physicality of sex, the mechanical aspects, became static as she told the stories, and I was able to put myself not in the role of the male aggressor, but in the role of her, or the schoolgirl, or whatever. Anything but me. Anyone but a man. That’s what it took.

In quiet moments back then I would allow myself to hate my penis like I hate it now; imagining universes where I’d been born female or timelines where I’d come out of the closet years ago and had finished all the surgeries and hormones and everything else already. I knew what was going on, in my mind, but I did not want to give a voice to it, not then. It was easier to live a lie and go through a performance for the outside world while suffering immeasurable mental anguish than it was to be honest with myself. My ex thought it was because I did not find her attractive, which made it all even worse. At my darkest points I’d fantasize about cutting it off, or mutilating myself, but I was too much of a wimp to go through with self-harm of that scale, and besides, I knew it could only hurt my chances at getting support from the psychiatric community if I did. I may have been depressed to the point of suicide some days, but I wasn’t an idiot.

I don’t harbour fantasies about doing a quick and dirty home job on myself these days, because that would make the entire SRS process immeasurably harder, and I am not in the business of making life any harder for myself than it has to be; not anymore at least. A lot of days I can forget it even exists at all – I have next to no sex drive and don’t actually get a morning erection because of the cocktail of HRT drugs I’m on, so it’s not like it ever goes out of its way to make itself known. But that said, I still hate it, and I still want it gone, as soon as possible. Even if I had a sex drive, the mere existence of my penis means I don’t want to be seen naked by anybody short of a doctor or nurse, and that goes triple for sexy times. I don’t want anyone to touch it, or even acknowledge it, in a sexual capacity ever again. I don’t want to be with another human being until the problem has resolved itself once and for all, because until the moment I wake up out of the general anesthetic in a Thai hospital, SRS finally having been performed, I will feel less than whole – and I do not want to be with another person, ever again, until I am whole.

It is not a complicated relationship. 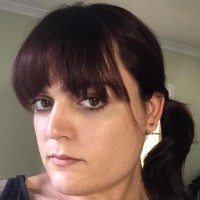 Molly is a nightmare made flesh in service to eldritch horrors from beyond the stars. She likes online shopping, doting on her cat and posting to her blog.