on May 16, 2014 in Gentleman Scholar Sponsorship

Many of us are justifiably sick of vampire stories. In the last decade, popular culture has been saturated by them, in forms ranging from Twilight and True Blood to mash-ups pairing the fanged monsters with everything from Pride and Prejudice to Amish romances. Though portrayed as truly alien and frightening in the original Dracula (1897), the vampire has since evolved into a romantic hero, a model boyfriend whose lust for blood is rivaled only by his devotion to a female love interest and his angst about being an immortal killing machine. As each successive vampire novel/movie/TV show/comic/sex toy arrives on the scene, it’s natural to find oneself asking, “Do we really need a new vampire thing?” The answer is probably “No.”

But what about a very old vampire thing? Particularly, a Victorian-gothic-pseudo-lesbian-lady-vampire thing? Yes. Your answer is “Yes.”

Carmilla is the story of a female vampire; it was, in fact, the first vampire story to have a female vampire as its protagonist. Irish writer Joseph Sheridan Le Fanu’s published the novella in 1872, a full twenty-five years before Bram Stoker would create the iconic Dracula. At that time, Le Fanu was popular as a writer of supernatural and mystery fiction, whose work was sometimes grouped with that of sensation novelists like Mary Elizabeth Braddon and Wilkie Collins. His popularity fell in the twentieth century, but most of his works are still widely available, even if they’re no longer widely read.

Carmilla is narrated by Laura, one of the vampire’s victims. She begins by recounting a strange incident from her childhood, in which she awakens to find a young woman kneeling next to her bed; she falls back to sleep, only to be awakened again by the sensation of being bitten. Fast forward a few years, and a teenaged-Laura and her father take in a young stranger—the eponymous Carmilla—who just so happens to resemble exactly the specter who appeared Laura’s childhood dream! Laura decides to overlook this eerie coincidence, and the two embark on an intimate, strange friendship. Carmilla is an odd creature—she sleeps through most of the day, refuses to divulge any of her background, and cycles between bouts of extreme laziness and frenetic energy. No one seems bothered by her behavior, except for Laura, who wavers between an instinctive dislike and an equally instinctive attraction:

I felt rather unaccountably towards the beautiful stranger. I did feel, as she said, “drawn towards her,” but there was also something of repulsion. In this ambiguous feeling, however, the sense of attraction immensely prevailed. She interested and won me.

As the friendship between Carmilla and Laura deepens, the young women of the neighborhood all begin to mysteriously die, and Laura herself dreams of being visited by “a monstrous cat,” and “two large needles dart[ing], an inch or two apart, deep into [her] breast.” Laura weakens, and as she and her father seek help for her mysterious illness, they hear a story of a man whose niece was killed by a vampire, a fiend who first came to them in the form of a beautiful girl named Millarca.

Carmilla was a major influence on Dracula; one can find traces of Le Fanu’s work in Dracula’s vampire lore, its setting, and some of the characters (Van Helsing, for instance, is clear descendant of Le Fanu’s Baron Vordenburg). One of the pleasures of Carmilla, however, is the fact that, as one of the first writers of vampire literature, Le Fanu gets to make up his own rules of vampirism. In his version, the vampire can walk through walls and, awesomely, turn into a giant cat. My favorite of these rules is the inexplicable requirement that the vampire has to use a name that, “if not her real one, should at least reproduce, without the omission or addition of a single letter, those […] which compose it.” It is thus revealed that Carmilla is also Millarca, and that these are fronts for a vampire named “Mircalla.” This rule is a convenient red flag for potential victims: if you ever meet an overly-friendly stranger named “Larmcali,” “Mrilcala,” or “Cllmraia,” you know that person thirsts for your blood.

Carmilla departs in significant ways from the sexual dynamics typical in post-Dracula vampire fiction. It is ubiquitous for vampires to be presented as highly sexualized figures, but usually in heterosexual configurations: male vampires hunting (and/or dating) human women or hyper-sexualized female vampires feeding from male victims. Le Fanu similarly casts vampirism in sexual terms, but within the limits of female desire. Carmilla’s hunger is framed as an intense romantic and sexual attraction to Laura, who describes Carmilla’s bouts of fevered attention:

Sometimes after an hour of apathy, my strange and beautiful companion would take my hand and hold it with a fond pressure, renewed again and again; blushing softly, gazing in my face with languid and burning eyes, and breathing so fast that her dress rose and fell with the tumultuous respiration. It was like the ardor of a lover; it embarrassed me; it was hateful and yet over-powering; and with gloating eyes she drew me to her, and her hot lips traveled along my cheek in kisses.

One could argue that Le Fanu uses Carmilla’s apparent homosexuality as a sign of her monstrosity, her “unnaturalness”—it certainly wouldn’t be the first or last time in literature that female homosexuality has been aligned with evil. But the complexity of Carmilla as a character—and Laura’s confused responses to her advances—belie any easy interpretation. Carmilla is a monster and a murderer, but she also desperately seeks love and tries to give it to Laura. To be sure, her conception of love is twisted—she seems to regard feeding on Laura as a form of romantic and sexual fulfillment, declaring, “I live in your warm life, and you shall die—die, sweetly die—into mine.” But her love is nevertheless seductive in its intensity, especially for the young, isolated Laura. Throughout Carmilla, Laura is caught between simultaneous feelings of repulsion and rapturous longing. She writes of Carmilla’s attention,

In these mysterious moods I did not like her. I experienced a strange tumultuous excitement that was pleasurable, […], mingled with a vague sense of fear and disgust. […] I was conscious of a love growing into adoration, and also of abhorrence. This I know is paradox, but I can make no other attempt to explain the feeling.

When Carmilla first approaches her romantically, Laura seems legitimately surprised that a woman might act this way toward another woman, even wondering briefly if Carmilla is a boy in disguise, come to court her. She wants to recoil, but doesn’t, writing that “From these foolish embraces, […] I used to wish to extricate myself; but my energies seemed to fail me. Her murmured words […] soothed my resistance into a trance.” It is up to the reader to decide whether Laura’s nonresistance is due to some hypnotizing effect of the vampire, or to her own nascent desire.

Carmilla is often cited as the prototype of the subgenre of lesbian vampire tales, found chiefly in exploitation films of the 1970s. One of these, The Vampire Lovers (1970) is a loose adaptation of Carmilla. As with most mainstream lesbian porn, however, these movies have less to do with the women involved than with the titillation of straight guys, placing men and male desire firmly at the center of the narrative. This is a far cry from Carmilla, which figures male influence (appearing in the form of fathers, priests, and doctors) as entirely peripheral to the drama taking place between Le Fanu’s finely drawn female protagonists.

Most of the men in Carmilla are oblivious and ineffectual, if not downright stupid at times. (Seriously, there are multiple episodes in the story that go like this: Laura: Hey Dad, don’t you think it’s kind of weird that the woman in this 150 year old painting looks exactly like our houseguest?; Laura’s father: Nope. End scene.) The men finally rally at the end of the novella to vanquish the vampire (rather gruesomely, I might add), but their “victory” over Carmilla is muted by her enduring effect on Laura. Laura is passive in the final scenes, but though she is no stake-wielding vampire slayer (Sorry, Buffy), she finds agency as the writer of her own story. She refuses the simple resolution that the male vampire “hunters” would seem to offer her and instead insists upon her own complicated, unresolved emotions. Even knowing of Carmilla’s vampirism and the countless people she has killed, Laura lingers upon the vampire’s duality and her own conflicted attraction: “to this hour the image of Carmilla returns to memory with ambiguous alternations—sometimes the playful, languid, beautiful girl; sometimes the writhing fiend.”

At only 70 pages, Carmilla is a short work that manages to pack in a lot of creepiness, narrative complexity, and moral ambiguity. It is worth reading both as a progenitor of the vampire genre and as a nuanced portrayal of a female relationship—part romance, part horror story—that exists outside the confines of masculine power. Better yet, it’s available for free. 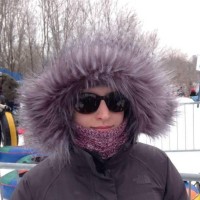 Lara Rutherford-Morrison has a PhD in 19th-century British literature. Her research focuses on the ways that contemporary pop culture reimagines the 19th century (in films, fiction, comics, and so on), which is mainly an excuse to watch period movies and read trashy books. She lives in Montreal.