“No New Friends”: The Drake and Meg Wolitzer Fanfic

It was another lonely night on the tour bus for Aubrey—known to almost everyone in the world as the Grammy-winning, platinum recording artist, Drake—but still Aubrey to his mom back home in Toronto.

Feeling listless, he opened up the book he’d been reading during this leg of his tour, The Ten Year Nap, by Meg Wolitzer. It was hard for Drake to shop for books these days. He’s so famous, and paparazzi follow him everywhere. One day he’s in a bookstore, the next Us Weekly is reporting that he’s dating the girl who works behind the counter (he did give her his number though, so maybe that one’s on him.)

So, before he embarked for his thousand city world tour, he sat in front of his computer and plugged the words “women,” “love” and “friends” into the Amazon search bar. After all, aren’t those the three things Drake cares most about in this entire world? Isn’t it his considerable knowledge on those topics that launched him from the wheelchair kid on Degrassi to the top of the charts? When Meg Wolitzer’s novels appeared, he figured, what did he have to lose? He couldn’t stand those Twilight books Rihanna was always recommending. Sometimes when they’re together, she prattles on endlessly about Jacob versus Edward, and how maybe there are only two types of guys in this world. He doesn’t like that kind of talk; it makes him think that when she’s talking about Edward and Jacob, she really means Drake versus Chris.

Edward, Jacob, Bella: He couldn’t relate to any of those characters. None of them were like him. Then again, is anyone? But having your life turn out differently than you expected? Struggling to balance what everyone expects from you in relation to what you want for yourself? That’s something Drake could understand. So he clicked purchase on The Ten Year Nap (in addition to a new vaporizer and a new Coach bag for his mom), and waited for his package to arrive.

Now, he’s been reading the book, making his way through and enjoying it, but he couldn’t say that anything about it has possessed him. Until, towards the end of the book, he read this incredibly important, game-changing line: “’No new friends.’ This remained her theme as she made her way through the rest of her first winter in Holly Hills.”

No new friends, huh? He liked the sound of that. Had he heard it somewhere before? Or did this Meg Wolitzer coin the term? Isn’t that the same standard he held himself to? He quickly pulled up the author’s Wikipedia page. She wasn’t even from Toronto! How could someone who’s not from his city understand the true bonds of friendship the way he did?

Without thinking, he pulled out his notebook and began to write. More than he had in months. He couldn’t believe the inspiration this line alone was giving him. But he stopped himself. These are borrowed words, he thought. They’re not mine to create a rap or a hook or autotune. He put his pencil down and went to bed.

He needed to call Meg Wolitzer and ask her permission to borrow her line. He didn’t care what it cost. Thousands, millions; those words needed to be his. One night he picks up the phone and makes a very different drunk dial than he’s used to. He gets her number through a friend, because when you’re Drake, you can have anything you want.

“Hello?” Meg Wolitzer answered the phone, confused by the area code and to be receiving a call so late.

“Hello. This is Drake,” he replied.

“The rapper,” he said, bashfully. He wasn’t used to people not knowing who he was.

“Oh yes. Lena’s assistant told me you might be calling. Um, how can I help you?”

Drake began to explain his story. About how he read her book, and fell in love with her words. He could swear, as he told her more and more about himself, and what he stood for, he could hear her smiling on the line, a million miles away, but closer than he’s ever felt to a middle-aged woman before.

He comes to visit her when he’s in New York, and they sometimes meet up when her book tours coincide with his schedule. She’s busier now, of course, thanks to the success of The Interestings. When she showed him the manuscript before it was published, he knew that this would be the big one for her—what would transform her from his favorite author to the favorite author of others like him across the country.

Each time he sees her house on Long Island, he’s increasingly impressed by it. It’s large but not grandiose, quaint without trying too hard to be so. It’s exactly the kind of place he could see himself coming home to at the end of the long day, with kids waiting for him upstairs and a wife already in bed, while he composes his next hit about falling in love in the strip club. (The house would obviously have to be in Toronto, because roots are everything.)

He and Meg drink tea together on this early spring afternoon. It’s still too cold for a swim, but just warm enough for a long walk on the beach, which they take after the Earl Grey is drunk and the biscotti polished off. They talk about life and love, and even sex, the usual topics for a 27-year-old rapper and a 54-year-old novelist. He can’t thank her enough for the inspiration she’s given him for his latest album and he tries to write her a check.

“Save it for your old age,” she tells him, waving it away.

“I have plenty of money for when I’m in my old age.”

“Then buy a sports car with it. I have everything I need. YOLO.”

“YOLO. You only live once.”

“Huh, that’s a good one. I might have to borrow it,” he tells her, finishing his tea and savoring its bittersweet flavor in his mouth. 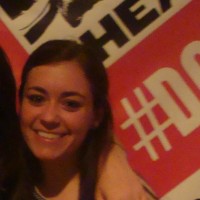 Lana Schwartz is a writer living in New York City. Follow her on Twitter at @_lanabelle, but only if you dare.