Brenna Hillier last compiled a catalogue of imaginary girlfriends for us.

What are spiders even for? Has anybody ever proved they fulfil a useful ecological niche? I ask this while covered in dozens of mosquito bites, and surrounded by the buzzing of flies, before you break in with that guff about them keeping insects under control. What possible use is a predator that sits around hoping the more stupid examples of its prey will just happen to fall into its web? Spiders are probably just making insects stronger, via survival of the fittest. A three dollar plug-in zapper is several thousands times more effective than a spider. My mother once told me the resident huntsman kept other spiders away. “Mother,” I said, with great patience under the circumstances, “That is like hiring a thief to guard your treasures, only the thief is terrifying and could kill you at any moment.”

Family legend has it my first Australian forefather left Kent after being ordered by his master to get a spider out of the bathtub. Preferring to risk Penal Transportation, he cleared out the cutlery and legged it (bravely making it as far as the stables before being collared and hauled away). England is an old country, sagging with history and especially with cobwebby little corners in looming country mansions. Australia, he reasoned, is a roomy country. Plenty of space to get out in the open and build a spider-proof house with glass walls, so you can see them coming and load the trebuchets.

If this does not demonstrate the need for wider education of the downtrodden masses I don’t know what excess of ignorance is required. In Australia the spiders bow the floorboards when they scuttle across the living room carpet; they are so big that, so the old gaming joke goes, they have health bars. The ones that aren’t gigantic are poisonous, and either kill you so fast you can’t get help or so painfully that you wish they’d just get on with it. (Nobody has died of spiderbite in Australia since the 1980’s, apparently, because of the wide availability of anti-venom. Possibly this is spider propaganda.)

While my defensive tactic against spiders is to lay down enough barrier spray to raise a visible welt at all entrances, my housemate prefers a reactive response. Many are the mornings I have awoken to the merry sound of him screaming in horror at whatever has crawled out of his bath drain, followed by the whirring of the vacuum, which goes on for several minutes in order to “break all their little legs”. (Yes, I’m sorry, but otherwise they might crawl back out and seek revenge, he says.)

There really are a lot of legs. Too many legs. Far too many knees. It’s unnerving. It was my theory for some time that spiders did not originate on Earth; they were the putrid offspring of Ridley Scott-style aliens and demons from some forgotten dimension accessible only in all-night shopping malls in the middle of convention season. Now that I am a modern enlightened woman I know that their offensively non-standard physiology has to do with the Earth’s lacklustre approach to mass extinction.

Earth is not a great place to be a species because it’s forever being hit by space rocks, having ice ages, letting bacteria fill the atmosphere with that radically poisonous “oxygen” stuff, and routinely setting off massive chains of volcanic explosions, the seismic equivalent of rolling over in bed and farting hard enough to blow your partner, pet and duvet across the room, where they explode.

Every time life starts really getting somewhere on Earth, really settling in as a dominant paradigm of megafauna, something horrible happens and it all goes back to the drawing board. That’s why pretty much everything* wandering about on the surface today is built to the same basic plan of “head and spine; limbs optional”: everything else is dead.

If you go to museums (I recommend the old-fashioned and perfectly lovely South Australian Museum, if you’re ever in the hemisphere) you can sometimes see slabs of sea bed covered in fossils from, for example, the Cambrian period, in which the great canvas that is evolution got into the hands of forces equivalent to you in your second year of art school, you know, that phase where you smoked a lot of clove cigarettes, wore berets and went out with a philosophy major (thank you) while turning in decomposing sandwiches draped over chrome-plated dildoes and sneering a lot.

Most of those things went extinct, the way most of everything that has ever lived on Earth has gone extinct, but knowing they were there exposes the contingencies of evolution. If you don’t think about evolution that much – and why would you? You are behind on Hannibal – it’s easy to think of it as somehow purposeful; as having intentionality, or a plotline, with the end result of intelligent chimpanzees. Human beings are the perfect shape for human beings – mostly – so naturally this is how Things Are Supposed To Be. But life could have evolved in trillions of different directions and we could just as easily (if not more easily) have been seventeen-legged slug-like creatures who suck food up through holes on the back of their heads and consider it perfectly normal. Being the shape we are is exceedingly unlikely (this is one of many reasons why Star Trek is ridiculous but if you mention this while Captain Janeway is talking I will cut you) because being any shape is extremely unlikely.

In this context then, spiders make sense. They are a leftover from a time before our particularly attractive branch of terrestrial life rose to dominance. Unfortunately, they are not a dead end but a rather successful model. They hang around reminding us that if we could be transported into contingent realities populated by the never-born descendents of things that were less good at hiding when the rocks fell out of the sky we would be terrified and cry and run off cliffs. Probably while the seventeen-legged slug things laughed at our unwieldy shapes.

Something about a creature with eight legs and an exoskeleton reaches right down into my hindbrain – and the hindbrain of anyone likely to contribute increased life-expectancy to our gene pool – and flips all the switches marked “horror”. I often try to reason with spiders. “Please just don’t ever move, ever,” I beg them. “It will all be fine if you never move in that inexpensive stop-motion animation that makes me want to claw off my own skin and bleach my eye sockets.”

Later, the debate takes a different tone. “Please move, spider,” I plead. “Please don’t sit there, three feet from my face, staring with your ten billion tiny eyes and gently twitching your enormous fangs. Scuttle off. The momentary fear will be worth it. I just don’t want to see you at all.”

Then, perhaps encouraged by a few lobbed shoes, the spider goes away, and you no longer know where it is. “Where are you, you fucker,” I roar, perched on a carefully inspected stool in the center of the room, waving a can of Mortein and a lighter (a thing you must never do except in extreme cases of spidmergency). “Are you in my bed? Are you under the toilet rim? Are you crouched on the shelves ready to spring on my fingers as soon as I reach for a Margaret Atwood novel? I need to see you.”

I have heard it espoused that spiders would be much more bearable “if they would just make a high-pitched screaming sound, so you know where they are at all times.”

I patted the hand of the earnest-faced friend who suggested this. And then I went home, to cry in the shower. I will never sleep again.

*”Everything” by broadly recognisable type. There are more species of insects on Earth than there are human beings, let alone individuals – many of them in your mattress. Try not to think about that at two in the morning when you wake up worrying about the super volcanoes. 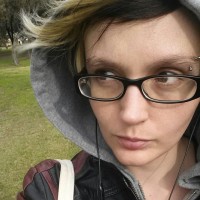 Brenna Hillier lives in Australia, where she writes about video games for a living and works on her monitor tan.