Mr. Freeze and the Velociraptor Rumble in Van Nuys, age 9

Some experiments with camera angles and lighting may have preceded it, but I believe this was my first production to have any sort of narrative. The narrative was this: Mr. Freeze fights a velociraptor, and the velociraptor wins. The action takes place in Van Nuys, CA, specifically in my parents’ house, more specifically on their living-room floor. Mr. Freeze and the velociraptor play themselves, or rather, my brother’s action figures of these characters play them.

This was a stop-motion movie, so the action figures appear to move on their own, although “move” is sort of an overstatement. Mr. Freeze stands stock-still, and the velociraptor turns around very slowly and clotheslines him with his tail. Mr. Freeze is apparently defenseless against this onslaught; he falls over backwards, “dead.”

What I learned: When you make a stop-motion movie, the sound is stop-motion, too. So if you’re shooting in your parents’ house while someone is mowing the lawn outside, your soundtrack will be weird, loud, choppy noises, like Mr. Freeze and the velociraptor are fighting inside an MRI machine. This effect is kind of interesting, but also very distracting.

This was really my brother’s film. It was “based” on a terrifying Howdy Doody doll he got for his birthday. Neither of us had ever seen “The Howdy Doody Show,” so in our version it became a game show. Howdy Doody was played by our mom, wearing an orange clown wig. My brother and I were the contestants; the prize was a minivan. The point of the show was to answer trivia questions — they were extremely absurd, and we, the contestants, were very stupid.

At one point, Howdy Doody asked, “How long would it take to stick this carrot up your nose?” I spent the rest of the film trying to shove the carrot in my nostril, stopwatch in hand. At the end, Howdy Doody keeps the minivan.

What I learned: The time it takes to stick a full-sized carrot up your nose is, essentially, infinite.

This is where I really hit my stride. I wrote and directed this movie; I also played two roles. Actually, it was initially called Death Three Times Over, but I added one more death so I could play the victim, a “college student.” I think I was eleven and had recently worked out what a college student was. I correctly intuited that such students are often featured in horror movies.

In Death Four Times Over, an evil cyborg comes to Earth from another dimension and kills people (four of them). The cyborg was sort of inspired by Terminator, which I hadn’t been allowed to watch but was vaguely aware of. The kid playing the cyborg wore black clothes and a Nintendo glove. Mostly the glove did the killing. In one memorable scene, a kid is standing in front of a white sheet (the space-time continuum, maybe), when the cyborg reaches over it and glove-strangles him.

I also played a psychic in this movie. I can’t remember why a psychic was needed to fight the cyborg; I probably just wanted to wear makeup and sound important. I’m pretty sure the final shot is of the Nintendo glove, separated from its owner, its work done.

What I learned: You can’t really film chase scenes just by running after someone with a camera. Also, cyborgs are cool.

This might have had a better title, I just don’t remember what it was. The year after Death Four Times Over, we made videos at camp again. When I said I’d like to make something like my previous film, the head counselor’s face darkened.

“Death Four Times Over was not a good production,” he said.

In an effort to make the movies that summer more wholesome and less deathy, the camp decided to require that each one have a moral. I’m pretty sure every group chose “teamwork.” Our movie involved our team dividing up clues to find a buried treasure. Beyond this basic premise, it was entirely composed of in-jokes. The only one I remember concerned one kid’s relationship with one of his boots: He treated it like a beloved pet or possibly a close family member, kissing it and talking about its feelings.

What I learned: Morals are stupid.

This was kind of the culmination of all my movie efforts. Nominally it was supposed to be a project for seventh-grade English, but I think we all saw it as an opportunity for extended fucking-around. I don’t remember who (if anyone) adapted the script from the original Homer, but I think I tried to act like I was in charge. My friends and I wore bedsheet-togas that we affixed to our t-shirts and shorts with safety pins. We conscripted a number of younger kids to play minor roles. The sixth-graders played Lotus-Eaters, which meant standing in ivy and chomping on nasturtiums. My brother, in something of a comedown from his earlier role as writer-director, played one of Odysseus’s men who gets turned into a pig by Circe; we shot some footage of him, cut, then replaced him with a stuffed pig from a McDonald’s Happy Meal. We tried to shoot Odysseus and Circe together in my parents’ bed (like a lot of things in seventh grade, this movie was an excuse for us to sort-of-but-not-really make out with each other), but my dad kicked us out, understandably. Later we tried to shoot a scene with Odysseus and Calypso, but Odysseus kept cracking up when Calypso said, “Stay, and bear children with me.” (In retrospect, I’m pretty sure I wrote that line). I don’t remember if we ever got it right.

We tried to shoot a scene with Nausikaa by the river. I played Nausikaa – the fact that it was my only role in the film suggests either that I had matured since Death Four Times Over or that I lost an argument. We shot the scene at the botanical gardens; I put on my bedsheet and stood in a creek. Another one of my friends stood in the water a few feet from me, filming. Odysseus kept telling her to back up to get a better shot, until finally she lost her footing and keeled over backwards, submerging herself and the camera in the water.

She later noted that we all ran straight for the camera, seemingly unconcerned with her wellbeing. We weren’t fast enough; the camera was broken, and that was pretty much the end of the movie. If memory serves, we edited together what we had in some semblance of chronological order. The result was disjointed, had no Cyclops, and ended, I’m pretty sure, with someone dying in an unspectacular fashion. I guess at least it was realistic.

What I learned: Movies are complicated and a lot can go wrong.

I made at least one more, a high-school Spanish class effort too profane and embarrassing to go into here. Over time I switched to writing, where I am in charge all the time, and a lot can still go wrong, but at least all of it is my fault.

Anna North’s second novel, The Life and Death of Sophie Stark, is out today. 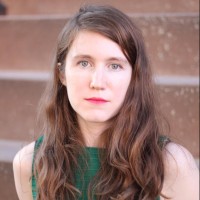 Anna North is the author of the novels America Pacifica (Reagan Arthur Books/Little, Brown, 2011), and The Life and Death of Sophie Stark, out now from Blue Rider Press. She is also a staff editor at The New York Times.