He stands with his back to the room, gazing out a window glazed with rain, a snifter of fine Scotch gripped tightly in his left hand. I notice the whiteness of his knuckles, the hair curling over them in still-black rococo swirls. He is still angry.

He doesn’t know I’m watching him. That fact makes something unfurl warmly in my abdomen–a rush of heat, like a heating pad that warms you from the inside, said inside being dark with d e s i r e.

I clear my throat. “You were magnificent.”

He doesn’t turn around.

“Yes,” I say, stepping forward tentatively from the brightness of the hall to the dim living room, lit only by rain-streaked moonlight. I want to touch his shoulder. Do I dare? I do.

He turns around to face me then, his eyes as icy blue as any fjord (especially, however, a pure fjord, such as one might find in the reaches of northern Finland or the teal-hued heights of Alberta, berimmed with arctic mountain snow. Hard, cool, implacable.)

“Was I? Not magnificent enough to stop that bastard.”

In his eyes I see a pain, a rage, barely restrained beneath a thin veneer of civilization. Although I grieve for the events that led to this pain, I can’t help but feel a tiny bit excited.

“You were wonderful,” I say. “You took one look at him, in that cheap suit, and made him feel like you didn’t know he was human too.”

I pause, giving him one of my most knowing looks. “And I liked it.”

“Don’t give me the smokey eye,” he whisper-screams. “Our daughter’s future is in tatters! He’s going to have her for the rest of his life–possibly in another galaxy! She will go wherever he go!”

He suddenly hurls his Scotch at the wall, his face a mask of anguish. With a single, catlike gesture, I catch it, spilling but a few drops upon the Kashmir rug beneath our feet.

“Don’t be so dramatic,” I spit. “Gwendolyn may be going through a dirtbag phase, but we didn’t raise her to tolerate the snakey-hipped antics of a beanie-crowned fop! Today he’s a husband, tomorrow–a memory!”

“How can you be so sure? What if–god forbid–there are grandchildren? Isn’t it wise to seek some kind of rapprochement?”

“Tough luck, my friend, but the answer is no! You made him a promise.” I stroke my hand down his solid, well-muscled chest. “What happened to the man who said he’d never give his blessing till the day that jerk died?”

I drop my voice, sotto voce, pressing my breasts into his arm. “What happened to the man who used to violate me on every pool table in Cairo?”

I take his thick but flaccid penis in my hand. It instantly springs alert at my touch.

The silver fox claps his hand over my mouth. With the other hand, he suddenly rips my delicate peach sweater with a single tear. Threads flutter to the floor–I almost imagine I hear one falling, winging as softly to the ground as a dying butterfly (or moth.)

“I’m an old-fashioned man, Nesta,” he says, withdrawing a heavy breast from the confines of my Maidenform. The ivory flesh seems to leap forward, eager to meet his touch. “Once I say it, no will always mean–” He pauses to roll my nipple between his strong fingers, then breathes into my ear. “–no.”

Joe pulls me to him by the string of pearls around my neck, looping it through his fingers. As savage as a beast now, all proprieties forgotten. He suddenly clenches the pearls betwixt his fingers, tightening them at my throat, and takes my mouth with a kiss as unrelenting as it is powerful, like a reciprocating piston pumpjack plunging into a Texas oil well.

“Shut up,” he says. Then Joe takes the snifter from my numb, weightless hand, and pours the rich amber Scotch all over my ample, quivering bosom. He dips his head to lap the super-expensive liquid from betwixt my breasts. A wild finger snakes wildly through my [pants or skirt–the video doesn’t make it clear] and into my silken undergarments. The flower of my secret opens to him, exuding a power that terrifies both of us. I’m pretty wet, by gum!

“My sweater is ruined,” I gasp, suddenly angry, suddenly and totally in control. Then I push him to the floor. Quickly, I yank down his gabardine slacks, exposing everything I ever needed. I raise myself on my haunches, and then impale myself upon his maleness, swallowing him completely into my vaginal mystery.

He smiles softly and flips me onto my back, making my fragile frame shake as he pounds his hard maleness straight into my matrix. “Oh Joe,” I scream, on the verge of the little death. “Why you gotta be so . . . RUDE!” 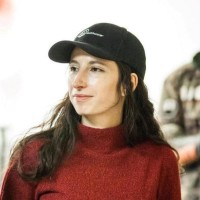