Not Your Idea: Cultural Appropriation in the Birthing Community

I studied every book I could find on childbirth and parenting in my local library when I was pregnant for the third time with my first viable pregnancy nineteen years ago. I was a young Native/mixed woman and my partner a young Native man, but I had been adopted and raised by a white family. Knowing I was going to be a mother with so little connection to my culture made me anxious to learn about where I really came from.

The book options from my library were pretty limited, so it was probably a miracle that I found out anything about babywearing at all. It didn’t even occur to me that there are still Native women who use traditional cradle boards, so I bought a front-carrier of the sort that is no longer available. When my son was three days old, I wore him on the bus to his first appointment at the pediatrician. I found carrying him to be an empowering practice. It helped to keep him calm, and it kept my hands free to type long letters to his father, to handle the laundry, and otherwise be able to do the things I needed to do.

It wasn’t until about seven years later, when I had a Nicaraguan partner, that I had the opportunity to see Central American mothers wearing their babies on their backs in blankets. In the last 10 years, thanks to the internet, I have seen a resurgence in accessible information about babywearing. Unfortunately, most information and marketing is geared towards middle class white women, often with selling points about this great “new” phenomenon and requiring expensive contraptions, while disregarding the communities of color in which babywearing has been the norm since the beginning of time. This is evident in the lack of Black and Brown families present in most marketing campaigns and even social media. Four years ago I started a Tumblr dedicated to just showing people of color babywearing, and it was difficult to find pictures to post (this has since improved somewhat). It was also met with anger from white women who said that there was no need for a blog just for families of color and that it was “exclusionary.” They seemed to totally miss the irony of that term.

From the Quiche Maya of Guatemala to the Zulu of South Africa to the Hmong of the mountains of Asia, babywearing has always existed and been maintained by many women despite colonization and demands to assimilate to European/USian standards that subsume our traditional cultures. Like the history of babywearing, the tradition of belly-binding has also been maintained by many marginalized people and yet I knew nothing of it. Only just this summer I was taught as part of my doula training by International Center for Traditional Childbearing how to use the baby wrap during pregnancy for belly support and after pregnancy for belly binding. Suddenly, so many of the traditional clothing styles that incorporate elaborate scarves at the hips or wrapped around the waist in Nepal, Tibet, Egypt, my own tribe, and other cultures make new sense.

Imagine my surprise then to see this Mothering.com article being widely shared on social media by white lady birth workers who I thought should know better. The author, a white woman, says she “discovered” belly wrapping as a means of supporting her pelvis and belly during her second pregnancy. While babywearing has become more common, belly wrapping is still a total marvel to white women but like babywearing, white women have happily capitalized on the chance to “teach” these skills. For some reason, they feel compelled to market workshops with exotic-sounding names like “Mexican Rebozo Use” and “African Belly Binding” to get their fellow white ladies interested. I am not suggesting that white women should not practice belly support/binding and babywearing. The benefits of both are so great that they should be widely known and practiced.

What I am uncomfortable with is white women who write articles in which they say they “discovered” these techniques and speak as authorities without ever giving credit to the history and cultural truth of these techniques. Giving credit means much more than using a “foreign” word and pretty “ethnic” print on your website and flyers. It also means delving deeper than referencing the “quaint” practices of one or two cultures that you have no significant connection to. I have a problem with white women birth workers teaching workshops, and being paid to do so, in which they introduce other predominantly white women to these techniques without questioning why they feel they are the experts on the subject, why they are teaching predominantly white women, how appropriative they are being, and how to more thoroughly integrate credit where due and a proper understanding of the history and cultural significance of such practices in non-white communities. It is a problem for me that when I try to share knowledge from my own cultures with fellow marginalized women seeking that cultural connection, I am spoken over by white women who went to a training or read a book, but have never actually worked with someone from my cultures.

Parents of color often talk about how we are met with two common reactions when we do things that we have reclaimed as part of connecting with our own cultures. Either people tell us that we are “backwards” and that these things are “primitive,” they tell us that there is science (because what our ancestors did obviously was not based in any science) and new theory, etc. Or they exoticize us and our cultural practices wanting to hear all about it and, if we are open to sharing, they suddenly become “experts” on the subject and we shortly thereafter find them teaching or writing obnoxious articles such as the one linked here. Much like many other “natural parenting” methods that have become popular again in white cultures, there is little introspection of how colonization has tried desperately to break families of color from breastfeeding, babywearing, and other traditional healing methods. Midwives and doulas have become associated with a degree of privilege, often completely inaccessible to the most marginalized communities who would actually benefit the most from such access. Home birth is taken for granted as something that a white family can choose, but families of color for whom it was a family norm in the past are now forced to accept invasive medical procedures under threat of having their children removed from the home with charges of medical neglect.

It is worth noting that traditional forms of babywearing and belly-binding did not require owning multiple $50-200 wraps or strappy carriers. All one needs is a long scarf, piece of fabric, or blanket. One can argue that it was only a matter of time before wraps became commercialized, and that marketing of wraps is responding to a demand. On the other hand, I would suggest that such marketing is exactly what makes these options seem “not for you” to many poor parents of color for whom such an expense is simply not realistic. Instead of teaching that belly-binding and babywearing can be done with one item, and showing how any scarf of a certain size can be functional, marketing suggests that babywearing is complex and expensive. For poor and non-white women who are also at a higher risk of accusations of neglectful caregiving, the question of safety is also very real. Marketers are quick to imply that carriers and wraps are necessary for safety despite the fact that women all over the world continue to wear their babies with a thin cotton scarf and no problems. It isn’t about the type or cost of your wrap, it is about being knowledgeable about how to use it safely. Access to the traditional knowledge of our ancestors and support to acknowledge that wisdom and methodology is a key missing ingredient because it has been appropriated by white women who fail to do outreach to the communities from which they have stolen the traditions.

We all want what is best for our babies. As a doula, I tell families that the most important thing is for them to have all of the necessary information that allows them to make an educated and conscious decision about what is best for their own situation and needs. This is true regardless of one’s ethnic background or culture — knowing one’s options is invaluable. Unfortunately, there is real disparity in the access to that information, and lack of culturally competent support, for many families of color. When white women take credit for discovering our traditions, it dishonors our history and our cultures while withholding support for these traditions from those of us for whom it is a valuable part of accessing our own ancestral powers. Appropriation is not an innocent act. It hurts us economically, in health disparity, and micro-aggressive ways that I would argue are not micro at all but instead contribute directly to systems of continued marginalization. 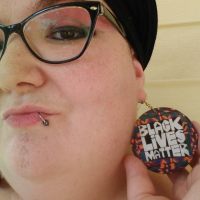 Aaminah Shakur is an artist, poet, doula, and healer whose work centers women of color, queer women, disabled women, and survivors of sexual trauma experiences and needs. Their website is aaminahshakur.com.