Weirdness as a Love Language: Why I Sent Creepy Christmas Elves to My Sister

Like most members of the human race, I love being told what to buy. I am also, in my heart of hearts, a snoop, so I like to know what random Internet strangers find valuable. I rarely purchase any of these recommended items, as Canadian duties and shipping costs on these largely American-crafted lists are often prohibitively expensive, but one Friday in the late fall of 2012, an item on a Jane Marie Bargain Bin stopped me dead in my tracks: tiny Christmas elf candlestick holders in aseasonal shades of blue, green and silver, with faces sliced cleanly in half.

I do not know if my mouth gasped, but surely my soul did.

My Christmas tastes are, for the most part, fairly conventional. I shrink from garish, Griswoldian displays of excess; I like white lights and white birch and dark plaid and mahogany wood. I like these things not because they remind me of a department-store window, but because they serve as a backdrop for something more: a toddler-crafted ornament, or a tacky heirloom imbued with family history. I treasure these moments of discord, when the silly and the strange intrude upon the beautiful. That, to me, is Christmas: the Hallelujah chorus interrupted by a drunken hiccup. These elves were that hiccup.

In order to support each candlestick, the elf’s jolly pom-pom hat was wrapped around one side of the stick, and half a face was curled around the other. The juxtaposition of the elves’ cheery, primary-school colours with the mutilated heads charmed me. I couldn’t help but imagine them as the world’s most resilient druids, assembled in a circle. Or tiny, Technicolor victims of the Red Queen’s laser grid.

I am quick to form immoderate, consuming fancies. I must purchase these, I thought. But for whom?

Of course, there was only one answer.

I have a history of giving weird, ugly gifts to my sister, including but not limited to a one-inch square, cherry-red, enamelled box covered in garish porcelain roses, and a hideously orange decorative plate featuring a plump chef riding a bicycle. But these sliced-faced elves, I suspected, would be my finest moment.

Weirdness is my love language. I text my best friend horror stories about a live-action Precious Moments film to make her laugh; when my cats get hyper, I chase them around the house, flailing and chirping at them and sometimes even getting down on all fours; to lull my partner to sleep, I once spun an elaborate tale of how I would slowly replace him, All-About-Eve-style, with a miniature horse, also named Alex. And as I love my sister, I truly believe there is no better use to which my time or money can be put than amusing her.

My original plan was to break into her house and fill it with cheerfully horrible elves. But when I relayed this plan to my partner with a slightly manic glee, he was skeptical. “Your sister lives a five-hour train ride away. In a basement apartment. The basement of a house belonging to a sweet older lady, right? So your plan, then, is to…hop a train and break into an old woman’s home?”

This, I conceded, was all true. Perhaps the prank’s method of delivery would have to change, but the integrity of the prank must remain! The fate of these elves could not be undone by mere practicalities.

I decided to mail them to my sister anonymously.

After extracting a promise from the company’s customer service representative that I could send packages anonymously, all that remained was deciding on the exact number of elves I should send. After viewing the hundred-odd dollars I would be spending in elves and elf-related import duties, I deemed my initial estimate of 25 elves over-enthusiastic. I recalibrated to 6 for my sister and 6 for me.

Yes, by this time, my obsession with the elves had ripened like a sugar plum. I had grown attached to them. It was not enough to send them to my sister; I too, must posses them. So I placed my two orders – sending one to my apartment, and one to my parents’ place, where I knew my sister would be – and again called the customer service desk, my sister’s order number in hand, to impress upon them the paramount importance of my anonymity. With nary a hint of judgment, the woman working there assured me that my secret was safe.

Then I waited. You know that feeling you have as a child playing hide-and-seek, when you are hiding in a cupboard or behind a door and the person seeking you is just around the corner but cannot yet see you? You know that high-pitched “heeeeeEEEEEEE” that threatens to bubble and burst from between your teeth? That feeling was my life, for two torturous weeks.

I arrived home one night to find a package lying in front of my door. I leaned down to pick it up and made a thrilling, unexpected discovery: the elves were enormously heavy. After lugging them inside, I referred back to the original order page and my eyes caught a detail they had previously missed: the elves were made of solid lead. At this point my glee reached a fever pitch: I had mailed my sister almost ten pounds of mutilated leaden elf.

As my parents and sister describe it, on that same wet, snowy night, my father found the package waiting on the doorstep. When my sister arrived home a few days later, he casually mentioned that he had left a package in her room. She did not recognize the name of the company and said she hadn’t ordered anything, yet the box had her name and address on it. At a loss for anything else to do, she opened it.

This did not greatly clarify matters. My sister slowly unwrapped what seemed to be an unending parade of hideous – and heavy – elves. “I didn’t buy these,” she said. “Who bought these for me? No one who knows me would buy these for me.” Au contraire, ma soeur. Au contraire.

Our mother, who possesses the Christmas sprit of Linus, a post-Clarence-Oddbody George Bailey, and all the Whos down in Whoville combined, was greatly distressed. She believed the elves to be someone else’s Christmas gift, accidentally delivered to the wrong address. It wasn’t right! Just because they weren’t to our taste didn’t mean someone else wouldn’t love them! This person’s Christmas was ruined!

So my family attempted to track down the elves’ rightful owner. This search was made more baffling due to the fact that my sister has a very distinctive name, an Irish first name that is very, very rarely paired with our Spanish surname. My family looked for people with the same name in their surrounding area, with predictably no success. They looked up the “return to sender” address (the distribution centre) and found nothing of use. Finally it dawned on them to call the company, explain the situation, and see if it could identify the sender.

“Well, do you know a Madeline Rodriguez in Ottawa?” a company representative asked.

My sister immediately called me at work. “Maddie! Did you mail me a bunch of creepy elves?”

I could only cackle in reply.

“You didn’t buy these for me…seriously, did you?”

I cackled all the harder.

Eventually I managed to choke out how great the elves were, and after a moment my sister concurred and started cackling herself. And I truly believe that this, more than any accident of birth or genetics, is why we are sisters.

My sister spent last Christmas in France, finishing up her exchange semester. I very seriously considered mailing her one of the elves for Christmas; only the memory of parting with a host of cherished if cheaply bought items to make weight upon my return from my own semester abroad convinced me otherwise. The elf was too heavy. And the elf could not be lost. The elf was too precious.

Instead, I sent her a series of photos of myself posing with my elves, so she could remember the broad, special range of emotions they inspired in us.

This Christmas my sister will be home with my parents, and I am certain the elves will find their rightful place of pride amidst the decorations, luridly and ludicrously interrupting the more tasteful festivities favored by our family. I hope they will, over the years, become a treasured family favourite; an heirloom worthy of the time, effort, and emotional energy I poured into them, and a reminder of how much I care. At every family holiday, the elves will serve as proof of my weird, sisterly love. 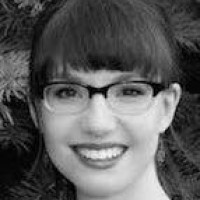 Maddie Rodriguez is an Ottawa-based freelance writer and a provider of decadent lifestyles for shameless felines. Follow her @maddiemuses.