The Gradual Devolution of My Goals as an English Teacher

Riane Konc’s previous work for The Toast can be found here.

My students will learn to lose and then find themselves again through the existential questions of great literature. Even the most reluctant readers will discover that their closest confidantes and most intimate lovers have been waiting for them in the pages of a book. After a class discussion about Romeo and Juliet versus West Side Story, students from different socioeconomic classes will look each other in the eyes and give a brief nod of understanding. The Kid Who Everyone Thought Was Bad News will perform Sonnet 116 over a sample of “Dirt Off Your Shoulder” to a standing ovation on the last day of school, and when he’s done, the whole class will leap upon their desks and address me as O Captain, My Captain, and also none of them will ever type u instead of you in a text message again.

Okay, well, I don’t expect every student to be Harold Bloom. I mean, how many ADULTS do you know who can fully parse “The Waste Land”? I’m not looking for a full textual analysis here. Maybe one student will follow the way that World War I haunts the narrator; maybe one will pick up on the theme of existential decay; maybe another will follow the parallels between Eliot’s poem and Weston’s From Ritual to Romance. I actually like it better that way, each of them poring over bits of the poem and teasing out individual meanings, then bringing what they’ve mined back to class to share. The important thing is that they figure it out on their own.

It’s best to work through dense poems like this in class. Although several of my students did point out that April, in the poem, was symbolic of spring, which I thought was a good start. Also I think they really connected with the cruelty of the spring, because did you know the school makes them take the SAT the same month as prom AND the senior class trip, which is totally oppression? — as Chloe mentioned.

Before I blow their minds with the poetry = rap connection, we may have to have a little class discussion about what “classic rap” is, and whether the breakdown in “Shake It Off” by Taylor Swift is that. Also not sure if these kids really think Jay-Z is famous for being Beyoncé’s husband, or if they’re just messing with me. Either way, we’ll table the poetry for now. They’ll be too busy soaking up the ORIGINAL young adult drama: Romeo and Juliet! Take that, Edward and Bella, that’s what they’ll be saying.

Shakespeare’s plays were meant to be PERFORMED, not read, which was another really good point second period brought up. I don’t even mind playing all the parts, because it’s important to teach to audio learners in my class, which they reminded me they all are.

The 1968 film adaptation of Romeo and Juliet is probably just as good as reading the play in class. I’m not a trained actress here! As a good teacher, shouldn’t I want my students to make connections between text and media? And it’s so important to be exposed to classic film. I mean, Franco Zeffirelli!

Of course, Baz Luhrmann is definitely a classic too, maybe even more of a classic. Plus the kids were right, the Zefferilli adaptation was janky and, I think, ratchet? I’m actually really excited about the way they’re exercising critical thinking skills, not afraid to go after the classics! I especially liked fourth period’s feminist critique that Leo was a way hotter Romeo than that old dude.

Sure, why not, let’s watch the 2013 version too. Damien Lewis is in it and we can stare at his creepy-ass small mouth.

You know what, IS there really so much that depends upon a red wheelbarrow glazed with rain water? Even taking into account the white chickens?

Rachel’s essay comparing all three Romeo and Juliet movies made some really unexpected–and I think exciting–points, such as, “why was there a fish tank” and “if i lived in cali i don’t think i would be in such a bad mood?” I’m really interested to hear about her choice to use abbreviations like “TL;DR” in an academic paper. A sort of parallel with the movie, in essence “modernizing” her speech in the same way the Luhrmann “modernized” a classic text? Maybe a commentary on how if Romeo hadn’t been in such a hurry–if he hadn’t, in essence, bespoke a “TL;DR” on Juliet’s coma–their love might have survived? Ah, I’m giddy!

Okay, so the articles she was quoting really were too long and so she didn’t read them. Also “wtf” does not, it turns out, mean “When Tylbat falls,” and “fml” does not mean “Forget ‘Montague!’ Live!” so I may need to revisit some of her points.

Really looking forward to hearing how the kids will make connections between The Red Pony and their own lives. What emblem of childhood have THEY lost? Could be grandmothers, could be baby teeth, could be…innocence? Also that book is like 13 pages long so we should be good.

A lot of them said that the dead pony symbolized that…they’ve had horses who died. Thought this was maybe cool slang–maybe pony means innocence?–but no, actual ponies. Had no idea so many of these kids had ponies. Where are they keeping these ponies?

Starting to really chew on Brayden’s point from yesterday: on the one hand, the futility of the American Dream. On the other hand, his friend did a really funny cover of “Let It Go” and went on Ellen and she gave him an Xbox so maybe sometimes stuff just works out.

Kids ACTUALLY unclear about Osama versus Obama, not making rhetorical critique or satirizing the hyperbolic and alarmist media culture. Good to know.

Maybe before the end of the year, I can get my students to stop saying “I could care less” when they mean “I couldn’t care less.” What if they said that in a job interview? English has real-world implications.

That was really ambitious. Maybe I can just get them to stop saying “for all intensive purposes.” That’s going to get them punched someday. Maybe by me.

Honestly, if you say it fast enough, it’s impossible tell that you’re not actually saying “for all intents and purposes,” so what’s the point. But I’ll bet my teaching license I can get them to stop saying “literally” when they mean “figuratively” before the year’s up!

You know, language really does evolve. Who cares if you use “literally” the wrong way if you’re still basically a good person? It’s like I’ve always said: if I can just help my students become basically good people, then I’ll have succeeded.

Wait, I think what I actually said was that if I can help JUST ONE student become basically a good person, then I’ll have done my job. Just the one student.

Maybe I can help just one student become a marginally better person. Or not even necessarily become a better person. If I can just take a basic, standard child and not fuck him up in any large or noticeable way, then–and I don’t want to get sentimental here–but that, right there? That’s the whole reason I got into teaching in the first place.

What if I only drank on the weekend?

Okay, I can drink on weekdays, but not in the parking lot.

Okay, not in the teachers’ parking lot. 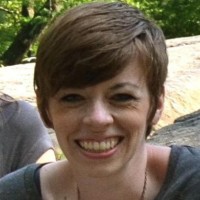 Riane Konc is a freelance writer living in the Midwest with two cats, a husband, and a daughter.