No, We Won’t Sandwich the Bride: On Handling Gay Tokenism

My boyfriend, Danny, and I were dancing at a bar in downtown Boston on a recent Saturday night — my hands on his waist, his draped over my shoulders — when I noticed a woman, a 20-something brunette, approaching us. Judging by the giddy look on her face, I knew what was coming.

“I just wanted to say that you guys are so cute,” she shouted over the loud music, out of breath after pushing her way through a sea of straight couples to reach us.

She placed her hand on Danny’s shoulder and grinned. I wasn’t sure if this was part of the act, or if she actually needed to steady herself. She was tipsy and struggling to walk in her black stilettos. We thanked her for the compliment and smiled awkwardly until she scurried back to her friends, looking pleased with herself, as if she had fulfilled her good deed for the month. Her group of seven was a rowdy bachelorette party, decked out in cocktail dresses, feather boas, and tiaras.

I had just finished telling a friend beside me about our newest fan when I noticed she had already returned and was leaning in to Danny’s ear. He looked wildly uncomfortable. “My friend is getting married and we’re having a bachelorette party,” she said, pointing across the dance floor. “Would you guys sandwich the bride?”

I checked to see if there was a neon sign above our heads flashing: LIVE GAYS. There wasn’t. When I turned back, Danny was politely declining the offer, explaining that we didn’t want to lose our friends in the crowd. Again, she scurried back to her own group, this time as the bearer of bad news.

“Guys, they said no,” I imagine she told them, prompting a harmony of disappointed awwws. Worse, I imagine the conversation that led to her request went something like: “Guys, I just met the cutest gay couple over there.” (She most likely said “met” — even though, in reality, she didn’t even introduce herself — because, for some people, knowing a gay couple is a little bit like knowing royalty.) “I have the best idea: I bet they would grind on our bride. They love that kind of thing! I’ll go ask!”

Situations like this arise nearly everywhere — on the street, on public transportation, at parties — so I shouldn’t have been surprised when it occurred there, at a bar that, according to Google, is ranked one of the top 25 “douchiest” in Boston. That’s no easy feat in a city where sports fans and frat bros run rampant through the streets, but the bar more than lived up to its “douchey” reputation. It was a multi-level establishment: the first level was both a tackily decorated sports bar and a sticky dance floor, and the basement was a country night, complete with a live band and lots of people drunkenly bumping into support beams. Scanning the room, it was evident that we were the only gay couple there. We were surrounded by women in short dresses, guys in oversized button-downs, a couple sloppily making out against a wall, and one person who actually did have the best idea: he was wearing earplugs.

After the woman left, I rolled my eyes at Danny, brushing off the frustration that, yet again, we were spotted by the gay paparazzi. We eventually had a good laugh about it as the night continued, the kind of laugh we always share when this happens — when strangers stare at or comment when we display any kind of affection in public.

A couple weeks later, while walking to my apartment hand-in-hand after getting ice cream, we noticed two teenaged girls sitting on a stoop across from my building. Their awestruck expressions made me wonder if Taylor Swift was behind us. We exchanged hellos, but couldn’t escape without a quick analysis of our relationship.

“I’ve always wanted a gay best friend!” is something Danny and I have both been told after coming out to women friends. Of course, it’s not always women who react this way, or feel the need to pipe up when they see an exotic gay couple in its natural habitat; once, when he and I were holding hands on our way to grab lunch, a 40-something man spotted us across the busy sidewalk. “Right on, boys!” he shouted. I glanced over at him, mostly to see if he was also wearing a tie-dyed shirt and flashing a peace sign (he wasn’t), nodded, and felt my face go red as I kept walking.

On some level, I appreciate any genuine support I receive for being open about my sexuality and my relationship. It’s something I dreamt of constantly when I was younger, feeling trapped and lonely and believing my only option was to live a lie. Attending Catholic school merely reinforced the idea that my “lifestyle” was evil. But what I’ve realized is that there’s a fine line between being supportive and being patronizing.

When strangers approach Danny and me on the street to say, “You guys are just so cute,” or “You’re both adorable,” it’s hard not to sense an air of condescension. We are spoken to like toddlers or puppies. If I were to type these comments into Google, it would translate to: “I don’t have much experience with gay people, so I’ll overcompensate and shout at you in public!” Or perhaps, “I need to give you my approval, but mostly I need to flaunt how progressive I think I am!” Or, “Lady Gaga! Tank tops!! Glitter!!!”

The patronizing remarks are a different form of lessening than the negativity I’ve experienced — the snickering, the name-calling, the gossiping. Receiving comments about how cute we are will always trump hatred, but they still embarrass me and make me feel isolated. I’m accepted, but am still treated as unusual, as a spectacle. It’s something I feared growing up and that forced me to track all of my mannerisms, ensuring nothing I did appeared “too gay.”

A genuine compliment arises occasionally, like the polite and friendly waitress at the French restaurant we went to for my 23rd birthday last year. “You guys look great together,” she said as she poured us two glasses of pinot noir. It wasn’t a comment on our homosexuality. It was a simple observation, free of implication or superiority. There was no underlying tone, only kindness. The waitress’ manner gave me a feeling of comfort and security that I seek and hope for no matter where I go, a feeling that I sometimes get when no comments are made at all. That is when I feel most accepted — when our relationship doesn’t elicit any remarks, and when we aren’t recruited as entertainment for a bachelorette party. Danny and I aren’t dating to take our place as “Cutest Couple Ever” in the Guinness Book of World Records or to make a political statement. We’re a couple expressing our love in ways that all couples do.

I do see that, in a sense, our relationship could be considered a statement. My mom once told me that I might be helping someone else feel braver or more comfortable with who they are when I walk hand-in-hand with my boyfriend in public. She’s an authority on that subject. My dad has multiple sclerosis, which has severely impaired his vision, and forces him to use a walker or a wheelchair when he leaves the house. It’s difficult for him to get anywhere — a restaurant, the movie theater, the back porch. I’ve witnessed countless gawkers who whisper when he struggles or falls in public. My mom always takes his hand, or the handles of the wheelchair, and pushes forward. She has taught me to believe in a love that triumphs despite the stares, the unsolicited comments, and the veiled acceptance. She has taught me to believe in impossible love.

The other day, as Danny and I made our way to his apartment after a stroll down Newbury Street, we passed a young man and woman, both in their 20s, who glanced at us a few times as we approached them. Here we go, I thought, assuming one of them would make some kind of comment, and braced myself.

Instead, the man spoke up, and confirmed my mom’s wisdom. He reminded me why I feel the fear and the embarrassment — and express my love anyway.

“I should hold my boyfriend’s hand like that,” he said. “Props to you.” 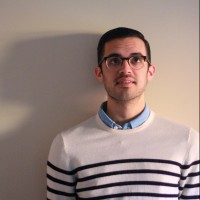 Tom Vellner is a writer and editor in Boston. According to the manager at his local bagel shop, he is also a Clark Kent lookalike. Follow Tom on Twitter.