Yana Tallon-Hicks’s previous work for The Toast can be found here.

The first time I set foot in San Francisco’s only lesbian bar, The Lexington Club, I felt the same way about it as I did about the more experienced, pierced, tattooed, swagalicious queers who made up the Lex’s regular crowd – I couldn’t tell if I wanted to fuck them or be them. As a high-femme, green-on-the-scene, overly academic babyqueer who had just turned 21, had sex with her first girl, and moved to San Francisco without ever having been before, that summer I often confused idolization for lust. The Lexington Club, in all its understated, cool, and undeniably queer ways, simply put four bright-red walls around this feeling I had and placed it at my feet.

This was 2007. I had moved to San Francisco on the dime of a grant I was given to work with sex-positive pioneer Carol Queen at her Center for Sex and Culture. By fall I was hooked, and decided to stay through my fall semester with the goal of moving to San Francisco permanently post-graduation. I had submerged myself in San Francisco’s queer culture, splitting my time between foaming lattes for the lesbians of Dolores Park and selling sex toys to queers of all varieties at Good Vibrations. By night I wrote my undergraduate senior thesis, long-windedly titled “‘San Francisco’s Only Dyke Bar’: an ethnographic look at the social construction of queer space and identities at The Lexington Club.”

Though I had originally set out to write a thesis about peer-based sex education, like most liberal arts degree candidates, my thesis quickly became an identity project. And nowhere was my identity thrown into question more than at The Lex. One of the first conversations I had about queer identity at The Lex was with a similarly-femme friend of mine. Exasperated at wistfully scoping out hot butches and bois from one of The Lex’s sticky bar tables, I told her I was going to write “QUEER” in Sharpie on our foreheads as a last-ditch attempt at making ourselves visible to the queer community we so badly wanted to be part of/sleep with/learn the secrets of. We eyed fellow femmes in the bar, attempting to put our fingers on the signifiers that allowed us to read them as queer despite their long hair, bright lipstick, and girly dresses. We wondered out loud how we, too, could simultaneously ooze queerness and femmeness in the ways the incredibly sexy, incredibly femmey, and yet incredibly visibly queer Lexington bartenders did.

As I began to speak to people about sexuality, gender, and “the queer scene” at The Lexington for my thesis, personal insecurities of fitting into this bar’s idea of who was “queer enough” to belong in this space – in terms of body, gender, sexuality and experience – came to the surface in almost every interview. Themes of visibility and invisibility at The Lexington became paramount in mine and my interviewees’ experiences. Critiques of and reliance on visual codes of queerness and strategies – of when and what to reveal about oneself in the context of The Lex – slowly morphed into a 120-page thesis. Femme, butch, trans, genderqueer, however the queer patrons of The Lexington identified, we all had something in common when it came to our inexplicable love affair with this bar: we wanted in. And we wanted to be seen.

Owner Lila Thirkield transformed the formerly heterosexual bar into a lesbian bar in 1997 because, she said, “There was no lesbian bar in San Francisco at the time and there hadn’t been for seven years. It seemed odd and crazy and it was what I wanted. It was where I wanted to hang out.” Located off 19th and Valencia (on Lexington Street, of course) in the Mission District, The Lex is a small space. A pinball machine, jukebox and pool table take up most of the space that isn’t otherwise occupied by cramped tables and chairs. Two bathrooms are in the back, brightly painted and perfect for quickies and make-outs. Dimly lit candles and the red walls give the space an intimate, sexy feel, while the no-frills interior lends The Lex its beloved down-home dive-bar ambiance. The reputation of The Lex often precedes its understated interior, and the small space can barely contain what this bar is known to be. As Lila jokingly explained to me in 2007, “It’s like a fucking postage stamp – it’s really small. People come here and they’re like ‘Oh my god, this is The Lexington Club?’”

The Lex’s inconspicuous, underwhelming physical space is nostalgic of the pioneering safe space of the 1950s and ’60s lesbian bar, when queer spaces intentionally existed under the radar for safety reasons – protected by the tight-knit community, unspoken social rules, and wariness of outsiders. My own and other newcomers’ awkward attempts to become “part of The Lex’s queer scene” made it obvious that these traditions continued to reverberate through The Lex in 2007, as they do in most communities accustomed to being targets of hate and violence.

But these are hardly the only ways in which The Lex served a historical purpose in the 2000s. The Lexington Club taught us how to be good at being queer.

If the butch/femme duality didn’t completely originate in the bars of the ’50s and ’60s, it definitely thrived there in the ways it was rigidly reproduced as a social norm of sexual interaction, personal dress, and comportment. The writings of queer academic Sue Ellen Case (1993) reflect the social centrality of the historic butch/femme couple when she says that “the bars were often abuzz with the discussion of who was or was not a butch or femme, and how good they were at the role.”[1] In the ’50s and ’60s, the importance of claiming a butch or femme role and to maintain the butch/femme dynamic in one’s social and sexual life were paramount in order to be accepted into the bar community and the social safety it offered. As Sally Munt (1998) found in her studies of lesbian identity and cultural spaces, “butch and femme are rituals for which there are acknowledged rites of passage. For butches, ‘my first tie/dildo/Doc Martens’ are symbols marking moments of transgression into lesbian self. The mechanics of recognition are integral to all subcultures, and within butch culture the smallest sign – for example, short, clean fingernails – can connote intense meanings.”[2]

Though present-day queer identities have multiplied in ways that have blasted apart “butch” and “femme” as the bookends of queer identity and sexual/social roles, for nearly 20 years The Lex operated in much the same way the lesbian bar of the ’50s and ’60s did: it gave us a safe space to learn from each other about what it meant to be queer. As reflected in Case’s and Munt’s writings on 1950s and ’60s lesbian bar culture, the queer social scene housed by The Lex communicated its own modern-day rites of queer passage, checked our transgressions, and taught us the signs and signifiers that connoted queer meanings. In 2007, babyqueer’s “first ‘tie/dildo/Doc Martens’” looked more like babyqueer’s first dirty bandana tied around the neck/softpack/neon Reebok hightops, but the subtle, social queer-to-queer mentoring remained the same. Through rubbing up on each other on the dance floor and in the bathrooms, through checking each other out through $1 PBR-goggles by the light of the pinball machine, through admiring the confident hair-toss of a femme bartender, we were all teaching and learning about what it meant to be femme, butch, trans, genderqueer, queer, and otherwise, simply by being together in our postage stamp called The Lex.

The Lex facilitated a special queer-to-queer construction of queerness and of self. We went to The Lexington not necessarily because we felt unsafe being out on the streets of queer San Francisco as we might have in the 1950s, but because the bright-red walls of the bar gave us a safe container where we could figure it all out.

My first experience at The Lex was in 2007. This was before my friends and I watched Obama get elected on The Lex’s TV screen. This was before I met my own more-experienced, tattooed, pierced, swagalicious queer and made her my girlfriend, before I was introduced to her friends at The Lexington, and before, years later, over drinks at The Lexington, I told her friends I was going to propose to her. This was before our friend gathered the guts to ask out that confident, hair-tossing, femme Lexington bartender he’d been pining over for months, before they ended up having a commitment ceremony of their own just this past summer. This was also before the startling rate of queer teen suicides made national news. Before Tammy Baldwin became the first openly lesbian U.S. Senator. And before Laverne Cox was on the cover of Time magazine.

Like any relationship that’s run its course, maybe The Lex isn’t necessarily helping us grow anymore. Maybe getting pancakes across the street at queer-owned Radish has come to feel just as radical and safe-space-making as the lesbian bar of the ’50s and ’60s used to. Instead of needing to retreat into that beautiful dark corner of 19th and Lexington, we can just go to our local brunch spot to see paintings of shirtless trans men, just stroll into our local queer-owned sex toy store to figure out which dildo should be our first, or just go into any old bar and pick up a hot woman. Perhaps, in the winter of 2015, we’ve finally outgrown our postage stamp bar, and are expanding the boundaries around the space we consider safe – friendly and chock-full of hot queers who make us confused about whether we want to fuck them or be them.

This April, The Lexington Club is expected to close its doors for good. Dear Lexington, the 1950s butch to my 2007 femme, who showed me what it was to be queer, who made me want to learn to be a visible femme because you just made it look so fucking appealing – consider this both a love letter and bittersweet goodbye. As with many of our first queer loves, we may not think we need you anymore, but I’m not so convinced. We love you; we’ll miss you; we thank you.

You can read also read Yana Tallon-Hicks’s undergraduate thesis about The Lexington Club in the Hampshire College library or in Hampshire’s online archives. 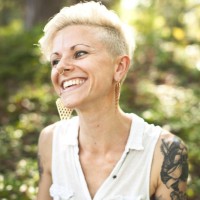 Yana Tallon-Hicks studies Marriage & Family Therapy at Antioch University in the hopes of becoming the best damn queer sex therapist in the land. Yana received her undergrad in queer studies & sex education, and her written sexpertise has appeared in Curve, Bitch, Autostraddle.com, and her sex column in the Valley Advocate.