If The Velociraptor From Jurassic Park Were Your Girlfriend

Previously in this series: If Sarah Polley Were Your Girlfriend

If the velociraptor from Jurassic Park were your girlfriend, you would have the weirdest meet-cute.

You’re a handler on Muldoon’s staff. Handlers are classified as Essential Personnel so when the evacuation call comes, you stay. Your team splits up to put out fires around the island, but you’re the only one who returns to the visitors’ center. You see two raptors swarming with a T-Rex not far behind, so you hide. You enter the building and give yourself an hour in one of the ground floor utility closets while the animal battle in the lobby handles itself. The screeching of the raptors stops; the building is silent. You tell yourself that, thanks to the sheer size of animals you’re dealing with, their movements are easier to track than what you’re used to handling.

You almost believe that, but then you see her. There’s two raptors lying on the lobby floor, but you know it’s her. She’s bleeding from the neck and shoulder, one bright eye staring right at you. You know it’s her because she watches you and blinks, deliberate. She moves her neck, bares the wound to you, and cries out. She’s playing you, obviously, because you’re a Lunchables in Hammond-mandated khakis that’s wandered right into her jaws. You could run and let the last of them—of these—you could let her die. But it’s too late. You won’t let her die. You can’t let her die. She sees you. She really sees you.

If the velociraptor from Jurassic Park were your girlfriend, you would awkwardly yell at her WAIT HERE. Her expression says you’re an idiot, like you didn’t know already. You step around her and head to the dining room and kitchen. It looks like people were here and eating earlier: there’s ice cream, salads, lukewarm steaks, chicken, fish, chicken fingers for the kids. You grab the steak dish and rip a tablecloth off a table.

The sound of crashing plates startled her in the lobby. She cries out again, having twisted her neck all sorts of ways to watch your approach. You lay the steak dish in front of her, then start to roll up the tablecloth into a long strip to bind her shoulder.

She looks at you and the cloth, then scares the hell out of you: she jumps to her feet. Upright, she’s more than a head taller than you, but she leans forward into her usual posture. She bends down and, with some pain, scoops up several steaks into her mouth. She looks at you. You throw the makeshift bandage across her back and she stands still as you bind the wound. You take your time because she’ll probably kill you when you finish.

You finish and she leans down to eat again. The steaks, not you. You look around the lobby, wondering what the hell you’re going to do to get out of here, and then she gets your attention. A nudge on your arm, a nod down at the dish. She left you two steaks.

If the velociraptor from Jurassic Park were your girlfriend, she would accompany you to the control room. Everyone left their terminals on and their email open, so you snoop freely while she watches. When you take too long, she moves to the other desks and starts rummaging for snacks. Her tail brushes against your shoulder, a tensile, deliberate brush. It lingers, then it’s gone. She’s pulling drawers out onto the floor with the claw on her good side.

Rec’d call in NY office last week re: Hammond’s scientists and that handsome asshole in the leather jacket. Gov’t holding them indefinitely until they spill about the island. Hammond told them to call us NOT the Embassy. Can’t extract until we have the full story. CALL ME.

If the velociraptor from Jurassic Park were your girlfriend, she would throw the drawer of a filing cabinet at the snack machine in the corridor. You rush out to see what had happened and find her building a pile of snacks on the floor. You tear open a Reese’s and, in one of those moments where you know you’ve lost it, you thank her with a touch to her shoulder. The wounded one. She nudges you back and leans in to smell the Reese’s. She hates it.

If the velociraptor from Jurassic Park were your girlfriend, she would stand guard at the kitchen entrance while you used their giant sink to wash your only pair of underwear and these khakis. The gift store has all the t-shirts and caps you could ever need, but no underwear. There’s a lot here you don’t want to unpack: when you’re going to give up on underwear; when you’ll try to get a boat to the mainland; whether they’ll let you return to your apartment there; whether they’ll detain you, indefinitely; whether your fate ultimately rests on coming right back here so you can help authorities execute every dinosaur on the island.

You look over your shoulder and wonder what she can sense that you can’t. You wonder if that’s how her pack worked, if they looked out for each other like this. You wonder if she knows she’s the last of her kind.

You wonder if she’s the last of her kind.

If the velociraptor from Jurassic Park were your girlfriend, you would start taking trips outside the visitors’ center with her. You stepped out ahead of her, but the tip of her tail wound around your waist and you knew what she meant. Behind me.

Every day, you would go a little deeper into the jungle. You marveled at how she moved without a sound. When her tail did brush against something, the sound blended in with the faint breeze moving among the leaves. You stayed close. You followed.

If the velociraptor from Jurassic Park were your girlfriend, the two of you would sleep in the break room of the visitors’ center. You wondered from that first day, that first night, if raptors slept, and the answer was that she did.

She walked into the break room and flipped a table, then pushed it towards the door. You watched her fold her elegant body behind the table so that most of her was hidden. Christ, how did she learn this life for herself?

Her head peeked up and she looked right at you. So. This is happening.

You walk around the table and sit with your back against one of the staff lockers, your arms folded over your chest. Before you can close your eyes, her tail brushes against you. She clicks at you. She’s made a space for you, where you can curl up against her front, both of you hidden behind the table. She clicks at you again, so you go over on hands and knees, curl up in front of her.

It works… well. Her head rests above yours, her legs behind yours, her tail curled around both of you, her wrist and those claws, those claws, resting against your stomach. You fold one arm under your head and rest one hand on her wrist, your fingers brushing those claws.

If the velociraptor from Jurassic Park were your girlfriend, you would go with her into the wild. 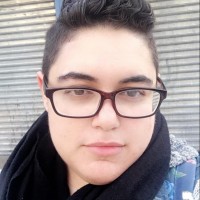 Michelle Vider lives in Philadelphia. She has a master's degree in English, but she's feeling much better, thank you. She tweets here.