THE GRUMPY IS IN

Grumpy Cat takes over Dr. Drew’s practice at the Pasadena Recovery Center, treating a group of troubled stars who are looking for hope, redemption, and just a little bit of quality snuggle-time. Grumpy’s severe demeanor certainly inspires her patients’ confidence, but will her unquenchable affection for cruel memes adversely influence her therapeutic efficacy? According to a lawsuit filed by an incensed Shia LaBeouf after this show wrapped, the answer would be yes.

OLIVIA AND MEREDITH—ON OUR OWN

In this docu-dramedy, Scottish folds Olivia Benson and Meredith Grey move out of Taylor Swift’s shadow and into their very own historic West Village townhouse, learning some inspiring life lessons along the way. Watch as the gals try to unsuccessfully convey to a bouncer at a NYFW afterparty that Karlie Kloss has put them on the list; as Olivia attempts to master her near-debilitating fear of getting in her carrier; and as the duo braves a playdate with Lena Dunham’s rescue mutt, Lamby (with some hilarious—and unexpectedly moving!—results).

Time to get off that couch, get your paws off those tuna treats and start batting around some string because you, cat, are way too fat! Each week, one rotund feline will be pushed to the limit physically—and mentally!—to become his very best self (Turkish van Porkchop’s feet finally catch up with his stomach, while Abyssinian Mr. Pumpernickel goes down two whole carrier sizes!).

WELL I’LL BE A KITTY’S UNCLE!

The luxurious lives of the San Fernando Valley’s most sensual felines. Whether flaunting their fuzzy curves by the pool, riding in the Range Rover while flexing their Hermès-love-bangled paws to the latest E.D.M. banger or modeling the slinkiest Herve Leger bandage thundershirt, these cats are the envy of every Joe tabby. Degrassi alum and current Calabasas resident Drake guest stars.

A WHISKER IN TIME

Bad-boy mentalist Cris Angel makes his comeback in this supernatural twist on “Unsolved Mysteries.” The catch? Rebecca the Maine coon, Angel’s partner in crime—nicknamed “the brain”—is only awake for an average of fifteen minutes a day, and those are spent tangled up in Angel’s unbearably heavy crucifix-adorned chains. Will the pair be able to triumph over the circumstances and crack the case as the clock ticks?

What would it feel like to live like a cat? A dozen young professionals shed their differences in their quest to find out—and find love. The diverse group—standouts include flirty restaurateur Emilee, 25, hunky farmer-turned-commodities-trader Brendin, 29, and rebellious Harley Davidson detailer Jarrett, 26—is sequestered on an idyllic Malaysian island. Allowed to communicate only in meows, purrs and hisses, they will soon discover it’s not what you say that counts: it’s what you look like while wearing nothing but outsize papier-mâché paws.

Illustrator: Matt Lubchansky makes comics and is the editorial assistant at The Nib. He’s on Twitter, like everyone else. 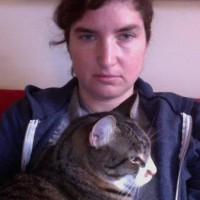 Naomi Fry lives in Brooklyn and has written for The London Review of Books, The New York Times Book Review, The New Republic, and n+1, among other publications. She is the preeminent Israeli-American cat humorist of her generation.