If Actors In Famous Movie Scenes Were Costumed From My Wardrobe

Tony runs through the alley, calling for Maria. She appears, and he turns towards her delicate voice.

Maria is perched on her fire escape wearing flannel drawstring pajama pants and an old Coldplay t-shirt. Tony makes his way towards her. If he’s disappointed, you couldn’t tell by his beaming smile. Wishing she had left her bra on until it was closer to bedtime, she decides to play this coyly.

Holly is still seated in the backseat of the taxicab. Paul holds the door. “You call yourself a free spirit, a wild thing, and you’re terrified somebody’s gonna stick you in a cage…”

The camera focuses on Holly, who is enveloped in an enormous puffy coat, staring intently while taking a quick, nervous drag from her cigarette. The shot is tight and direct, and the oversized puffy hood takes up more than half of the screen. Then — dramatically — Holly rests her head on the back of the seat, and the whole puffy hood bulges around her dainty features, making her appear as though she is, in fact, caged.

The fog is thick, the air is heavy, and Ilsa is grappling with the heartbreaking news that Rick won’t be getting on the plane with her after all. The camera carefully frames Ilsa’s face, and we see that her eyes are glistening with tears. She’s ready for travel in her gift-shop “Sun n’ Sand” Panama/fedora crossover hat with neon green ribbon.

The room is heavenly. A gentle breeze blows through the sheer curtains, causing them to billow around two slim figures.

“Is it really you?” Daisy coos to Nick. She is lounging in a pair of jeggings. The cap sleeves of her blouse are dusted with tiny silver sequins. Over time, more than a few of the sequins were bent in the wash, so now when they catch the sun just right, they wink little rays of light—like a beacon on the water.

Out of the corner of his eye, Nick also spots Jordan. She stretches fully, as if emerging from a cocoon. Jordan, as always, is the essence of leisure and sport in her full velour suit.

With a record-breaking number of costume changes, Cleopatra wears 65 different outfits throughout this 1963 movie. In one famous scene, Cleopatra rests atop her throne, wearing a beckoning grin. Her posture speaks to her authority and power. Her gaze is piercing, and she commands the respect of all in her gold bikini bathing suit top paired with a vaguely animal-print sarong. She is also wearing metallic gladiator sandals, because that’s from a similar time period, right?

How to Marry a Millionaire

Pola Debevoise sits in the window seat of an airplane. Her signature blonde bombshell hair is done up in rolling, voluminous curls. She wears a simple button-up shirt, a black blazer, and a lightweight scarf. “Well, you know what they say about girls who wear glasses?” she says, delivering the line with a breathy sigh to the gentleman seated next to her.

The man urges her to try them on, and Pola reluctantly agrees. She pulls the glasses out of her bag, unfolds them, and grips them on both sides. She hesitantly slips on the oval frames, made of purple-colored plastic. They are dull from scratches, a little crooked, and there’s a permanent smudge on the left lens. These are glasses meant for a Friday night at home with a pint of ice cream.

With a face that is usually nothing but stunning, Pola directs her attention to the man. “You’re crazy,” he says. His next line is, “You look better with them on.” But as he stares at the purple glasses, he has to gather the strength to say it.

The Wizard of Oz

Dorothy closes her eyes and clicks her sensible black combat boots together three times. “There’s no place like home.” 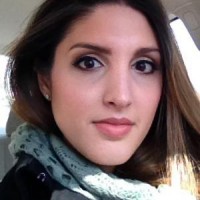 Meryl Cates is a freelance writer. She works in Manhattan and lives in Astoria.