For the crust:
Store-bought pre made crust; The Bartender is not a magician.

honey. or not. whatever. this ingredient is not strictly necessary

chives (or scallions or something like that)
basil (or not. put in herbs, don’t put in herbs, nothing is a rule)
tomatoes (see parenthetical above)
salt
cheese; The Bartender chopped up a couple sticks of string cheese.
cut up rhubarb, put in a cup and drizzle with honey. Let sit for however long until you get the strength to make the rest of the quiche.
mix eggs/milk/flour
chop or rip up the herbs and cut little tomatoes in half or bigger tomatoes in more bits
throw all that stuff and mix with salt and egg mixture.
line cheese on the bottom of crust, through some into the custard mixture
pour mixture into crust
float some cheese on the top. use more cheese.
cook at 375 for 40 minutes or until center is cooked.
EAT.
Now open thread like a quiche wind and then go make something sometime! 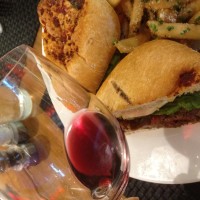