What has been going well?

The days are long and the work is shallow and the only piece of mine that went ‘viral’ this year was ’27 Kick-Ass Things You Learn When You Catch A Marlin’.

Though ’27 Kick-Ass Things You Learn When You Catch A Marlin’ was an unexpected triumph, Ernest isn’t working to the standard achieved by other BuzzFeed writers. ’18 Things You Only Know If You’re Ernest Hemingway’ is our lowest-performing piece of content since we launched nine years ago; 202 people have read it, and I know that three of these were Ernest on different devices. Only 612 have read ‘Buy My Novel For Whom The Bell Tolls’, and most of this traffic came from Japan as the result of a freak technical glitch. ’14 Hats I Wore While Writing A Farewell To Arms’ significantly underperformed, as did ’31 Lions I Still Really Need To Catch’ and the interactive quiz ‘Can You Guess Where Ernest Hemingway’s Pen Is?’. In retrospect I’m not sure why I commissioned these.

What has been going less well?

This job blights me like a sore tooth and our audience is vapid and and the majority of our content is vapid. (I do not include my contributions in this assessment.) Most of my pieces running to more than 16,000 words are decimated and they are stripped of their integrity and filled with infernal ‘Vines’.

I am told I ought to be more active on social media. I see no reason why these cretins ought to be allowed to read my writing for free.

Ernest still struggles to understand that our audience does not pay to read our website. He is confused whenever I remind him that we are not a print publication. He is frequently surly, hungover and verbally abusive, especially in morning meetings. It has not escaped my attention that he has reported to work drunk on dozens of occasions and that occasionally he simply lies under his desk for hours.

Ernest refuses to publish picture round-ups, claiming that they are beneath him and that they ‘dull the intellect’. When shown statistics on how well these pieces perform, he tends to make offensive comments about the ‘damn fools’ that write them.

How is the morale around you?

My fellow workers seem to be having no shortage of LOLs but I find this flippant atmosphere unconducive to fine writing. I wear headphones and listen to a recording of men cutting wood in a forest. The forest is wet and the men are fine workers.

The free ‘BuzzFeed’ coffee is a bonus, of course. Fortifies the spirit. Keeps the voices at bay.

Ernest regularly threatens to damage team morale, ignoring his colleagues in order to listen to his headphones. He does not realise that often the rest of the office is able to hear what he is listening to, because he has not plugged in his headphones correctly.

How do you feel you could you improve your work?

The responsibility lies not with me but with ‘BuzzFeed’. My work is strong and my hands write good words. When I pitch about my experiences hunting lions in Africa, I am told that a compendium of ‘cute baby lion pics’ would be ‘more likely to get 500k clicks’.

Ernest is pitching increasingly bleak pieces, most of which pertain to alcoholism, dead lions, or writing alone in a shed.

Is there anything the company can do to help you?

I should like a pay rise and a bigger chair and I should like my bouts of inebriation to pass unremarked upon.

For the benefit of both himself and the company, my advice is that Ernest’s contract be terminated forthwith. 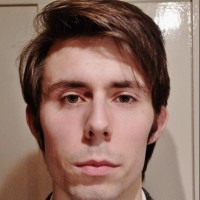 Ralph Jones, who looks remarkably like Rafael Nadal, is a comedy writer and journalist from London. He is part of sketch group The Awkward Silence and has written for titles including BuzzFeed, Vice, Esquire, and New Statesman.