If I Were Built: I’d Own Guns

By Andrew Palmer and Brian Platzer

If I were built, my partially wooded acreage would be a place of great tranquility. The woods would be a mixture of deciduous and coniferous–walnut, locust, oak, ash, maple, beech, spruce and white pine, primarily. Sunlight would dance on the forest floor. The call of thrush would echo through the trees. Bees would buzz. Brooks would gurgle. There would be bowers and dales and glens. Small mammals would scamper and frolic and I’d shoot them. I’d shoot them with my guns.

If I were built I’d invite my buddies over to my partially wooded acreage to kill defenseless animals with semi-automatic firearms. As we shot otters and woodchuck and left them to bleed into the damp earth I owned, we’d talk about women’s bodies and extreme fighting and the role of the federal government. My friends and I would all agree, if I were built, that the role of the federal government should be dramatically reduced. “They’re taking away our freedom,” one of us would say. “Man is free at the moment he wishes to be,” I’d say. “Voltaire,” I’d add as I aimed at a distant porcupine, but just as I pulled the trigger one of my friends would walk in front of me, and my bullet would enter the back of his neck and exit through his face, and my other friends and I would dump him in a nearby pond and promise never to tell anyone what happened. I’d have to live the rest of my life knowing I’d killed a man, if I were built.

Sometimes after that day, to let out pent-up guilt, I’d shoot inanimate objects with my guns—tree stumps or garbage cans or beer bottles or pound cakes. “Have fun,” my wife would say as I left the house, but I’d know she wouldn’t mean it, I’d know that what she was really saying was, “I don’t believe in the Second Amendment.”

My wife and I would have very different political views, if I were built. I’d believe in the dignity of human striving, while she’d believe in bureaucrats taking my money and giving it to lazy people, but that wouldn’t affect the health of our marriage, our marriage would be grounded in a mutual respect that included respect for each other’s politics, and also on animal lust. My wife wouldn’t be able to keep her hands off me, if I were built. She’d cut her fingernails sharp, like claws, and she’d run them down my chest and abdomen, taking bits of skin along with them, leaving trails of blood. And she wouldn’t stop at my abdomen, either, she’d run her fingernails over my thighs and genitalia, all the way down to my ankles. My body would be just dripping with blood. I’d let out of a scream of pain and desire. My wife would sink her teeth into my calf and I’d lose consciousness.

When I woke up I’d be somewhere deep in my woods. I’d be naked and scarred and everything would hurt. I’d badly want a drink, but there would be no water nearby. I’d crawl along the forest floor in the direction I hoped my house would be. Gunshots would ring out and I’d duck behind a tree. More gunshots, then silence for a minute or two. I’d say a prayer to myself, though I wouldn’t believe in God. But the moment I moved out from behind the tree I’d hear more gunshots, and much closer this time. “Don’t shoot,” I’d say, as loud as my parched throat would allow. “Please. Please, don’t kill me.” My wife would continue shooting, but I’d know that she wasn’t aiming at me, that this was all part of a game we liked to play, to turn each other on. “Give me one good reason why you deserve to live,” she’d say.

That night, after sex, my wife and I would sit on our patio drinking margaritas. We’d talk about nothing in particular—our grown children, our plans for the week, Renaissance faculty psychology. We’d watch the sun set over our woods. “Honey,” I’d say, still looking at the sky. “What is it, babe?” she’d say, turning toward me. “I’m just so grateful for everything I have,” I’d say, and I would be, if I were built. 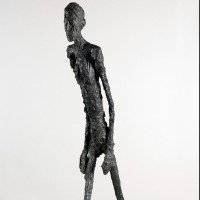 Andrew Palmer and Brian Platzer wonder what life would be like if they were muscular. Their work has appeared in The New Yorker, Salon, Slate, and elsewhere. Follow them on Twitter @ifiwerebuilt.