Start work tomorrow! E-mailed Olivia yesterday just to make sure everything was set.

Hope your weekend is going good! Looking forward to joining the P & A team. Just wanted to confirm that my start date is tomorrow—I imagine you want me in by 9? And it’s business casual, right?

That sounds like she’s mad, right? Ugh, she hates me already. I don’t know what to wear tomorrow, I hate everything I have. My interview was over the phone so I don’t know how dressy people get there. Maybe I’ll wear nice slacks and a button-down.

First day! I got there at 8 and no one was there. The door was locked so I sat on the hallway floor for about 25 minutes before this guy showed up. His name is Harrison and he’s SO hot but kinda full of himself. He told me to sit at this big conference table until Olivia got in. He was just like “Do not touch anything, do not let anyone through that door, do not let Liv see you cry,” and then he left again.

I don’t even know how long I sat there for—I texted my roommate and swished around Facebook for a bit and then finally Olivia arrived. She’s so pretty! There was this shrill lady trailing behind her, talking nonstop. Her name’s Abby (don’t remember her last name) and she seemed upset to see me there. When Olivia saw me she said, “Hi, nice to meet you,” and Abby was just like “Who’s she? What’s this? Liv, seriously? Another person?” and Olivia was like “Abby, she’s fine. She can handle this.”

And Abby did this really condescending smirk at me and looked me up and down and said “Gladiator in Old Navy.” What do you think that means? I was wearing H&M.

Anyway, Olivia gave me this quick tour. There’s this big bookshelf full of what looks like legal books, but they’re dusty and don’t look like they’ve ever been opened. The office is real swanky. And so dark! The lighting is bad, but the conference room has a lot of natural light (although there are a million cracks in the windows). My desk is pretty empty—I have this ancient Gateway desktop and a cup with like, one highlighter in it. Olivia said she had to leave for the afternoon but called over someone named Huck before she left. I guess he’s the IT guy?

Huck gave me a little tutorial on Microsoft Office that was basically, “This is how you print labels.” “This is how you do mail merge.” “This is how you schedule meetings in Outlook.” Huck seems weird. He has this strange, stage-whispery thing going on. He kinda gives me the creeps, but I feel like I’ll probably have some sort of weird sex dream about him eventually.

What else, what else? Oh, yeah! I went to the bathroom and there wasn’t any soap by the sink. Harrison’s desk is by the bathroom, so I walked by there on my way out. He was just staring into space, and I tried to ask him what to do about the soap.

Me: Hey, the soap dispenser is outta soap—is there someone we can call to fix that?

Me: Yeah…like, the building’s cleaning crew? To get some more?

Harrison: Do you know what we do here?

Harrison: We fix things. People who are on the edge of losing it all come to us. We’re not lawyers, we’re not PR. We’re gladiators in suits.

Me: Oh. Uh…should I just run out and buy a bottle of soap?

And then he didn’t say anything. He just looked at me and turned his chair around.

It’s been a rough few weeks. The work is really fast-paced and I can’t keep up. I feel like I barely know my co-workers. People seem to eat lunch at really random times, so I usually just eat at my desk and check my g-mail. (Also, NONE of them bring lunch from home. How can they afford that?) Everyone’s always really tense and they act like everything is the end of the world. Some guy named Billy Chambers called here on one of my first days and I totally screwed up the phone transfer. He called back a minute later, but Olivia was so pissed at me. I don’t get it! HE CALLED BACK AND EVERYTHING WAS FINE.

It’s also hard to get people to talk to me. I’m in charge of ordering new office supplies, and I e-mail everyone at the end of each week asking what people want, and no one ever replies. These guys are always on their phones; I know they see my e-mails. No one ever says “god bless you” when I sneeze, even though I always say it to them. They don’t even look up when I say goodbye at the end of the day.

Also, they were pretty pissed when I took the day off for Yom Kippur. Olivia asked if I could come in on a Saturday to make up for the day I missed. No one would ask someone to come in an extra day to make up for Christmas, ya know?

Huck and Quinn are mostly fine—Quinn’s still pretty new, so I feel like she’s got my back, but she’s distracted lately. I heard her on the phone talking about identity theft, so maybe she’s having some trouble with her bank or something. I like Huck because he never needs me to do anything for him and he turned out to be pretty friendly. Although, ah! My computer wouldn’t work the other day—I kept moving the mouse but the cursor wasn’t doing anything, and I kept hitting control-alt-delete and finally I asked Huck for help, and he was just like “Your mouse is slightly unplugged.” So embarrassing!

I’ve gotten in trouble a lot this week. I keep trying to tell myself that it’s okay, I’m still new and learning, but everyone else seems to always know what to do. I guess I could take more initiative, but a lot of times I’m not even sure WHAT to take initiative on. I’m making some dumb rookie mistakes, too. Someone named Amanda Tanner called for Quinn, and I totally forgot to pass along the message. She called again the next day, and I was so flustered (it sounded like she was crying!) that I forgot to get her contact info and didn’t ask what the call was about. So then I had to be like “Quinn, someone called today and it sounds urgent but I don’t have her number, want me to Google it?” And Quinn looked really stricken and asked if she called any other time and I lied and said she hadn’t.

In the conference room, they like to put pictures and stuff on the windows—kinda like a bulletin board. I didn’t order more tape the other day because no one would e-mail me back, as usual. Anyway, they couldn’t hang the pictures when they started on a case. Abby had a total shit fit. They just had to lay the pictures down on the table for a few hours until I could go buy some at CVS. Everyone else was cool about it but Abby kept shaking her head at me. Later that day, she asked me to change the water cooler, and was all “I can’t help, I have a bad back,” and no one else was in the office, so I did it myself. She just stood and watched me. SO embarrassing! I got water all over the floor.

Work this week was the usual at Pope and Associates: crazy! I really feel like part of the gang now. I’ve been killing it lately! No mistakes or anything. Olivia even brought me a coffee.

But I guess Steven quit? He didn’t show up on Monday or Tuesday which was strange because he’s been like “Oh, don’t let me forget, I’m going to show you how to do the check run early next week, we really have to have you do that,” for the past few days.

I finally asked Olivia on Wednesday if he was working from home and she took this weird sharp inhale and looked right at me and said “He’s living. A normal life. And so should you. Go home. Don’t hide behind your work. If you’re lucky enough to fall asleep with someone to dream about, go to them. Do not. Let. Them. Go.”

Like…okay? I don’t know why she made me go home—it was 10:30 in the morning. I was sad because I need the money, but also pretty happy because I went home and watched a million Say Yes to the Dress episodes and finally started a Pinterest.

I cleaned out Stephen’s desk the next day and it was so disgusting! All these sticky rubber bands and little baggies of trail mix. Oh my god, and there was this little eyebrow hair on a post-it note. UGHHHH. Honestly, I don’t even notice he’s not there. Like, the work P & A does isn’t any different without him. I hope we don’t get some new associate; I feel like we’re this dysfunctional family that secretly loves each other and it might be weird if someone new came along. 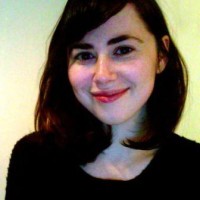 Molly Labell is a Boston based writer who likes to stay hydrated and sunblocked.