Welcome to the Dissecting Room, and Also Medical School

For years and years, since I was a little girl, what I really wanted was to be an architect. Specifically, what I wanted was to renovate and restore old houses, to find crumbling unloved buildings and patch them up. Oak floorboards, high ceilings, polished staircases, duck egg blue walls; I wanted to play with windows and light. I wanted to clear out the tangled gardens and strip back the plaster to the original bricks, sand down doors and warm the house back up. So when I was eighteen, I applied to study architecture at university. That was the year the bottom fell out of the economy of my country, taking the construction industry with it. Thus, that sunny September, I found myself in medical school.

So it’s evident that I wasn’t One Of Those People who Just Always Knew that they wanted to be doctors. Those people seemed to be entirely focused on medicine; they had known for years that they would end up here. They were diligent, caring, intelligent, dedicated, and it seemed to me that they were everywhere.

In the first week at medical school, everyone feels pretty pleased with themselves for getting in, so they like to throw you in at the deep end: the Dissecting Room. When I was in first year, this was housed in a Victorian Gothic Revival building, built in the mid-nineteenth century and somewhat resembling a small church. Except for, you know, the corpses in various states of dismemberment on metal slabs.

The building had to be kept cold, for obvious reasons, and it was rumoured that after dissection sessions the bodies were stored in the basement in tanks of formaldehyde. At the back of the room was a spiral staircase, leading downwards to the alleged storage facilities. Sometimes in idle moments I liked to imagine the staff lifting the cadavers stiffly down the little stairs to their tanks, where they would rest for the night in the fashion of Dracula.

The first thing I noticed about the dissection room was, of course, the smell. Hours later, when I went home and put away my coat (this was at the very start, when I would put away my coat carefully, even ironing it now and then), the smell would linger. Not just on the coat, but on my hair and even my skin, a clammy combination of formaldehyde and latex gloves and my own sweat.

There’s nothing quite like the bravado of a room full of high achieving type-As coming up against a significant number of corpses (+/- heads) for the very first time. Immediately, I broke out in a cold sweat. I had a furtive look around to see how everyone else seemed to be coping with the cadavers: facial expressions ranged from absolutely calm, to grimly determined, to a few who seemed to be looking longingly at the sink. Consider, after all, that this was Freshers’ Week. Most people had just moved out of home for the first time and had thus been behaving in a manner befitting this newfound freedom. Surreptitiously, a boy took a small step back and leaned casually against the wall. I knotted my hands behind my back.

It wasn’t enough though, just to be in the presence of the undressed-and-cut-up deceased. Now we were medical students, so we had to get in there and have a proper look. Not to be left behind in my very first week, I touched a gloved finger to a shriveled arm. To my quiet horror, it was coldly moist.

We became accomplished corpse pokers, and (somewhat) accustomed to the smell. A few weeks later, we were allowed to take turns at the dissection itself. We took a small sharp blade to the thickened left ventricle of a heart.  I marveled at the heart sitting placidly in my hand. It had lived a whole life in someone else. It always amazed me to imagine the former life of these people that had been generous enough to donate their bodies, for us to learn and make mistakes. The life (if that’s the right word) of a cadaver is not terribly dignified.

When I made a l tentative incision it was tough and fibrous, like overcooked steak. That was the end of my meat eating; I have been a strict vegetarian since. Occasionally someone will ask, conversationally, why I don’t eat meat. They usually regret asking.

As with almost anything, we became habituated to hanging out with the cadavers twice a week, and eventually even those who were most squeamish to begin with were pulling tendons to make dead fingers wriggle. The head technician kept a watchful eye from the upstairs gallery. Apocryphal stories abounded about dead hands thrown down on bars in days past; more likely were bored students poking each other with femurs at the end of a long session.

The technicians were mostly trainee surgeons; deft with the bone saws and unafraid of sharp blades. Little groups of us would huddle around the slab and they would explain methodically how the different pieces fitted together, peel back the layers, lift up the delicate strings of nerves for our examination. I was secretly (and illogically) surprised that the nerves were not, of course, coloured yellow as they were in the textbooks. (I kept this observation to myself.) Sometimes, as the term progressed, the technicians would unfold and chat to us. One had grown up in Iran, with Farsi as his native tongue; moved to Pakistan as an adolescent where he had learned Urdu, and now practiced in Europe in English, his third language. It seemed to me that he was certainly One of Those People who were Just Cut Out for medicine.

Two years later we finished the anatomy curriculum and moved on to real patients. (They were no less terrifying but altogether warmer.) A new lab was built and the cadavers were transported the short distance down the road, reportedly at night to avoid traffic. I have no way of knowing, of course, but I like to imagine them loaded up in the back of the lorry, hearts cold and still, safely cocooned in their storage tanks. 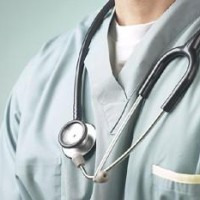