“Undead. There’s a word I really hate,” I sighed. “It’s phony. I could puke every time I hear it. And furthermore, what’s with all these vampires?”

“Vampires are alright, I guess — but they don’t appeal to me,” I said. “I mean they’re alright if they go around flying off with lonely girls all the time, and like that, but you don’t do that kind of stuff if you’re a vampire. All you do is stay in your mansion and buy cars and drink blood and look like a hot-shot. And besides, even if you fly around with girls and all, how would you know if you did it because you really loved them, or because you really wanted to drink some girl’s blood, the way it is in horror movies?”

“Well, of course he is. I mean, that’s pretty much his prerogative, isn’t it? Since he got bitten and all. Here I am, fresh meat, just waiting for him to deliver the kiss of undeath and turn me into him. Vampires are the worst. Sometimes, I imagine all these little kids playing some game in this big field of vampires. What I have to do, I have to chuck garlic at the vampires. That’s all I’d do. Vampire balloon darts, all day long. I know it’s crazy, but that’s the only thing I’d really like to do. I know it’s crazy.”

“But vampires are so dreamy,” said Phoebe.

“On the other hand, is saying that porn’s more honest or, I don’t know, real than vampire sex-metaphors just me imposing my goddamn male worldview? If teenage girls are more turned on by fangs and pros than bad acting and crazy AVI files, who am I to judge? And what’s the point of judging anyway? My thoughts won’t change gender equality.

“But then why have an opinion about anything? What I say about Syrian weapons and abortion and health care won’t change anything either. And I barely know enough to have an opinion at all. ‘Well-informed’ people get most of their news from one or two biased sources. And they don’t have open minds in the first place. It can get on your nerves after a while.” Boy, it was all getting hopeless, let me tell you.

“But our impressions of the world are phony anyway. Thanks to the lack of information available to us and the fallacies of our senses, I mean. We always have to make up our minds all the time knowing quite well we could be completely wrong.”

I’m not too sure old Phoebe knew what the hell I was talking about. I mean she was only a baby when Twilight came out. I started walking toward the cave exit, but Phoebe shouted “Holden!” She was sitting way up against the cave wall. “Dad already got to me.” Then she grew fangs and bit my neck.

That Phoebe. She killed me.

Once I’d been turned into a vampire, and all, I started to develop a taste for blood. But the truth was, if you really want to know, was that I’d never given a girl a hickey before, let alone driven my fangs into her neck, ruptured her arteries, and sucked out all her blood. So when the vampire chief asked me if I wanted to go to a brothel to feed on girls, I said okay. It was against my principles and all, but I was feeling so thirsty for blood I didn’t even think. That’s the whole trouble. When you’re feeling the thirst, you can’t even think.

When I opened the door, this prostitute was standing there. “How do you do,” I asked, suave as hell. Then I remembered I had to be invited inside. “Mind if I come in?” I was getting better and better at this vampire thing as it went along. I really was.

She nodded and pulled her dress over her head. I certainly felt peculiar when she did that. I mean she did it so sudden and all. I know you’re supposed to feel pretty thirsty when somebody gets up and pulls their dress over their head, exposing their bare, bitable flesh, but I didn’t. Thirsty was about the last thing I was feeling. I felt much more depressed than thirsty.

“What’s your name?” I asked. All she had on was this phony fur slip, like she had a thing for werewolves or something. It was really quite embarrassing. It really was.

Maybe it was just because she was named after my new worst enemy, but I sure started feeling peculiar right about then.

“Don’t you feel like talking for a while?” I asked her. It was a childish thing to say, but I was feeling so damn peculiar. “Are you in a very big hurry?”

She looked at me like I was a madman. “What the heck ya wanna talk about?” she said.

“I don’t know. I’ve been thinking a lot about women lately. How they’re treated, and all. I just thought, you probably have a lot of opinions on that, being a prostitute. I try to be good to women, and all.”

“Like fun you do,” she said. She was an angry girl. I mean, given the situation, I guess it was understandable, but it’s not like she knew I was a goddamn vampire. “You don’t know a thing about what it’s like to be a woman,” she said. “With guys, you have guy time that’s separate from sexuality time. You can go out with your friends and not think about girls for a while, and not get hassled. But if you’re a girl, everything’s about being a girl. You can’t walk down the street without guys leering. You can’t watch TV without seeing full casts of models pretending to be regular characters. You can’t post a video without half the comments being about your being either sexy or ugly. Whenever a guy talks to me, any guy, any guy at all, I wonder if he’s just trying to get in my pants. And most of the time, they are.”

I sort of hated her by the time she finished talking. “Then what am I supposed to do?” I asked. “I can’t just keep walking on eggshells around girls forever. I’m respectful, and all, but boy, it’s impossible to know how to behave when all these feminists keep coming up with different sets of rules. ‘Be a gentleman. Treat her like one of the guys. Open doors for her. Don’t open doors for her. Girls like dominant guys.’ It’s crazy.”

“You don’t have to try and follow a bunch of rules,” she said. “Just don’t be a sociopath, hey? Think of us like people, not things to try and screw. If you wanna, you can be old-fashioned, or not, or dominant, or not, but try and think if it were you. You wouldn’t wanna be called out for your body all the time. You wouldn’t wanna find out someone only wanted to be friends with you to see you naked. Stuff like that.”

I started feeling pretty lousy, then, because I was doing that, sort of. She thought I wanted to have sex with her, but I actually wanted to suck her blood. I thought about baring my fangs and showing her the truth, but just then, the moon came in through the window.

Sunny growled and turned into a goddamn werewolf right in front of me. Guess the fur slip should have tipped me off. The crazy part was, other than the werewolf thing, I mean, was that I thought about staying for a moment. I really did. How many guys get to lose their virginity to feminist mixed monster sex?

But it was one genre cliché too many for me, I’ll tell you, and I bolted out of there, still thirsty as hell. I don’t know where the ducks go in the winter. But when I find out, I’ll be drinking a lot of duck blood. 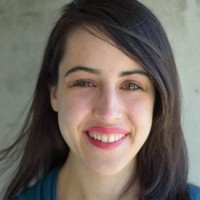 Ilana Strauss is a writer, director, cartoonist, and illustrator. She was an English major at Yale, and her articles have appeared in Reader’s Digest, The Washington Post, The Jerusalem Post, and Good Magazine. She prefers hot chocolate, but will happily accept any warm beverage.