The Ocean Is Full of Worms and Gonads and Monsters

Lynne Elkins’ previous work for The Toast can be found here.

Today, I am not here to talk to you about science*. Instead, I would like to share a truth that you may not have fully realized, which is that the ocean is a horrifying place full of monsters.

You might be thinking, “But I always wanted to be a marine biologist! I love dolphins!” And to be fair, dolphins can blow coordinated hunting bubbles and have names for each other and probably are much less prone to sexual assault than folks like to say. But most of the ocean is not made of dolphins, or even mammals. It is mostly full of worms.

Okay, fine, maybe not “mostly.” or “full.” But there are a lot of worms. Here, again, you might be saying, “But I wanted to be a marine biologist and study things other than charismatic megafauna! Marine worms are beautiful!” Sure, some of the worms have pretty colors and crazy fringes, which they obviously use as a glamour to fool gullible humans. But you are forgetting the most important thing: THEY ARE GIANT WORMS. And some of them look like this:

Don’t get me wrong: marine worms are fascinating. This is because monsters are terrible and fascinating. Consider, for example, the very famous Giant Tube Worms that live around deep sea volcanic vents. This is a 7 foot-long worm that can grow 5 feet in under two years, with no digestive tract, with which is red because it contains hemoglobin. In other words, it is a worm that nearly has blood that is taller than you and uses its mouth as its anus.

(These monstrous properties, of course, are the true reason to celebrate the 1991 discovery of the Tubeworm Barbecue.)

You might now be asking, “But what about non-worm things?” Sure. Let’s talk about some other creatures, like, say, echinoderms. Everyone likes starfish, right? Everything that isn’t hunted by starfish, I guess. Have you ever seen the inside of a sea urchin? I have, and please let me tell you about it: These alien monsters are almost completely hollow, except for a skinny intestinal tube that floats around inside their body, and the whole “Aristotle’s Lantern” skeleton mouth thing, which contains rasping teeth so hard they might be able to grind through rock (debated! these are things you debate about monsters.) The little hole at the top of the spiny shell is, in fact, the anus. Marine animals probably could be classed as horrifying simply based on the positions of their anuses. I would also like to address the whole “five-sided skeleton” thing, which, while interesting, is wrong and should not exist. Also, crinoids (sea lilies and feather stars) were echinoderms that reached a meter tall or more in the geologic past; and now we know that they are, in fact, still around, floating about or walking on their fronds like legs. I have touched them and seen YouTube and can confirm this is true. Summary: echinoderms are monsters.

Moving along: cephalopods, once the enormous monster predators of the oceans, are terrifyingly intelligent, curious, capricious thieves that can squeeze themselves through tiny holes and instantaneously mimic random objects (and to be fair, they still include some enormous predators, such as giant squid.) The mimic octopus takes cephalopod mimicry skills to terrifying heights. Blue-ringed octopods are some of the most venomous creatures on the planet, and they do bite humans. And the extreme deep-sea vampire squid (whose full latin name literally means “vampire squid of Hell”) is blood-red with “limpid, globular eyes,” can release a bioluminescent mucus into the water from its “writhing arms” which blinds opponents in a crazy light show that lasts up to 10 minutes, and can, you know, turn its own body inside out. Of course.

We have not yet discussed isopods. That is mostly because I wanted to delay the horror for myself. They are horrifying for many reasons, such as, for instance, what they look like:

Or this. Or this.

But those examples, while terrible in appearance, are not the worst isopods, which honor is reserved for the parasitic isopods. Those are the ones that attach themselves to the tongues of fish, causing the tongue to wither and fall off; they then take up permanent residence in their host fish’s mouth. Some live off whatever food the fish is eating, while others drink the fish’s own blood. Oh God. Why am I writing about this.

Moving on! Sea squirts! At least sea squirts look neat, right? They aren’t parasitizing anyone’s tongue! This is positive! Except that in transitioning to sessile adulthood, the sea squirt, whose larval stage is nearly a vertebrate animal, proceeds to dissolve its own brain and most of its body structure so it can become a weird, squirty blob. Oh.

Scallops are bivalves that have eyes and can swim.

This list is just far, far too long, so here is a summary of characteristics of many other marine invertebrates: they have squishy, gooey tentacle arms; they sting things, sometimes to kill; they coat things in disgusting, smelly, often stingy slime; they eat by digesting each other with juices; they poison our delicious food; and they parasitize each other and, sometimes, us.

And are they delicious? Yes. Many monsters are delicious.

What about vertebrates? They’re better, right? Nope; a thousand times nope. They are not better. They are worse. Here at The Toast you have already learned about the spectacular misandrist anglerfish female, who is parasitized by tiny males whose bodies are absorbed onto her side, and who thereafter accesses their gonads as she sees fit. She also happens to be a glowy-bobble-headed monster with hairy tendrils and weird skin and a giant mouth full of insane teeth.

Oh! And barreleye fish! Barreleye fish have see-through, bulbous, fluid-filled heads, with crazy giant eyes. Why would anyone need a transparent head? There is no reason, except to be a monster.

Other ridiculous, monstrous marine vertebrates have had their heyday on the internet; you may have seen them. The deep-sea blobfish turns into the quite-famous gooey, creepy monster blob when surfaced. The sheepshead fish has horrible, human-like teeth in its horrible monster mouth. The pacu is a fish best known for eating human testicles. Atretochoana eiselti, a legless amphibian, has been written about because of its horrifying appearance. Speaking of animals that resemble snakes, how about actual marine snakes? Like venomous reef snakes! They breathe through their skin and are, well, highly venomous snakes.

Also on the subject of snake-like things: whales. Whales are huge, sure, but mostly we are fond of them, because they are big smart mammals who like to do tricks and speak to each other in whale dialects. But then there are whale penises, and how those penises behave. So while a whale may not be very terrible, it could have a (surprisingly self-directed) monster appendage.

Then there’s what happens to dead whales, whose enormous, decomposing bodies on the deep sea floor feed whole ecosystems. A recent finding has revealed that in addition to these bizarre ecosystems created by dead whale carcasses in the deep ocean, other large marine animals like sharks provide similar habitats. The latest discovery is an ocean “graveyard” containing four such carcasses and some dead “devil rays,” all of which are covered in creepy eels and other creatures. Allow me to list the things that are wrong with this picture: 1) the giant carcass of a dead, decaying creature that was larger than an honest animal should be; 2) four of those; 3) the phrase “ocean graveyard,” have I mentioned that; 4) the swarms of eels that lie in wait to attack other feeders; 5) the phrase “feeding frenzy” altogether; 6) the fact that a lack of bone-eating worms is remarkable.

As a final note, I will ask you to consider how, exactly, the creatures of the oceans reproduce. (Other than the mammals and their giant, questing penises.) Fish, amphibians, corals, bivalves: how do they spawn? I will tell you: they eject their gonads directly into the water. Some of the sperms and some of the eggs may be lucky enough to find each other, so they can go off to grow a new monster. And the oceans are full of life that reproduces this way, and each animal that does so ejects hundreds of those gonads into the water each time it mates.

In other words: the thing the ocean is actually full of, is gonads. Trillions upon trillions of gonads. Every nose- or mouthful of water you accidentally ingest at the beach, every droplet you lick off your lips after snorkeling, every wave that splashes in your face when you’re riding on a speeding motorboat is, in fact, mostly the gonads of horrible monsters.

*No, really: this is completely outside of my scientific expertise. As a high-temperature geologist the presence of life is mostly annoying, because it obscures my rocks! So I happily solicit additions to my brief sampling of ocean monsters from the qualified biologists and oceanographers among us. 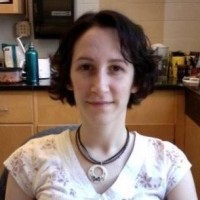 Lynne explores how magma is made by studying the mineralogical, chemical, and isotopic makeup of igneous rocks. She also teaches geology, plays music, dances, and hangs out with her fabulous fluffy pets.