I got my first gel manicure last week and it was AWESOME. Sure, it looks amazing and hasn’t chipped all week but it’s the chemistry that really blew my mind.

Chemistry gets a pretty bad rap. In school it’s a class to survive rather than enjoy. In the news any mention of chemicals is usually a safety warning, something to avoid rather than celebrate. Like nail polish, fear of chemicals is also aggressively marketed to women, particularly through advertisements for “natural” or “chemical free” cosmetics. This makes worrying about the safety of chemicals seem more feminine, perhaps a bit irrational, and definitely unscientific.

Some scientists like to make clever jokes about how clever they are for not falling for “chemical free” marketing. Yes, “chemical free” is kind of ridiculous and technically impossible, but I also understand the underlying sentiment of wanting to find products made with better, more sustainable, or less harsh chemicals. As a scientist I also understand just wanting to learn more about the ingredients in the products that I use. What’s unscientific about wanting to know how things work and how they’re made?

So let’s start with the chemistry of regular nail polish, because it is made of things like explosive cotton and fish scales. The main ingredient in regular nail lacquer is nitrocellulose, a mixture of an indigestible plant fiber and the stuff that makes nitroglycerin or TNT explode. While it was originally used for things like gunpowder and blast mining in the 19th century, today we also use it in all sorts of other things like ping pong balls and the sticky stuff that holds rows of staples together. When it’s dried on your fingers it doesn’t pose much more of a threat to your safety than your own fingernails, which you shouldn’t be lighting on fire anyway.

Along with the nitrocellulose, the solvent, some pigments and plasticizers, nail polish might also include “pearl essence” to give it a nice shiny look. Pearl essence shines like the beautiful silvery iridescence of fish scales because it is made out of ground up beautiful iridescent fish scales. Now that we’ve decimated many fish populations with overfishing, cheaper mineral alternatives are more commonly used.

Gel nail polish works in a totally different way. Unlike nitrocellulose polish, which will dry out gradually as the solvent evaporates, gel polish will never dry unless it is activated by ultraviolet light. Like a superhero gaining super strength after a dose of radiation, a “photo-initiator” molecule mixed into the polish can absorb the UV energy, break itself in half and make two super-charged molecules. These charged molecules are called free radicals — a type of chemical that gets an especially bad rap, because that extra energy can be used to break all sorts of chemical bonds where it’s not supposed to. In the nail polish, the extra energy jump-starts a chain reaction that transforms the liquid polish into a hard layer of plastic within seconds.

In most gel polishes, the photoinitiator is benzoyl peroxide, which is also a common ingredient of over the counter acne creams where its job is to peel the top layer of skin off your face. In nail polish it’s mixed with the liquid form of a plastic called methacrylate. The free radical from the benzoyl peroxide pushes electrons around in the liquid methacrylate monomers (“mono” = single, “mer” = part) so they form bonds with each other and create a solid polymer (“poly” = many). Methacrylate in its many different forms is used in all sorts of other applications where strong and flexible plastics are needed, like for fixing broken car windshields or as BONE CEMENT in orthopedic surgery.

The chemistry involved in balancing the amount of methacrylate monomers and benzoyl peroxide can be tricky. The Nail Systems International website describes the process with an analogy that us women-from-olden-times can understand: “think of how different a recipe would be if you altered the number of eggs or cups of flour.” Too little photoinitiator and the plastic will take so long to harden you might get a sunburn from the UV. Too much and the reaction will happen so quickly and generate so much heat that it could burn your fingers. Just like baking.

Condescending explainer websites are of course not the only gendered aspect of nail polish chemistry. Beyond chemophobia and cosmetics, nail polish is often seen as decorative and frivolous, superficial “girl stuff.” But when we look closely at the molecules in the list of the ingredients, we find that nail polish is also totally hard core.

So next time you’re at the salon and trying to decide what kind of polish you want, just think: gunpowder or bone cement? fish scales or radioactive super-power? 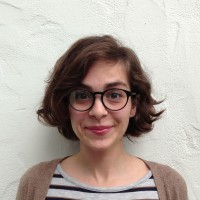 Christina Agapakis is a biologist and writer based in Los Angeles. She blogs for Scientific American, and once made cheese out of male tears.