If Kal Penn Were Your Boyfriend

Previously in this series: If Serena Williams Were Your Girlfriend

If Kal Penn were your boyfriend, you wouldn’t fight often. Not because you don’t have arguments — you definitely have arguments — but they tend to be worked out more quietly. Your debates, however, tend to descend into nonsense when you get into the “agree to disagree” phase. “No, you’re wrong and dumb and your opinion is wrong and dumb!” “Fine! I don’t care! Who even cares about this?? Do you want tacos tonight?” “YES I want tacos tonight!!”

If Kal Penn were your boyfriend, when you did have fights, you would hold hands. You wouldn’t know how it became your thing, but it would mean that sometimes he’d follow you into the kitchen if you had to turn off the kettle in midst of fighting over the way he swerves sometimes when he drives or the way you leave the coffee pot on for too long.

If Kal Penn were your boyfriend, you’d know he was more of a Harold than a Kumar anyway, which means YOU would get to drag HIM on all these cool adventures. You both know how weird it can get on the New Jersey Turnpike.

If Kal Penn were your boyfriend, your celebrity cheat list would usually match up because you both have a thing for power couples. The President and the First Lady. Tom Hanks and Rita Wilson. Chris Pratt and Anna Faris.

If Kal Penn were your boyfriend, you would appreciate each other’s intelligence without any resentment or judgment on each other’s parts. He knows you probably know more about space/ants/feminism/pyrotechnics/coding/white water rafting/etc than he does, and whenever it comes up — on TV, in a book he’s reading, during a presidential debate — he turns to you. “Oh yeah,” you tell him, “Leafcutter ants form the largest and most socially complex communities second to humans.”

If Kal Penn were your boyfriend, he’d never laugh when you mispronounced a word that you had learned from reading.  He’d appreciate that you are a voracious reader, and would gently correct you without being smug about it. “In-tegral.” “What?” “It’s pronounced in-tegral.” “Are you sure?” “Yes.” “Not in-teg-ral like integrity?” “No.”

If Kal Penn were your boyfriend, he’d be the responsible one. He’d keep track of the grocery lists and remind you when it was time to get your car inspected. He’d always be in charge of keeping track of the boarding passes and the car rental reservations when you went on a trip. He would remind me you to pack your passport the night before. There would never be a repeat of that time you were sure you were flying out of Burbank but were actually leaving from LAX.

If Kal Penn were your boyfriend, the one minor point of contention in your relationship would be your inability to decide on where to go out to eat. “I’m just not really feeling sushi tonight,” he’d say. “Let’s try that new Italian place.” “I don’t know…I think it’s too hot for Italian.” “I was unaware that Italian food is only consumed in certain meteorological conditions.” You’d sit in the car silently next to each other. “Tacos?” “AGAIN!?”

If Kal Penn were your boyfriend, your dad would refer to the two of you as “Kal-vin and Hobbes.”  “Dad, please stop.” “You loved that comic strip in high school! Besides I thought all of you kids have couple names these days.” “What? Dad. No.”

If Kal Penn were your boyfriend, he would get the joke when you continually called it Coffee Leaf and Tea Bean. Upon hearing it during a dinner party, NPH might go, “Uh, don’t you mean Coffee Bean and–” “No, Neil, trust me,” says Kal. “I’m Indian. Tea actually comes from beans.” “No, it doesn’t!” snaps NPH, as his eyes dart between you two. “Oh my God, Neil, you thought coffee comes from beans?” you say. “That’s not true, someone has lied to you.” “You guys are messing with me,” he says, but he looks haunted. “I know you’re messing with me.” You both stay deadpan.

If Kal Penn were your boyfriend, you’d go to parties — in both DC and Hollywood — with a game plan for jerks. One hand squeeze means the other thinks you’re right, but this person isn’t worth fighting. Two hand squeezes means, “Let’s burn this son of a bitch.”

If Kal Penn were your boyfriend, you’d have contests when you were away from each other. You bet that you can talk to more people in one day than he can — and it’s always a toss-up because you exude a natural charm and grace that draws people to you like moths to light, but he’s famous, so.

If Kal Penn were your boyfriend, you’d having a running joke with John Cho about monitoring Kal Penn. “He’s watching a lot of cartoons,” you say. “Mm, he does that sometimes when he’s blocking out childhood memories. How’re his bowel movements?”

If Kal Penn were your boyfriend, you’d be great at lip-synching. You joke that all those Bollywood movies turned you into Broadway actors in everything but singing ability. You’d lip-synch songs to each other everywhere from the car to the dance-floor at weddings. He’d get invited to Lip Synch Battle and you’d train for it, Rocky-style. Except instead of “Gonna Fly Now,” you’d use “You’re the Best Around” because it has more words.

If Kal Penn were your boyfriend, he would listen to the various ideas you had for even more sequels to the Harold and Kumar movies. “There should be a lady version,” you tell him. “With Liza Lapira and Tiya Sircar.” “Actually,” he says, stopping mid-laundry fold. “I’ll ask Liza about it during our next filming. There’s no reason why that shouldn’t exist already.”

If Kal Penn were your boyfriend, you would watch his new show, but he knows you texts and fiddle with your phone whenever Josh Duhamel is on screen.

If Kal Penn were your boyfriend, he would never defend a comedian’s right to be “un-pc” or defend an offensive joke as satire. “I can criticize someone’s comments without condemning them as a person,” he’d say. “Comedy is only subversive when it takes aim at those in a place of institutional power,” he’d continue. “That’s what we tried to do with Harold and Kumar.”

If Kal Penn were your boyfriend, you’d start receiving the Design Within Reach catalog soon after moving in together. “That’s a piece of driftwood that they’re calling a bench and they’re charging $9000!?” you’d shriek. “Why does everything in here look like Ikea furniture but cost 10 times as much?” Kal would ask. “Whose reach are they referring too?” you’re still shrieking. “Yeah, but don’t you think this lamp is kinda cool?” The next week, the Fortuny lamp would be in your living room.

If Kal Penn were your boyfriend, when something good happened to you, you’d tell him and laugh and say, “Gee, I don’t deserve this!” And he’d look at you and say, “Yes, you do.” 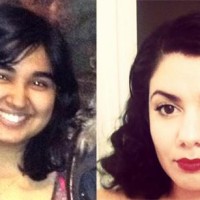 Cross-platform and -country friends, Victoria Baritz and Sulagna Misra met through Tumblr when writing about Chris Evans. They are open to sharing him on alternate days. Check them out on Twitter at @topsy_tori and @sulagnamisra.