The process will take two hours, but we’re gonna do it anyway, okay?

Start with a chicken. A capon is best, you won’t have a capon, but it’s important that you acknowledge out loud that you are, in fact, already starting at a deficiency. You have a chicken.

Boil water, add chicken. Boil water and chicken. After a while, skim the fat off the top. You will not get all of it because that is, frankly, impossible. Nonetheless, you have already committed two failings, and it’s important that you take a moment to feel bad about yourself.

The story goes that after the angel of death killed all the firstborn children in Egypt–his own included–the Pharaoh finally agreed to let the Jewish people go, and in our hurry to escape before his grief turned to anger, we didn’t even wait for the bread to rise before we escaped into the desert, where, if you’ll remember, we wandered lost for forty years.

The point is, no one has ever felt good about eating matzo.

Now chop the vegetables. Three carrots, three stalks of celery, half a large white onion, four cloves of garlic.  If anyone has offered to help you, this is the only step in which they may participate. Later, when someone compliments the soup, you will graciously say, “well so-and-so helped,” to which they will be forced to reply, “oh, I just chopped the carrots,” and you will nod, glowing with the praise of both your talent and magnanimity.

Add the vegetables to the pot. Boil everything for another, longer while. Long enough to pick a fight with someone you swear to love. One of you should be shouting. One or both of you should use an old Yiddish word. That’s fakakta and you know it. You’re meshuggener. It does not matter what the fight is about, it’s all part of the same stream of arguing you’ve been going down since 1997. In fact, one of you should bring up something that happened in 1997. You will both turn to look at it, like a sapling you planted that’s become a tree. A physical representation of how goddamn long you’ve loved each other, you putz, you beautiful schmuck. I won’t let you forget it.

In the absence of your family, an episode of The Sopranos will suffice.

Use the soup mix, but make the matzo balls by hand. The wet matzo and egg batter will get caught beneath your fingernails and you will think we escaped from Egypt for this?

As a child, you heard enslaved in Egypt and thought pyramids, and even today, you have a hard time shaking that assumption.

Roll the batter into separate matzo balls, about one-inch in diameter. Drop them into a separate pot of boiling water, then cover tightly.

Although the Book of Genesis and Book of Exodus describe a period of Hebrew servitude in ancient Egypt, more than a century of archaeological research has discovered nothing which could support this claim— not the four centuries toiling in Egypt, nor the escape of well over a million Israelites from the Delta, or the three months journey through the wilderness to Sinai.

Add the matzo balls to the soup, let it all boil together for a while. At this point, someone should be shouting that they’re almost ready to take the brisket out if everyone would stop whining and set the table. Someone should already be setting the table. There should be silverware clanking and an old man with a bad toupee telling a bad joke and two women in gold jewelry should be sitting with your little brother on their laps, teaching him all the words to an Ella Fitzgerald song, and a teenaged boy should be complaining about having to use sparkling grape juice for the ceremony instead of the ritual glasses of wine, and no one should be paying him any attention because my god your kitchen smells good, my god.

In the absence of your family, tupperware will suffice. 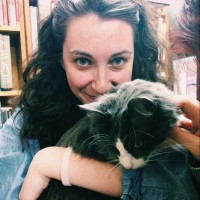 Liz Zaretsky listens to a lot of Taylor Swift.