On Community Spaces and Being a Trans Muslim

On Friday afternoons, we do our best to meet up somewhere in the city. Sometimes it’s my apartment, sometimes his; maybe the park if it’s nice out and we can find a space with some privacy. Privacy is important. We lay out a patchwork of blankets and sit in silence for a while, taking in the day or letting go of the week behind us, depending on what kind of week it’s been. After a while he pulls up a song on his phone, presses play, and sets it between us as we arrange ourselves. Shoulder to shoulder, facing Mecca, we focus quietly and listen to the call to prayer. We are a congregation of two – a tiny fraction of the Muslim Ummah, isolated by a culture of segregation and orthodoxy.

We’re the transgender Muslims of Chicago.

Gender variance isn’t very well understood or accepted in modern Islamic culture (or most other cultures, to be fair!) It’s a society of explicit gender segregation, and a society in which gender expression is limited to few options. Outside the mosque, the Good Muslim Men wear the taqiyah while out from the back door come the Good Muslim Women in hijab. If you want to pray in public or connect with a community of those who share your faith, putting forward a distinctly “correct” gender presentation is required. There’s a process which every trans person knows very well – the act of a person assessing the gender of a stranger, and from there, figuring out how to treat that person. It can be as subtle as the decision to refer to the person in front of you as “brother” or “sister.” It can be as violent as attacking someone for failing to fulfill gendered expectations. As a transgender Muslim, you have three options: fulfill the gender role proscribed to you and deny your trans identity, leave the mosque and practice in private, or pass well enough in your preferred gender and add an extra prayer every day that the community doesn’t find out your status as a trans person. I chose the third, but I was granted a path which made that decision much easier than what most have to go through.

I was twenty-five when I converted to Islam. I had already been out as trans for near a decade, and navigated the world as a woman in a pretty uncomplicated fashion. Spending far more time dwelling on the context of my conversion as a woman rather than as a trans person, my transgender history was something of an afterthought in the process of converting. I had the distinctly cosmopolitan experience of living in a big city far away from my “old life,” free from the complications of history coming back to betray me by way of a high school friend or family member in the grocery store clocking me. Still, finding my place in the Muslim community was trying at first. Passing or not; I’m still a tall chubby white girl with short, curly red hair. I don’t like drawing attention to myself and am happy to pass through life mostly unnoticed. In the scene of ex-punks and queers I knew so well, I was very good at not being noticed. In the face of a new, scary (though exciting) and highly normative (though beautiful and brilliant) community ahead of me; I did not have the security of invisibility I had once known. Still, I was let in the door with open arms. As I studied Qur’anic Arabic textbooks the men at the bookstore called me “sister” and guided me to the best scholars. While getting side-eye and questions from my old community when I decided to take on hijab, I found myself chatting with other women on the train swapping hijabi trade secrets for surviving Chicago summers. I was a weirdo, sure, and an outlier; but I was a Muslim woman.

Just not a Muslim trans woman.

It was around this time that I attended the LGBTQ Muslim Retreat. The prospect of hanging out in the New England wilderness with a bunch of queer family was enticing – but more importantly, it felt like for the first time in my life I might meet another trans Muslima.

To say the retreat was transformative is an understatement. The wisdom and intensity within the ninety-some attendees was mind blowing – it’s probably for a different article and I’m sure a dozen people have already said it better than I ever could, but suffice to say I have no doubt that this cadre of queer Muslims is bound to change things. Whatever, another time, moving on:

On Saturday night there was a transgender caucus in a small library on campus. There were only three of us there. I was once again the only person on the transfeminine spectrum.

Just as in my community back home, I decided to keep my trans status in the closet for the time being.

I met M at the retreat. Two thirds of the Trans Muslim Contingent, and it turned out we lived in the same city. While I spent my childhood in post-hippy liberal Christian churches, M grew up in the orthodoxy and gender segregation of a particularly conservative upbringing in southeast Asia. He refused to go back to the mosque in light of the violence and repression of gender policing in his youth, though he held on to his faith and decided to practice in private. I still navigate the segregation and traditional conventions of modern Islam, but choose to put my queer/trans brothers and sisters (and gender nonspecific siblings) first. Since the retreat, M and I catch up once a week or so. If he isn’t working on Friday, we share in Jummah prayers together; when one of us is busy, the other can Skype in to an inclusive service put on by a mutual friend in Toronto. It’s small, but we have our little queer ummah, and within it our faith stays alive.

As Ramadan approaches and we look for a family to break fast with come sundown, the realities of being a transgender Muslim set in. Flashing all of the proper signals I pass through gendered space unscathed, always left fearing how much I have to lose if outed. Some are forced to put on drag as a different gender just to feel accepted in their faith. Others eat dates behind closed doors, pushed out by a culture of exclusion and gender policing. But together, we create an alternative: meeting as one, praying side by side, and building our own communities.

Being inclusive shouldn’t be a radical act. When I’m kneeling in some quiet corner of Humboldt Park praying next to my brother, it doesn’t feel like one. But when our lives are upended and we’re denied acceptance through discrimination and gendered violence, simply being there for one another and celebrating the strength in our diversity can be a beautiful and transformative event.

To find progressive Muslim spaces, you can check out the Inclusive Mosque Initiative for international locations and resources. As people come together, diverse and inclusive Muslim community is popping up all over the place – until then, the El-Tahwid Juma Circle at the Toronto Unity Mosque broadcasts its services every week over Skype for those who can’t access safer spaces in person. Mahdia Lynn rolls with a small cadre of queer muzzies in Chicago and is 98% already certain that you’re an awesome person, so you can send inquiries/comments/tasteful selfies to mahdialynn at gmail dot com. 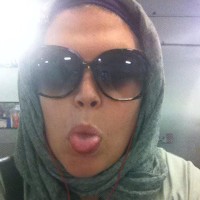 Mahdia Lynn resides in the Midwest while she searches for the perfect breakfast joint and makes faces at children on the bus. She blogs about comics, Islam, and the sociopolitical machinations of the Adventure Time universe.