Erica Ruth Kelly’s previous work for The Toast can be found here.

Some American Idol drinking games are so socially irresponsible they require that players imbibe whenever they hear the word “dream” on the show. You know, as in “This has been my dream since I was a kid,” usually confessed by a 14 year-old who’s been led to believe that a glorified popularity contest is akin to working their asses off in the music industry. I shouldn’t be too hard on these young bucks though, since own my childhood dreams stemmed from the illogical depths of some of my favourite TV shows too. And much like Simon Cowell in Idol’s heyday, reality was around to crush them.

Are You Afraid of the Dark?

To my mind, none of the submissions to the Midnight Society were quite as terrifying as the premise of the show. It’s about a group of kids that get together in the woods at night. Obviously no strangers to classic horror tropes, are we supposed to believe they’re oblivious to the amount of danger they’re putting themselves in? Um, guys, IT’S A FOREST. Remember Twin Peaks? Evil Dead? Hansel and Gretel? Why aren’t you having this meeting in someone’s basement over Tang and Bugles? That aside, I dreamt of joining the ranks of my main man, Gary, weaving mysteries with enough twists to confuse M. Night Shyamalan. The only problem: I forgot to what degree scary stories seeped into my subconscious. This mental state, exacerbated by how afraid I actually am of the dark, made for many nights of restless sleep.  Knowing this was no way to live, I let that dream die, the way people die in the forest at night. Seriously guys, where were your parents?

I also questioned the absence of parents in another one of my favourites, Camp Cariboo. The kids on the show appear to be in some kind of camp purgatory — their folks never drop them off nor pick them up. That didn’t faze me – I was destined to be a camping guru. I headed off to a sleep-away camp at the age of 9. It was the same camp my parents had met at. Alas, the romance that must’ve permeated the air during Mom and Dad’s time there was replaced by the B.O. of a dozen fellow cabin members who refused to take showers following the unceremonious breakdown of the hot water tank on the first day. The fun-loving, fast-talking Keeners were replaced by a slew of questionable team sports and even more questionable food. My abrupt introduction to homesickness, accompanied by nearly vomit-inducing crying, made it such that all the gimp bracelets in the world couldn’t distract me from how much I wanted to leave that smelly place.

Mr. Dressup, the arts-and-craftsman extraordinaire, was the Martha Stewart of his time. He created the universe I wanted to live in. The Tickle Trunk, Alligator Al’s Trading post, even the creepy owl clock – I loved it all, especially Casey and Finnegan’s treehouse. I’d spend hours imagining living in my own treehouse. What I didn’t consider was how exactly Casey was surviving in there. Where did he get his food? What kind of heating did it have? Was it central? How was he affording it? Did he have a job? And wasn’t child labour illegal? These variables, along with mild case of claustrophobia and an unparalleled ability to get splinters, made treehouse living as feasible as my dream of having such a finely tuned relationship with a dog that we could communicate through silence.

Under the Umbrella Tree

I always thought Iggy, Jacob, and Gloria, the animals on Under the Umbrella Tree, were Holly’s pets. According to Wikipedia, they were her roommates. If so, they must’ve been the crappiest roommates in the world. Holly seems to be the only one who has a job. How are puppets getting by with such a high employment rate and low work ethic? Who’s pulling the strings? Also, they didn’t have their own rooms: Jacob slept outside, Gloria slept under the umbrella tree, and Iggy slept on a shelf. That makes them pets or freeloading couchsurfers, which probably intersect in any Venn diagram. I must say, however, I was always impressed by that massive umbrella tree. I inspired me to be a tree planter. Or a florist. Or, at the very least, someone who delivers bouquets. That notion bit the dust along with every plant that came into my home. I remain the last person anyone should go to for horticultural advice.

Catchy as it was, the theme song for The Edison Twins never quite did them justice: “Just kids trying to do what they should/Growing up in the neighbourhood/Oh, they’re up the street and around the bend.” How are they “just kids” when they’re geniuses? Were they “up the street” from NASA, where they work, or “around the bend” from their monthly Mensa meetings? Regardless, I thought my older brother and I could be these prodigious siblings. Though certain we could pass for twins (we’re only 20 months apart!), my reticence towards the sciences proved too much of a hurdle. While he often tried to help, once improvising a sketch to explain the process of sublimation, tutorials would often end with him frustratingly asking me “Are you even listening?” Unfortunately, my head tended to be in the clouds I never learned how to identify anyway.

Unlike the Edison Twins, the kids on Ghostwriter used reading and writing clues to solve mysteries.  While I questioned their decision not to contact paranormal experts to explain the presence of the ghost in their lives, I was too in love with Alex (David López) to care. (I sent López 2 handwritten letters intimating I’d make a really good girlfriend for him. I stand by that.) Crushes aside, Ghostwriter wasn’t just a show I’d watch because of a cute cast member (I’m looking at you Home Improvement.) No, Ghostwriter inspired me to move to Brooklyn and set up shop as a spiritual medium. I didn’t realize, though, how much it would cost to move, nor how far Brooklyn was from my Montreal home, since geography, much like science, was not my strong suit. The potential for present-day comparisons to Long Island Medium has been the final nail on that dream coffin.

In this Canadian made-for-TV cinematic gem, Road to Avonlea’s Gema Zamprogna plays Mackie, a self-possessed adolescent who moves from a big city to a rural town following the death of her father. Unimpressed by small-town living, she pretends to be her own male cousin, Mac, in order to infiltrate The Challengers, a gang of wanna-be ne’er-do-wells with a strict no-girls policy. Hang on a sec, though. The Challenger boys have already met Mackie. Yet they don’t seem to find it suspicious that Mac, her alter-ego, looks EXACTLY like her. How common were cousins-who-could-pass-for-twins in this town? Mackie’s assumption of an entirely new identity was a 2 step-process: 1. Lower the pitch of your voice. 2. Tuck all your hair under a cap. So simple! I too could be a master of disguise. Regrettably, the only person I could imitate was my sister since our voices remain indistinguishable, even to my mom. Wishing to avoid her being punished for my life of crime, I decided to disguise myself as someone who knew exactly what their dream was.

Now I’m just wondering if reality will vote me off the show. 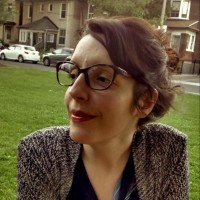 Erica Ruth Kelly is a Montreal-born, Toronto-dwelling freelance writer. A columnist at shedoesthecity.com and a frequent contributor to Maisonneuve's site, her work has also appeared in the Globe and Mail, the Montreal Gazette, Matrix, Rover, and others.