Letter To My Mother After Charleston

Carvell Wallace’s previous work for The Toast can be found here. Donations to Emanuel African Methodist Episcopal Church can be given here.

It was always hard for me to watch things like this with you. You overreacted to everything on the news. I hated that about you. Every storm, every wildfire, every random shooting, every nighttime strangler, you acted as if seeing them on the news would somehow magically make them show up at our apartment door. You issued nonsensical warnings like “Be careful out there. They’re shooting folks for no reason.” It annoyed the hell out of me. I was a teenager then. But then around your mom, you’re always a teenager.

Remember when they were beating Rodney King? You yelled at me in the morning from the living room while I was trying to get ready for school. Come out here you said. They’re beating this man on television. Hurry up. But I didn’t want to hurry up. I was a teenager. You can’t hurry when your mom says hurry when you’re a teenager. You have to take your time. You have to act like everything she says is the stupidest, most unnecessary and most annoying thing in the history of people. You have to believe she’s exaggerating, mom. There’s no way they’re beating a man on television.

But I did come out. And I did see it with my own eyes. Grainy night time camcorder footage, shaky and uncertain. A figure on the ground dressed in white, crumpled to his knees, surrounded by cops. They were kicking the shit out of him. With boots and batons and fists. They were going back for more. They were taking breaks and starting again. Over and over. Beating him like he stole something. Beating him like he had something inside him that they needed to get out.

Whatever, I thought. Yeah, that’s weird, I mumbled. And i went back down the hall. I didn’t want to give you the satisfaction. I didn’t want you to be right.

But you were right, ma. They were beating that man on television.

Back in the bathroom, I finished brushing my hair. Made sure my waves were right. Slapped on deodorant. Combed the thing that, at the time, I felt certain was a mustache. Flexed my pecs a little. Made a few sexy faces. Practiced my effortless cool look. Felt satisfied. I had pretty eyes. Any girl would fall in love with me. I was 15. I was ready for the world.

But then when I went to open the bathroom door, it was locked.

I remember that, ma.

I locked the bathroom door from the inside. Without even knowing it. You didn’t know it either. I never told you. I just unlocked it quietly, got my backpack, hopped on the bus and rode silent through the streets of LA. Fucked around in math class. Passed a quiz in English. Smoked cigarettes instead of going to Biology. Felt like nothing happened.

But seeing them beating that man on television, it must have scared me so deep, in a place so hidden, that I didn’t even know about it. My brain kept playing as though I were a regular teenager. But my body. My body ma. The body you gave me. My body knew the truth. My body locked the door from the inside without me even knowing it.

Today, they killed nine people in an AME church. And I’m glad you’re not here because you’d just be shaking your head and clucking low and quiet, calling on Jesus’ name. You’d be asking what the world was coming to. You’d call Aunt Shirley and Aunt Bev and the three of you would repeat the same things over and over. It’s a low-down dirty shame. Like we’re no better than dogs. What type of evil would possess a man.

I wouldn’t be a teenager anymore. But then I would be because you’re always a teenager around your mom. And I’d be annoyed with you. I’d want you to handle it differently. I’d want you to…I don’t know…do what I do. Write a thinkpiece or say some smart shit on Twitter. Lie alone and stare at the ceiling. Not call anyone. Not talk to anyone. Feel the weight in the pit of your stomach. Lock the door from the inside without even knowing it.

But you wouldn’t do that. You’d talk to whoever would listen. Even if it meant saying the same things over and over.

It’s a low down dirty shame.

What type of evil would possess a man.

And then you’d be quiet for a long time. Staring into space. Chewing the inside of your lip. And finally you’d shake your head slowly. Heavily. And you’d probably say:

And I wouldn’t want you to be right.

But you would be. 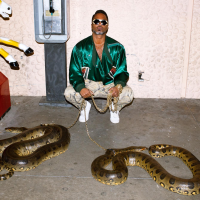 Carvell Wallace is a father, writer and tech founder. If he had cats, he would name them "Melancholy" and "Ennui." He tweets at @carvellwallace.